Two Jewish women pose with a child in front of a newspaper office on a street in Zagreb. 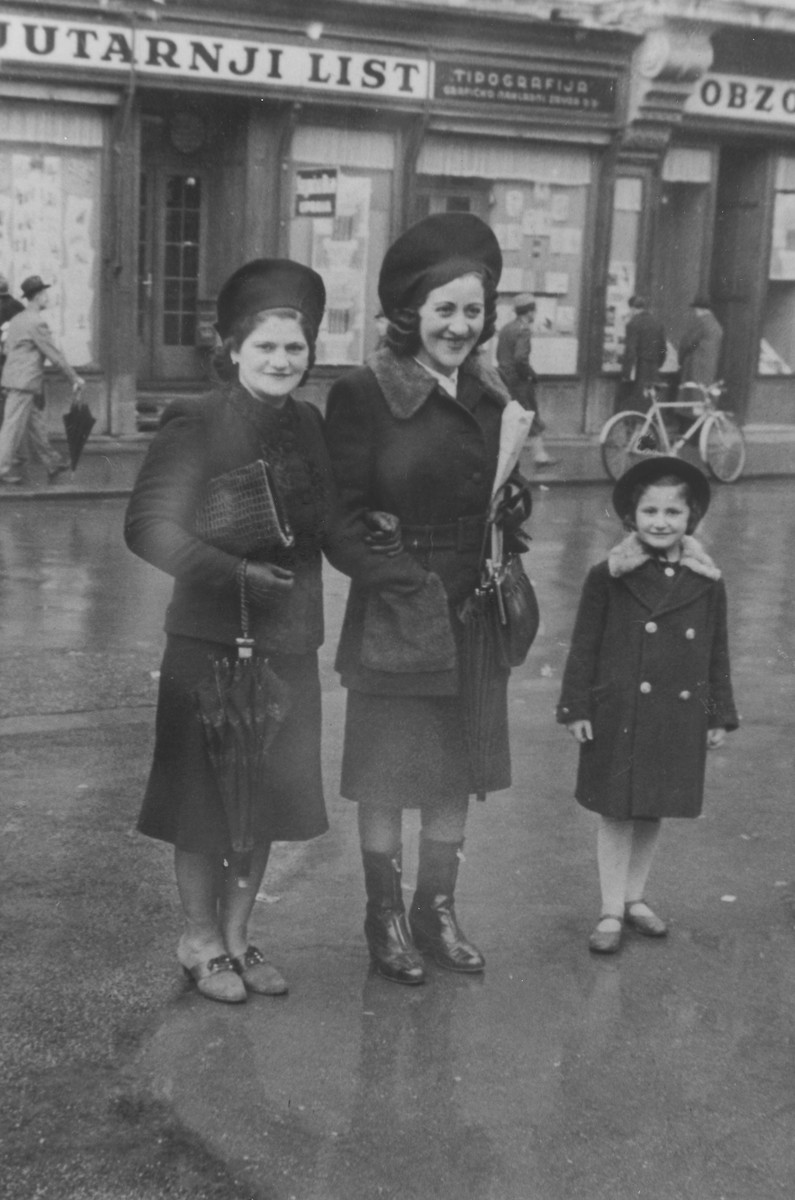 Two Jewish women pose with a child in front of a newspaper office on a street in Zagreb.

Pictured are Emma Romano (left), her daughter, Rena (right) and an unidentified friend (center), who later perished during the war.

Biography
Rena Block (born Rena Romano) is the daughter of Albert and Emma Romano. She was born on August 15, 1935 in Sarajevo, Yugoslavia, where her father was a travelling dry goods salesman. Her great grandfather was Rabbi Avram Mercado, the head of the yeshiva in Sarajevo and a member of the rabbinic court. In 1936 the Romano family moved to Zagreb, where Rena's father bought a dry goods store. One of his managers was a Nazi sympathizer, who bragged that once the local fascists would seize power, he would take over the store. Albert took this warning seriously and quietly removed his savings from the bank. In the spring of 1941 Rena watched as her Croatian neighbors greeted German troops with flowers as they marched into Zagreb. That June the new fascist Ustasa regime issued a decree that set in motion the mass arrest of Jews, who were deemed collectively guilty for acts of sabotage against Croatia. To evade arrest, Albert hid in a local hospital, where a physician friend put him under quarantine. Albert then arranged with a postal worker to take his family to Split, a city on the Dalmatian coast under Italian jurisdiction, in exchange for their apartment and its furnishings. Emma and Rena were taken first, and several weeks later Albert followed, guided by the same postal worker. Upon his arrival in Split, Albert was jailed briefly, and everyday Rena would bring food to him in prison. From Split the family proceeded to Trieste and then, in the late summer of 1941, to Alliagno di Asti in Piamonte. There, Albert and Emma found work as grape pickers, and Rena attended the local Catholic school. Disturbed that Rena was getting a Catholic education, Albert enrolled her at a Jewish boarding school in Turino. He soon brought her back, however, when Turino became too close to the war zone. In 1943, when the Italian police began rounding-up Jewish refugees in northern Italy, the Romanos were taken to the Ferramonti internment camp in Calabria. By the late spring of 1944 the fighting between the Americans and the Germans reached the gates of the camp. At this time the Romanos, along with the other Jewish prisoners, were evacuated by the Americans to the southern coastal towns of Santa Maria and Santa Croce. While living in Santa Croce, the Romanos learned that they had been selected for the American War Refugee Board's Free Port project to bring imperiled European refugees to shelter in the United States, where they would be held without legal status until the end of the war. They sailed from Naples on the U.S. Army transport ship, the Henry Gibbins, arriving in New York on August 3, 1944. From there, they were taken by train to the Fort Ontario refugee shelter in Oswego, N.Y., where they remained until January 1946. After their release Rena and her parents settled in Baltimore, MD.