Fire consumes a barracks in the Bergen-Belsen concentration camp decorated with a wall size portrait of Adolf Hitler. 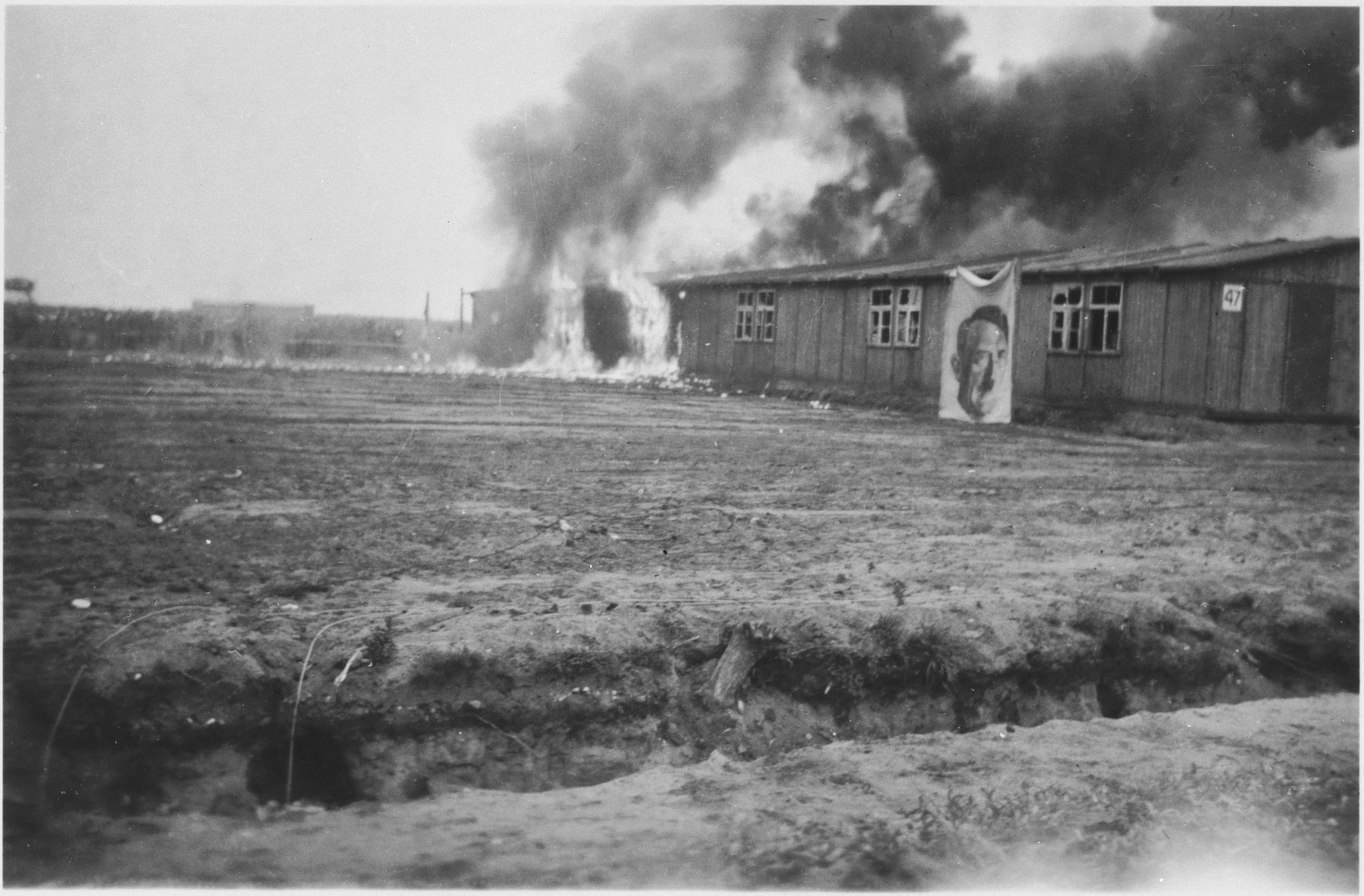 Fire consumes a barracks in the Bergen-Belsen concentration camp decorated with a wall size portrait of Adolf Hitler.

The barracks were burned to control the spread of epidemics.

Event History
Bergen-Belsen, near Hanover in northwest Germany, was established in March 1943 as a special camp for prominent Jews of belligerent and neutral states, who might be exchanged for German citizens interned abroad. Conditions in the camp were good by concentration camp standards, and most prisoners were not subjected to forced labor. However, beginning in the spring of 1944 the situation deteriorated rapidly. In March Belsen was redesignated an Ehrholungslager [Recovery Camp], where prisoners of other camps who were too sick to work were brought, though none received medical treatment. As the German Army retreated in the face of the advancing Allies, the concentration camps were evacuated and their prisoners sent to Belsen. The facilites in the camp were unable to accommodate the sudden influx of thousands of prisoners and all basic services -- food, water and sanitation -- collapsed, leading to the outbreak of disease. By April 1945 over 60,000 prisoners were incarcerated in Belsen in two camps located 1.5 miles apart. Camp No. 2 was opened only a few weeks before the liberation, on the site of a military hospital and barracks. Members of the British Royal Artillery 63rd Anti-Tank Regiment liberated Belsen on April 15 and arrested its commandant, Josef Kramer. The relief operation which followed was directed by Brigadier H. L. Glyn-Hughes, Deputy Director of Medical Services of the Second Army. Between April 18 and April 28, the dead were buried. At first the SS guards were made to collect and bury the bodies, but eventually the British had to resort to bulldozers to push the thousands of bodies into mass graves. Evacuation of the camp began on April 21. After being deloused inmates were transferred to Camp No. 2, which had been converted into a temporary hospital and rehabilitation camp. As each of the barracks was cleared they were burned down to combat the spread of typhus. On May 19 evacuation was completed and two days later the ceremonial burning of the last barracks brought to an end the first stage of the relief operations. Surviving Jewish DPs were transferred to Camp Three on May 21, 1945 from camps 1 and 2. By mid to late May, Bergen-Belsen assumed the status of a displaced person's camp. In July, 6,000 former inmates were taken by the Red Cross to Sweden for convalescence, while the rest remained in the newly-established DP camp to await repatriation or emigration.
Biography
Charles Rennie joined the Canadian Army in the spring of 1941 as a medical officer. In July of that year, he was transferred to the British army and assigned to the 29th British General Hospital, a 1200 bed hospital. About one month after D-Day, the hospital was transferred to the continent and set up in Eekloo, Belgium. On May 20, 1945 the hospital relocated to the newly liberated Bergen-Belsen concentration camp. The hospital staff was responsible for the care of 8,000 survivors. Each medical officer was responsible for 750 beds and the administration of his unit. Rennie communicated to the survivors through interpreters. A large portion of the medical work was done by German intern doctors who themselves had been incarcerated in Bergen-Belsen. The nursing staff included professionals and students from Germany, Britain, Switzerland, France and Belgium. After several weeks of medical treatment, the hospital staff began transferring the patients to Sweden for recuperation. Rennie made three trips from Bergen-Belsen to the port of Luebeck, where the patients were transported by ship to Sweden.