A group of children pose outdoors at a school for Jewish DPs in Munich. 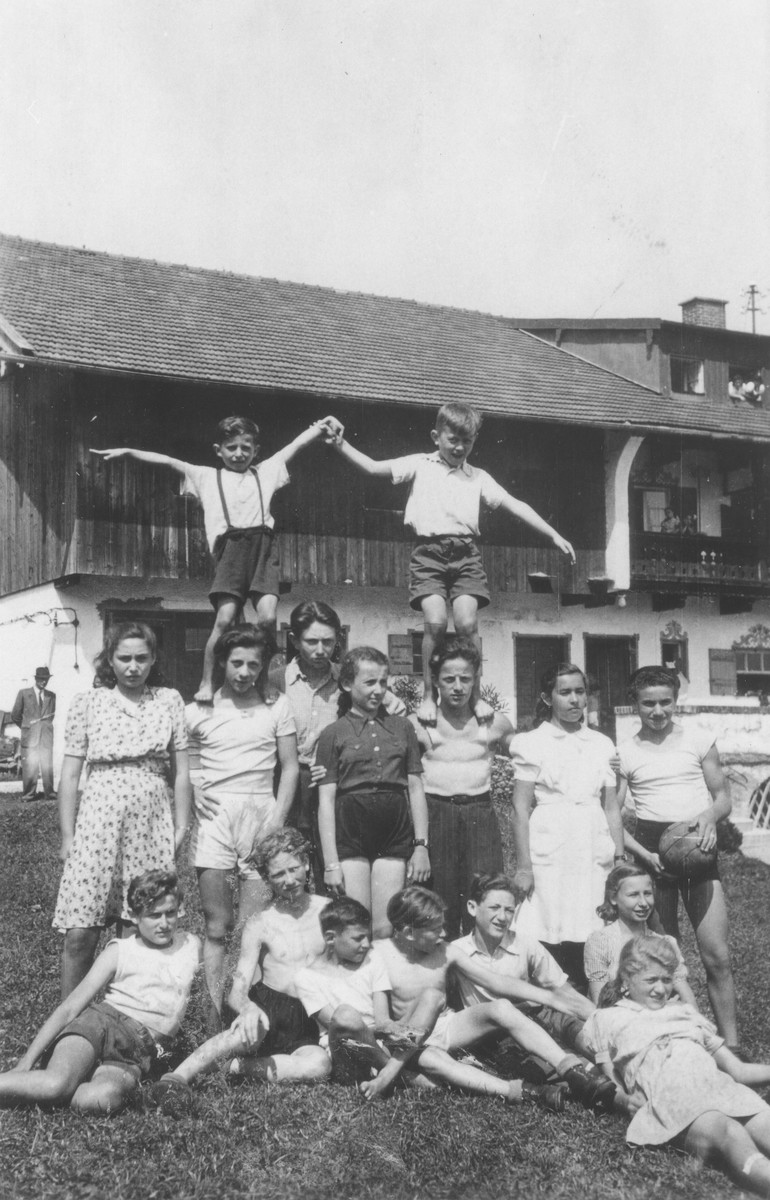 A group of children pose outdoors at a school for Jewish DPs in Munich.

Among those pictured is Ellen Griliches (front row, right side, behind the reclining girl) and Fenny Olitzki (second row, second from the left).

Biography
Grigory (now Zvi) Griliches is the son of Yefim and Clara Griliches. He was born September 12, 1931 in Kovno, Lithuania, where his father worked as a chemical engineer. His younger sister, Ellen, was born in 1933. The family spoke Russian at home, but Grigory attended a Hebrew speaking school. In August 1941, soon after the German invasion of Lithuania, the family was forced to move to a one-room apartment in the newly established ghetto. Grigory's grandmother and aunt lived in an adjacent room. Clara worked outside the ghetto in a rubber recycling plant, which enabled her to smuggle in extra food for the family. Yefim's work as an administrator in the ghetto's labor office protected the family from deportation during the Great Action of October 1941. During his first two years in the ghetto, Grigory spent his days roaming and reading. Later he joined his mother as a laborer in the Guma factory. In 1943 Grigory's sister was smuggled out of the ghetto to a Lithuanian orphanage. When the situation further deteriorated in the spring of 1944, the family built a bunker beneath their home. Though designed to hold eight to ten people, more than twenty eventually sought refuge in it. During the liquidation of the ghetto in early July 1944, the Griliches family stayed underground for four days before their bunker was discovered. Of those hiding with them, one (a former ghetto official) was shot on the spot, and one (a doctor) committed suicide. The rest were brought to an assembly point. As the Griliches and the other captured Jews were marched off to the train station, Grigory's aunt managed to slip away and escape. Grigory and his parents were deported to Stutthof. There the men, women and children were separated. Clara remained in Stutthof with the other women, where she died a few months later from typhus. Grigory, who was tall for his age, was sent with his father and the other men to the Dachau sub-camp of Uting am Ammersee. There, Grigory was put to work carrying sacks of cement and removing earth from a construction site. Six months later on January 7, 1945 his father died from hunger and disease. He was taken out and buried in the forest behind the camp, where Grigory later returned to place a gravestone. After being orphaned, Grigory was given lighter work and cared for by his fellow inmates. On May 2, 1945 fourteen-year-old Grigory was liberated by American troops outside the village of Waakirchen. After a period of recuperation at the army hospital in Bad Tolz, he went to live with his maternal uncle, Solly Ziv, and his two children outside of Munich. His sister Ellen, joined them in 1946, after having been collected from her orphanage and brought out of Lithuania by her aunt. Grigory left Munich in the summer of 1946 and went to the Feldafing displaced persons camp, where he joined a Hashomer Hatzair kibbutz hachshara {Zionist collective]. In January 1947 his group left for Palestine on board an illegal immigrant ship. When it was intercepted at sea by the British, the passengers were taken to an internment camp in Cyprus. Grigory remained there for seven months before being allowed to immigrate to Palestine.