Shmuel Rakowski (top row, center) poses with a group of Jewish survivors from Mukachevo who he escorted out of Poland on a Bricha route. 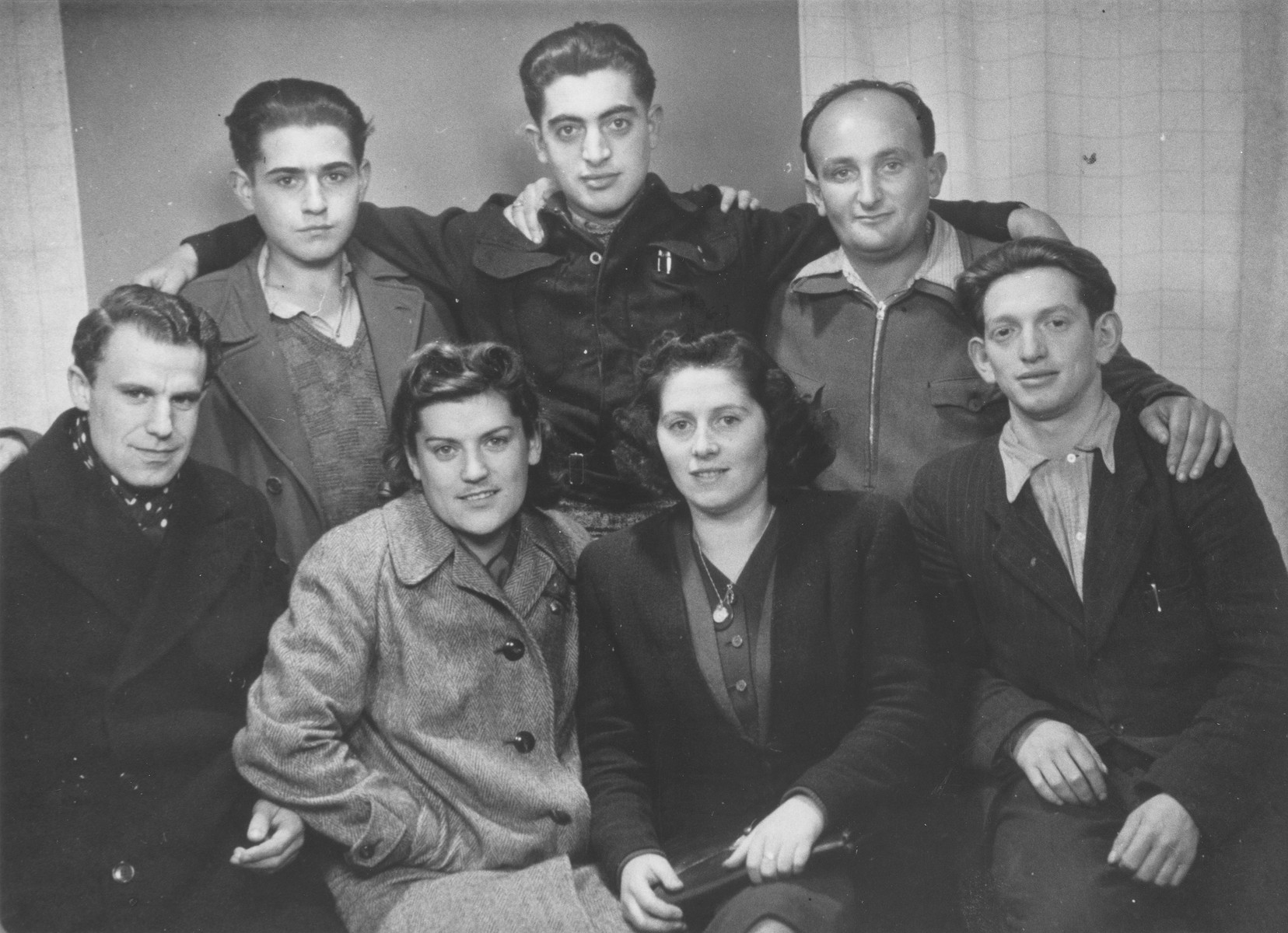 Shmuel Rakowski (top row, center) poses with a group of Jewish survivors from Mukachevo who he escorted out of Poland on a Bricha route.

Event History
Between July 1945 and May 1948 approximately 250,000 Jewish Holocaust survivors fled from eastern Europe to displaced persons' camps in Germany, Austria and Italy, in what was the largest organized, illegal, mass movement in modern times. Both the movement and the organization that directed its flow are known by the name Bricha [flight]. The Bricha was born when groups of Zionist partisan survivors from eastern Europe, who had attempted unsuccessfully to reach Palestine via Romania, made contact with Jewish Brigade troops stationed in Italy. The soldiers offered them the possibility (although limited and illegal) for reaching Palestine via Italy. Together they established the Bricha in Poland, an organization that quickly came under the direction of Haganah (Jewish underground) emissaries from Palestine. Bricha guides led groups of survivors on specially laid out routes from Poland to Italy and Germany. The transit expenses were covered by the American Jewish Joint Distribution Committee, which also provided food and shelter along the routes. Generally, the Soviet authorities turned a blind eye to the illegal migration, the British were hostile, and the Americans were accepting, because they could not use force to stop the flow. The largest wave of the Bricha occurred in the two months following the Kielce pogrom (July 4, 1946) in which 42 Jews were killed in the wake of a ritual murder charge. Over 90,000 holocaust survivors fled in a movement so sudden that the organization could not contain the flow. The goal of the survivors was to reach the American zone of occupation, where they could seek shelter in DP camps until they were able to find the means to emigrate to Palestine or the New World.
https://encyclopedia.ushmm.org/content/en/article/brihah.
Biography
Samuel Ron (born Shmuel Rakowski) is the son of Jozef and Sophie (Banach) Rakowski. He was born July 28, 1924 in Kazimierza Wielka, Poland, where his father was in the lumber business. Shmuel had a younger brother, Israel, who was born in 1927. Following the invasion of Poland in September 1939 the family's business was closed. Prohibited from attending school, Shmuel found work at a local sugar refinery. During the summer of 1942, after the deportation of the Jewish population of a neighboring town, the Rakowskis made plans to go into hiding. In September a sympathetic Polish policeman warned Shmuel's father that the Germans were requisitioning transport for an impending deportation action in Kazimierza Wielka. The Rakowskis fled to a farm a few miles out of town together with the family of Shmuel's uncle, Jozef Banach. After living on the farm for three months, the two families decided to smuggle themselves into the Krakow ghetto, reasoning it was safer for them there than isolated in the countryside. The Rakowskis and Banachs moved in with the family of Shmuel's aunt, Sally (Banach) Levenstein, in a one-room apartment. Several family members found work at Oskar Schindler's factory in Zablocie, while Shmuel and his uncle were employed in a metal factory. When the Krakow ghetto was liquidated in March 1943 Shmuel was taken to the Plaszow concentration camp. Seven months later he was transferred to the Pionki labor camp, where he worked in a munitions plant. He remained there until July 1944 when the plant was dismantled and its labor force transferred to Sachsenhausen to rebuild it there. In Sachsenhausen Shmuel was put to work in an airplane factory. He was also involved in the manufacture of grenades and was, on occasion, detailed to dig up unexploded bombs in nearby Berlin. In April 1945 Shmuel was put on a forced march that lasted for three weeks until the prisoners were liberated by the Americans on May 2. Soon after the war Shmuel returned to Poland to look for his family. There he learned that his brother died in Mauthausen in March 1945. Shmuel did, however, find his mother and aunt who had survived imprisonment in Skarzysko-Kamienna and Gross Rosen. He spent the next six months tracking down his father, who had survived Mauthausen and was recuperating in a hospital in Austria. After his father's release they moved into the Bindermichl displaced persons camp in Linz. Shmuel soon became involved with the Bricha movement and spent most of his time between August 1945 and March 1946 guiding Jews along its routes from Poland to Germany. In April 1946 Shmuel accompanied one last group of Jewish DPs, a transport of 1100 children, who were sailing to Palestine from Marseilles on board the SS Champollion. Upon his arrival he was granted a legal immigration certificate. Shmuel's parents immigrated to the United States aboard the Marine Perch in January 1947.