False Polish baptismal certificate issued to the Jewish child Yona Kunstler during World War II while she was in hiding under the assumed name of Yanina Lesiak. 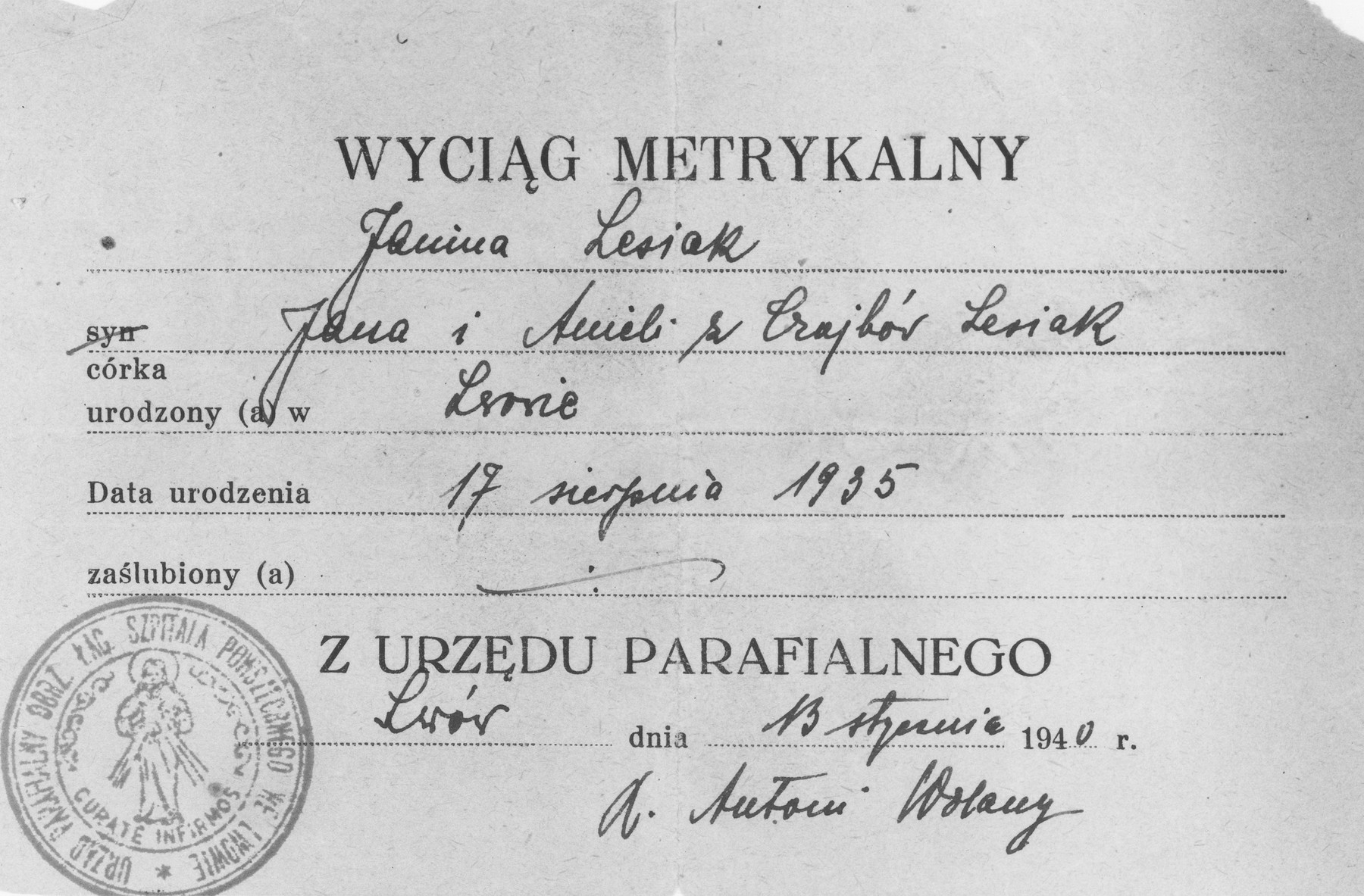 False Polish baptismal certificate issued to the Jewish child Yona Kunstler during World War II while she was in hiding under the assumed name of Yanina Lesiak.

Biography
Yona Nadelman (born Yona Kunstler) is the daughter of Philip and Henryka (Spira) Kunstler. She was born on May 4, 1934 in Krakow where her father practiced law. The Kunstlers enjoyed a close relationship with the family of Henryka's brother, Maurycy Spria, whose wife Irena died shortly after the birth of their son Gabriel (b. 1935). Soon after the German invasion of Poland, Yona and her parents fled eastward along with Maurycy, Gabriel, David and Salomea Spira (Henryka's parents), Frania (Irena's sister) and her husband Max. When Yona's grandparents felt they could travel no further, Maurycy stayed with them in Slomniki and entrusted Gabriel to Frania and Max. The rest of the family crossed through a burning forest and arrived in Lutsk, in the Soviet sector. Philip and Henryka continued on to Tarnopol, Philip's hometown, and Frania and Max took Gabriel to Kolomya where they had relatives. The Kunstlers moved in with Philip's brother Markus, the owner of a candy factory, his wife Dziunia and son Jakob (Kuba); his sister Regina lived in the same building. One day a Soviet commissar requisitioned Markus's apartment, and all three families had to squeeze into Regina's apartment. The Soviet police began massive deportations to Siberia in the late spring of 1941. Philip, an active Zionist, was on the deportation list, and therefore he and Henryka went into hiding. When they felt it was safe, they returned to Regina's apartment only to be arrested that night. When the Soviet secret police came to the flat, Philip pretended that Yona was his niece rather than his daughter in order to save her from deportation. A few days later, Regina took Yona to a bridge overlooking the railyard to catch a final glimpse of her parents before they were sent to Siberia. In June 1941 Dziunia decided to visit her mother in Zloczow. She brought her son Jakob and Yona with her. While they were there, the Germans launched their surprise invasion of the Soviet Union. Zloczow was bombed, and Dziunia's home was destroyed. Dziunia worried she would be unable to return to her husband. Pretending she was Polish, she asked the Germans for travel permits to return to Tarnopol with Yona and Jakob. When they returned, they discovered that a ghetto had been established in Tarnopol. Sometime that winter, Maurycy decided it was better for Yona to live with her grandparents, David and Salomea, in Slomniki, where there was no ghetto. As a major seed merchant and distributor, Maurycy had certain privileges and connections. He sent Wladek, a Polish workman, to fetch Yona from the ghetto and bring her to her grandparents in Slomniki. Maurycy also brought Gabriel there. For the next year, Yona and Gabriel lived with her grandparents, played with their neighbor's children, saw Maurycy on the weekends, and lived a fairly normal life. One day Uncle Maurycy received news from the Swedish Red Cross, informing him that Yona's parents had perished during their journey through Siberia. Then in early June 1942, the Gestapo rounded-up the local Jewish population. Yona's grandparents pleaded with Yona and Gabriel to hide with their Polish neighbors. Yona refused to leave her grandparents, but they removed Gabriel to their neighbors while he was sleeping. Yona and her grandparents were taken to a schoolhouse where they were locked in one room. The Gestapo ordered the men to dig trenches and prepared to kill those assembled. Suddenly, David, Salomea and Yona were pulled out of line and told they were going elsewhere. Through his connections Maurycy had arranged for their transfer to the Krakow ghetto. He further decided to send the children into hiding. He brought them to his warehouse where they stayed until false identity papers could be prepared. Under the assumed names of Yanina and Gabriel Lesiak, the children were brought to the farm of a retired professor of classics in Klecza Dolna. They stayed with the professor, his wife and their three adolescent daughters until the end of the war. As they were retreating, the Germans commandeered the farmhouse and vacated the premises only hours before the Soviet army took control of Klecza Dolna on January 17, 1945. Yona and Gabriel remained on the farm until July when Yona's father appeared. Contrary to the Red Cross notice, her parents had survived the war in the Soviet interior. Yona then returned to Krakow to live with her own parents, but the professor would not allow Gabriel to go with them, insisting that only Maurycy could reclaim the boy. Yona's father had to go to court to gain custody of Gabriel, whose father did not survive the war. Sometime later, Philip was arrested by Polish communists and held in a jail in Krakow. Henryka sent Yona, Gabriel and another cousin, Stefa Grossman, to Lodz to join a children's transport out of Poland. Bricha guides escorted the children across the border on foot through Czechoslovakia to Vienna. From there, they went to a series of DP camps, eventually settling in Ulm Dornstadt, a children's camp in the Stuttgart district. After Henryka received permission to leave Poland in the spring of 1946, she came to pick up Yona and Gabriel and brought them to Paris. Philip joined them about one month later after his release from prison.