Pola and Serafina Strasser go skiing with a friend. 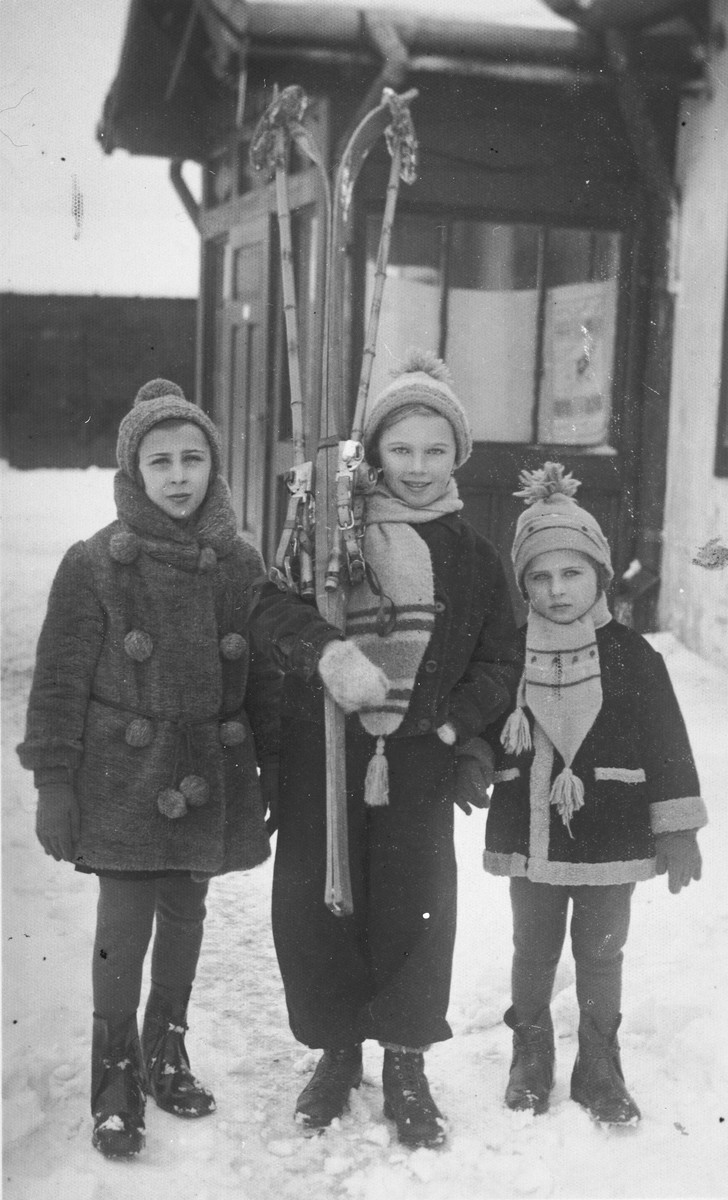 Pola and Serafina Strasser go skiing with a friend.

Biography
Charlotte Elmowitz (born Serafina Sharlotta Strasser) is the daughter of Max and Klara Strasser. She was born on May 8, 1930 in Vienna where her father was working and learning the oil drilling business. Shortly after her birth her family returned to their hometown of Boryslaw in the Polish Ukraine where her father established a successful oil drilling business. Serafina had one older sister, Pola. After the start of World War II, Boryslaw first fell under Soviet occupation. When Germany invaded the Soviet Union in the summer of 1941 Max wanted to evacuate with the Russians, but Klara would not leave their house and family. On July 1, 1941,German troops entered Boryslaw and almost immediately local Ukrainians led pogrom against the town's Jews whom they blamed for the Soviet occupation. Max and Klara ran to woods and Pola and Serafina hid in a neighbor's cellar for two days. About 200 Jews were killed in the pogrom but her entire family survived. They returned to their home, but in November Christian neighbors warned them there would be another pogrom. The Strassers again hid sucessfully, but Serafina's Aunt Mina and her young son Jozio were hacked to death. Another infant cousin was killed after being thrown against a wall by German soldiers. In August 1942 rumors circulated that there would be deportations of all but able-bodied workers. Ringel, a Polish-German engineer who was friend of Max, offered to hide Serafina in his attic. After three days, she returned home to find her father in hysterics. She learned that 6,000 Jews were deported from Boryslaw including Klara, Pola, Serafina's grandparents, aunts and cousins. They were taken to Belzec and gassed upon arrival. For the next two months, Serafina and Max lived alone in the house though he left every morning for forced labor escorted by Ukrainian guards. In October 1942 all remaining Jews in Borylsaw were forced to move into a ghetto. Max and Serafina shared a room with three uncles and her one surviving cousin, nine-year-old cousin Cesia. One day police began chasing people and shooting at them. Cesia and Serafina fled the ghetto and ran to Cesia's former house, now inhabited by her former maid. She refused to let them stay and laughed at their predicament. They split up and Serafina went to home of a Ukrainian woman who agreed to hide her for several days. A priest who knew Max gave Serafina a new birth certificate under the name Janina Koslovska. Serafina next hid with Polish woodsmen, Mr. and Mrs. Sobkowicz, who lived in the forest. They treated Serafina very well, and she became friendly with their two children, especially their daughter Polda who was her age. Max continued to work in his field of oil exploration and was therefore allowed to leave the leave labor during the day. Sometimes he succeeded in visiting Serafina. While attending Christmas mass with them, Serafina was spotted as a Jew and had to flee. Max gave the Sobkowiczes money to build and underground bunker, and she remained with them though totally hidden from view. However, rumors spread that Jews were hidden in the neighborhood, and Germans began a search. They found her and arrested her. She was released from custody after Max pleaded on her behalf, but she had to find a new hiding place. Max had given their home to a young couple in exchange for a promise for help if the occasion arose, and Serafina next returned to her former home in Boryslaw until she could find something more secure. The young wife was very maternal and took good care of her, but one day she left to run and errand and look for a new hiding place for Serafina. While she was gone, her husband raped Serafina. She ran away looking and spent next several months alternating between four or five places of refuge. She finally found shelter with an old woman who had a hut in the woods not far from the labor camp. Serafina was able to establish eye contact with Max who then knew she was safe. She left after she visited the woman's son who bragged about having killed a Jew. Serafina then lived in the woods foraging from sympathetic Ukrainians, including the Sobkowicz family who always willingly gave her food. Max remained in the camp in the summer of 1944 as the war wound down in the east. As Russian troops approached the area, he planned an escape with his friend Mr. Einstadt. After the Gestapo evacuated the camp, Max met Serafina and told her to wait for him in the home of Mr. Sobkowicz while he returned to the camp to get Mr. Einstadt. As soon as he returned he was rounded up by Ukrainians and forced on a train west. Meanwhile, his friend had already left the camp deciding not to wait for Max. After liberation, Serafina was placed in orphanage, but she escaped to go to Krakow to look for any surving family. Though she found three uncles, she learned that her father had perished in Mauthausen. For the next two years she lived with her uncles in Munich, and in June 1947, Serafina joined a transport of Jewish orphans and immigrated to the United States on board the Ernie Pyle.