Children and teachers in the Tarbut school in the Rochelle displaced persons' camp. 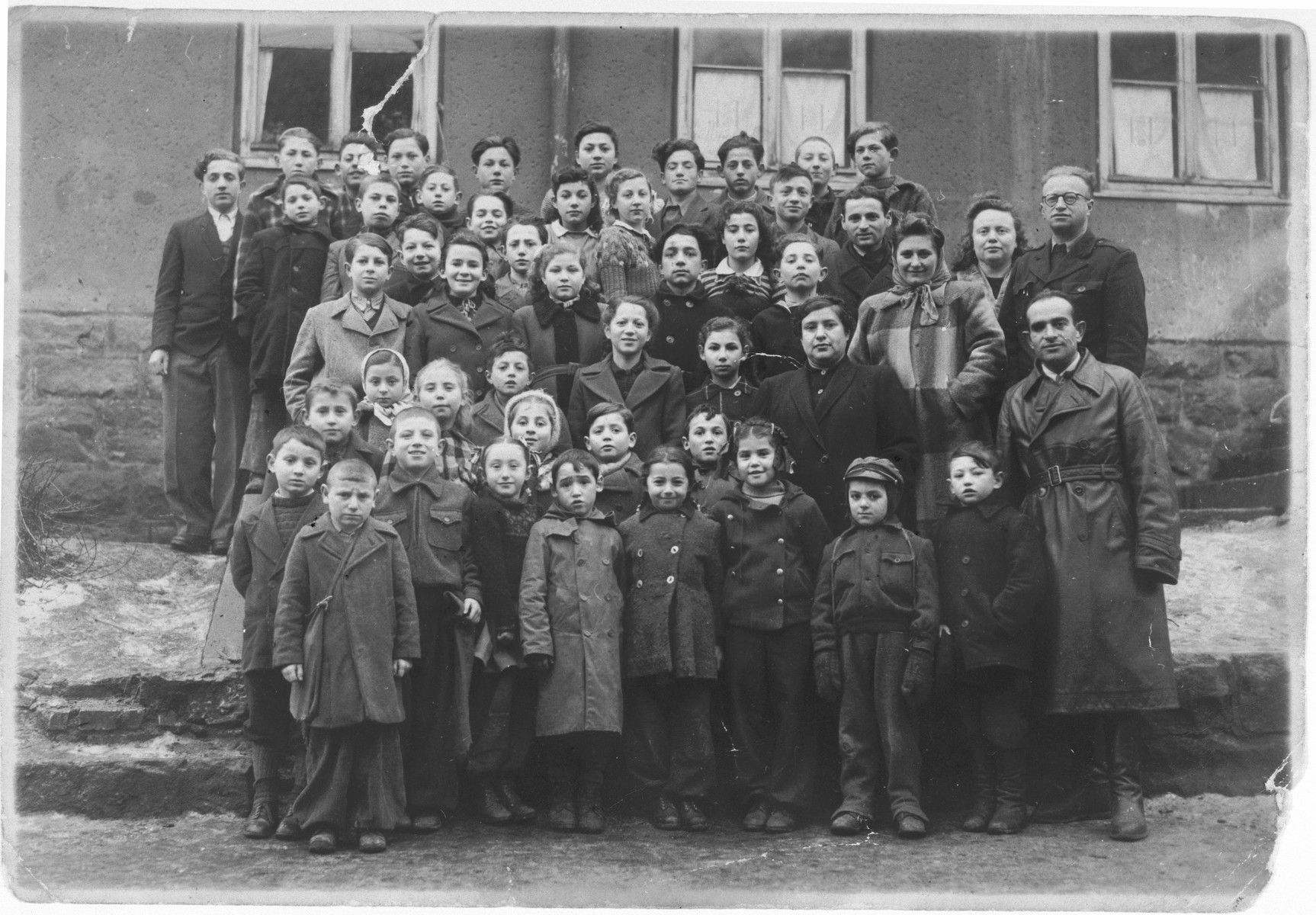 Children and teachers in the Tarbut school in the Rochelle displaced persons' camp.

Biography
Sylwia Richter (born Sylwia Laufer) is the daughter of Shimon and Fridjeh Frisch Laufer. She was born on March 14, 1937 in Halicz, Poland where her father, an upper-middle class businessman, owned a lumberyard and a variety store. Her mother (b. 1912) occasionally assisted him in the business. Sylwia had one younger brother Dawid Daniel born on April 6, 1939. After the Germans entered Halicz in 1941, they robbed the Laufers of many of their possessions, and one SS officer stationed himself in their home and ate meals with the family. After Sylwia's father was beaten for refusing to obey an order, the family left town to seek refuge with Sylwia's grandparents in the small village of Ustye Zelenoye, 12 miles away. When they discovered that the situation was not much better there, the family, along with Sylwia's maternal grandparents and two aunts and uncles, went from village to village seeking a safe haven. In 1942 Sylwia's grandmother, Rivka Frisch, became ill and died from a ruptured appendix. In September 1943 her uncle Srulka approached Mr. Plotkowski, a business acquaintance from the remote village of Cenkow, asking for protection. He told them they could hide in his hayloft above the stable. Mr. Plotkowski prepared a sleeping area for the family with blankets and pillows, and his wife prepared whatever meager food she could which Mr. Plotkowski or his oldest son, Jan, delivered daily. The adults supplemented these small rations by foraging at neighboring farms by night. Mr. Plotkowski housed nine people in his stable, and built a small partition in case of emergencies. The Plotkowski's two younger children never knew they were there. Soon after their arrival rumors spread that the Germans were intensifying their search for Jews, so the family hid in a dirt ditch until the danger subsided. Both the Laufer and Frisch families stayed on this farm for approximately four months, but then realizing that there were too many people hiding in one place, Sylwia's uncles moved their families to other farms nearby. Initially the Laufer family had offered the Plotkowskis fabrics and jewelry in exchange for refuge. However, in mid-December 25, 1943 the Germans posted signs and warnings announcing that anyone harboring Jews would be killed. Mr. Plotkowski came to the hayloft to return the merchandise fearing his life would be in danger if anyone spotted the goods. He told them that Germans were intensifying their searches of the area, and that one Polish farmer, caught shielding Jews, had already been killed. He told the family that they had to make plans to go elsewhere. Sylwia's father went to his brothers-in-law for help in finding a new hiding place. When after two weeks, Sylwia's father did not return, the family suspected the worse. Mr. Plotkowski soon confirmed their fears and told them that Sylwia's father and uncle had been killed. He also told Mrs. Laufer that she could remain at the farm with her two children. They remained in the hayloft for a total of nine months. After their liberation by the Russians in June 1944, they stayed for an additional two weeks to make sure they were really safe. Fridjeh then returned to Halicz to search for family. She also recovered many of the family's possessions that had been cared for by a former maid. The family was then briefly placed in a Russian camp before being allowed to return to western Poland. After living briefly in Bitom where Sylwia attended a Catholic school, Fridjeh and her children made there way to the Babenhaus DP camp in Germany. After two or three months they moved to Roshel-Eschenstruth near Kassel. Fridjeh married Leib David, a first cousin who had been in the Russian army and who found her after the war, and the family immigrated to the United States. Jan Plotkowski is listed in Yad Vashem as a Righteous Among the Nations. [Biography based on interview with survivor and Maxine Rosenberg's Hiding to Survive]