A boy dressed in a sailor suit walking along a road views a Jewish family sitting in the grass at the side of the road. 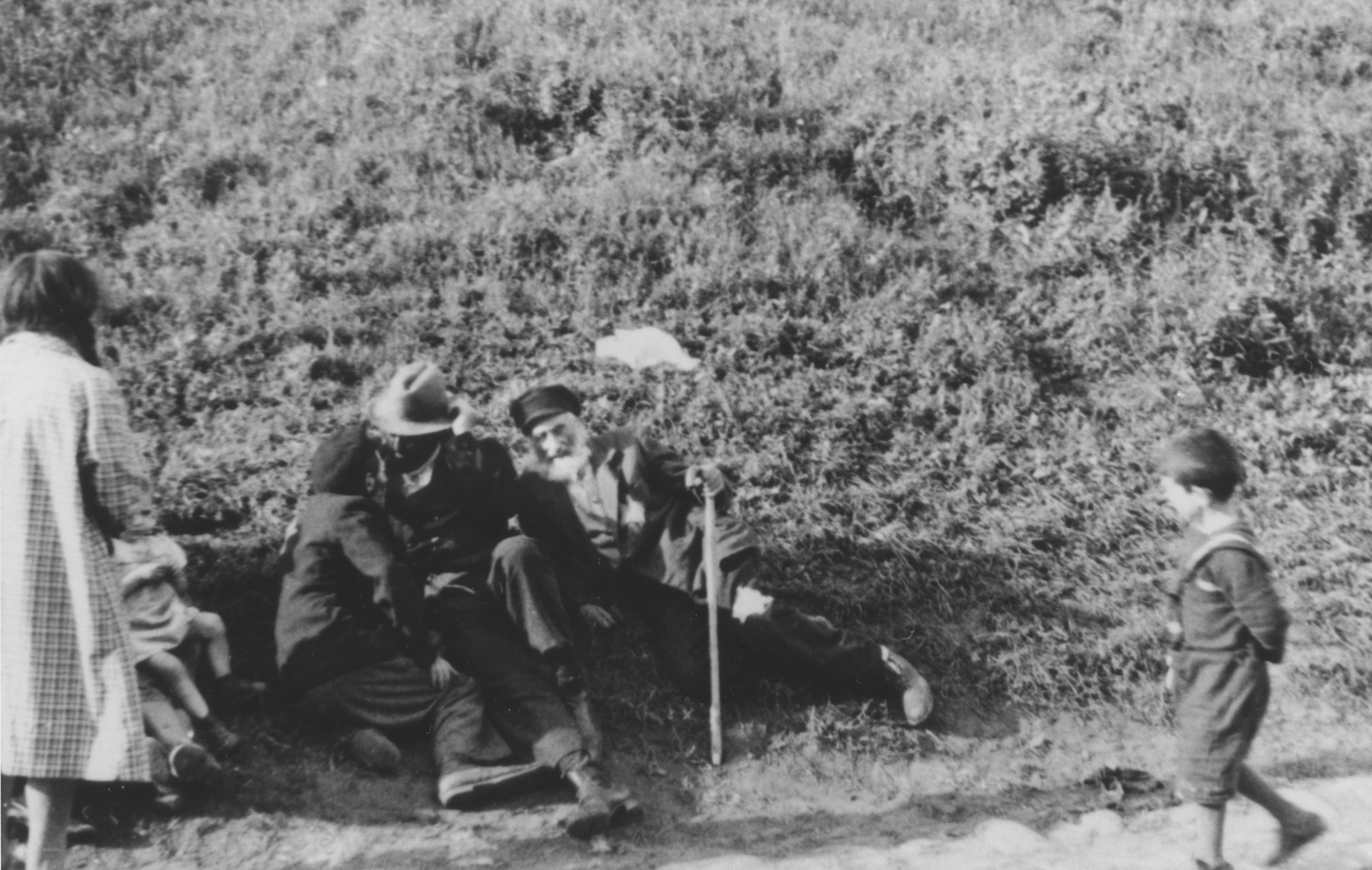 A boy dressed in a sailor suit walking along a road views a Jewish family sitting in the grass at the side of the road.

Event History
Reserve Police Battalion 101 was a unit of the German Order Police [Ordnungspolizei or Orpo] that during the Nazi occupation of Poland played a central role in the implementation of the Final Solution against the Jewish people and the repression of the Polish population. Members of the battalion participated in the round-up and expulsion of Jews, Poles, and Roma, the guarding and liquidation of ghettos, the deportation to concentration camps and the mass shooting of tens of thousands of civilians. Raised in Hamburg, Battalion 101 was one of thirteen police formations that were put at the disposal of the German army during its invasion of Poland in September 1939. Members of the battalion crossed into Poland at the border town of Oppeln and then moved through Czestochowa to Kielce, where they rounded-up Polish soldiers and military equipment and guarded a POW camp. On December 13 the police battalion returned to Hamburg where many of its recruits were transferred to other units and replaced by middle-aged reservists. In May 1940 the battalion was again dispatched to Poland where it was engaged throughout the Wartegau (the districts of western Poland formally annexed by the Third Reich) in the expulsion and resettlement of Poles, Gypsies and Jews. It is estimated that close to 37,000 people were evacuated by Police Battalion 101 alone in a five month period during the spring and summer of 1940. Following the resettlement actions the battalion was involved in efforts to hunt down Poles who had evaded the evacuation order. On November 28, 1940 the police battalion was re-deployed to guard the perimeter of the Lodz ghetto, which had been sealed seven months before. These policemen had a standing order to shoot any Jew who came too close to the fence that enclosed the ghetto. In May 1941 Police Battalion 101 was sent home to Hamburg, where it was totally reconstituted. After most of its earlier recruits were distributed to other police units, its ranks were filled with drafted reservists. While most of its members still hailed from Hamburg, a group from Luxembourg now joined its ranks. For the next twelve months the new battalion underwent extensive training in and around Hamburg. This period coincided with the deportation to eastern Europe of the Jewish population of Hamburg and its environs in four transports that departed between October 25 and December 4, 1941. Members of Police Battalion 101 were involved in several aspects of the deportation process, including the guarding of the assembly center (at the Freemason Lodge in Hamburg) and the Sternschanze train station, where the Jews were boarded onto trains, and the escorting of transports to their final destinations: Lodz, Minsk and Riga. In June 1942 Police Battalion 101 was sent back to Poland. Posted to the Lublin district, the battalion arrived during a temporary lull in the mass deportations of Jews to the three Operation Reinhard killing centers of Belzec, Sobibor and Treblinka. For the next four weeks members of the battalion were deployed in rounding-up Jews from smaller settlements and concentrating them in larger ghettos and camps, particularly Izbica and Piaski, the two major assembly camps in the southern Lublin district. Beginning in mid-July 1942 with the round-up of Jews in the town of Jozefow near Bilgoraj, members of Police Battalion 101 were utilized for the mass shooting of Jewish civilians in towns throughout the Lublin district. These included (in addition to Jozefow) Lomazy (August 1942), Miedzyrzec (August 1942), Serokomla (September 1942), Kock (September 1942), Parczew (October 1942), Konskowola (October 1942), Miedzyrzec (a second action in October 1942) and Lukow (November 1942). Police Battalion 101's participation in the Final Solution culminated in the Erntefest [Harvest Festival] massacre of November 3-4, 1943. In the course of this killing action, perhaps the largest directed against Jews of the entire war, an estimated 42,000 Jewish prisoners at the Lublin district concentration camps of Majdanek, Trawniki and Poniatowa were wiped out. It is estimated that during the period between July 1942 and November 1943, Police Battalion 101 was alone responsible for the shooting deaths of more than 38,000 Jews and the deportation of 45,000 others. In the final sixteen months of the war Police Battalion 101 was engaged in actions against partisans and enemy troops. Almost all battalion members survived the collapse of the Third Reich and returned safely to Germany. In the immediate postwar period only four members of the unit suffered legal consequences for their actions in Poland. These policemen, who were arrested for their part in the killing of 78 Poles in the town of Talcyn, were extradited to Poland in 1947 and tried the following year. Two were sentenced to death and two to prison. It was not until 1962, however, that Reserve Police Battalion 101 as a whole came under investigation and legal prosecution by the Office of the State Prosecutor in Hamburg. In 1967 fourteen members of the unit were put on trial. Though most were convicted, only five received prison terms (ranging from five to eight years), which were subsequently reduced in the course of a lengthy appeals process.