A group of Jewish DPs gather around a table in Koeslin, Poland. 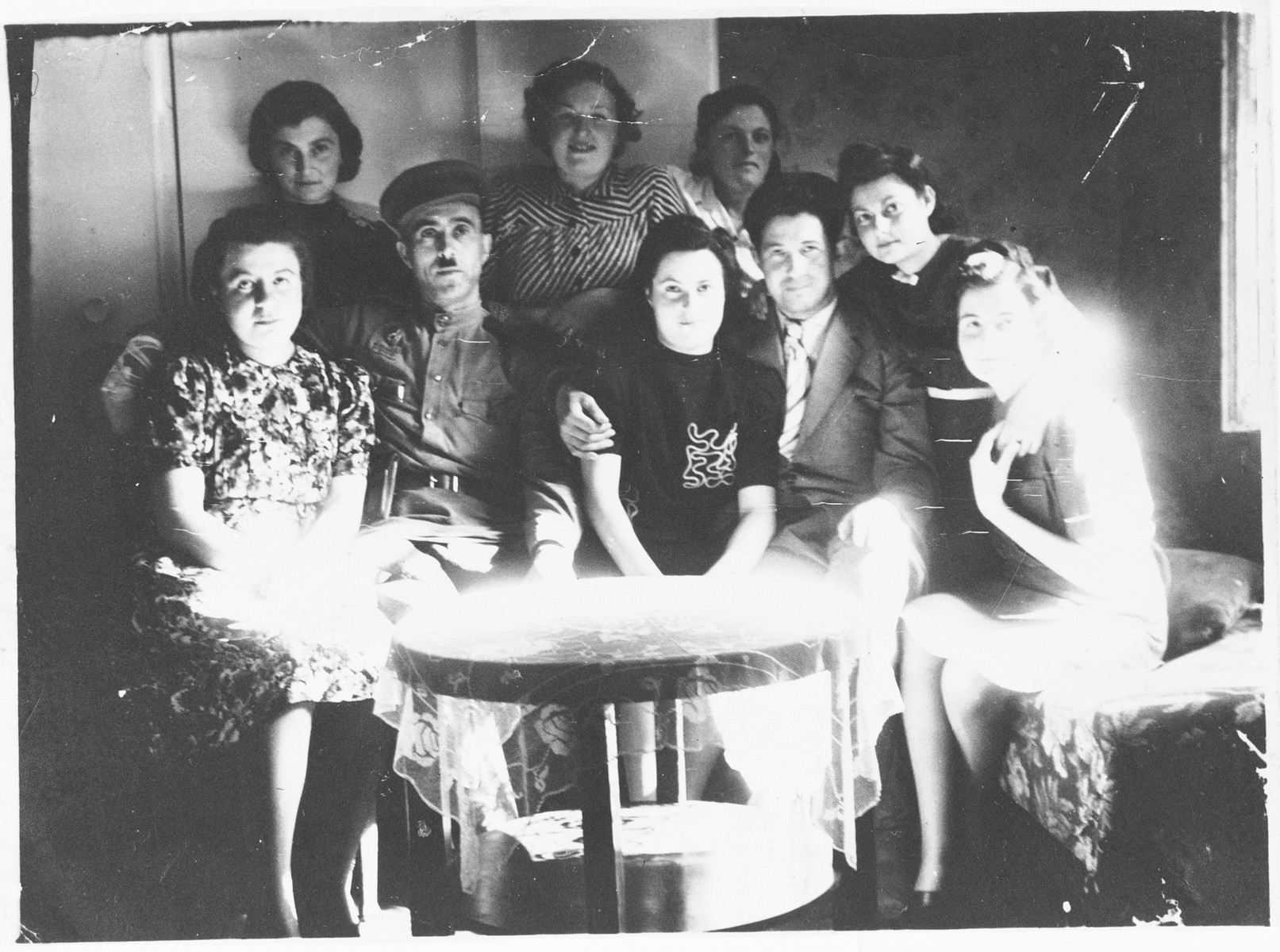 A group of Jewish DPs gather around a table in Koeslin, Poland.

Pictured seated in the front row, from left to right, are: Esther Poupko, unknown, Susanne Strauss, her fiance Herman Taube, Gerda Lehman and Vera Sklan. Standing behind in the center is Hannelore Marx.

Biography
Susan Taube (born Susanne Strauss) is the daughter of Hermann and Bertha Strauss. She was born January 9, 1926 in Vacha, Germany, where her family had lived for over 400 years. Susanne had a younger sister, Brunhilde (b. 1928). In 1937, after the Jews were prohibited from attending public school by the Nazi regime, Susanne and her sister moved to Frankfurt to study at the Jewish school. The following year during the Kristallnacht pogrom of November 9-10, 1938, Hermann was arrested and sent to Buchenwald. Soon after, Bertha took the girls to Berlin, where they moved in with Hermann's mother, Jettchen Strauss. After his release from Buchenwald, Hermann fled to Belgium, and from there, immigrated to the United States in February 1940. The women remained in Berlin. On January 25, 1942 they were deported to Riga, where they were resettled in a ghetto. Shortly after their arrival, on February 4, Jettchen was removed from the ghetto and killed. The others remained in Riga working at various sites until the liquidation of the ghetto in October 1943. At that time they were sent to the nearby Kaiserwald concentration camp. Upon their arrival Susanne was separated from her mother and sister. While they were put to work repairing military uniforms, Susanne was sent to the Meteor factory to fix and paint pontoon boats. Susanne remained at the plant until the end of July 1944, when she was returned to Kaiserwald. On August 6 she was transferred by boat to the Stutthof concentration camp, and two weeks later, was sent to the Sophienwalde subcamp. There, Susanne was put to work uprooting trees, paving roads and building houses. In January 1945 when the camp was evacuated, Susanne was marched with a group of prisoners 150km in the direction of Stutthof. They marched for ten days until reaching the town of Loewenberg, where they remained for about a month, before being moved further away from the advancing Soviet Army. She was finally liberated by the Russians on March 10, 1945. Neither her mother nor her sister survived. After the liberation Susanne was forced to work for the Russians. First she was sent to work on a farm and later was taken to Koszalin, where she cleaned and prepared various types of equipment for shipment to the Soviet Union. While in Koszalin, Susanne met Herman Taube. A Polish Jew from Lodz, Herman had fled to the Soviet Union soon after the outbreak of the war and later served in the Polish army-in-exile. In the spring of 1945 he was administering a hospital in the district of Pomerania and had come to Koszalin to look for medications. Herman and Susanne were married in July 1945. They soon made their way to Germany, where they lived briefly in the Ziegenhain displaced persons camp before settling in the town of Alsfeld. The couple immigrated to the United States in April 1947, where they were reunited with Susanne's father. Herman Taube later became the author of numerous works of poetry and prose, many of them about his World War II experiences in Poland and the Soviet Union.