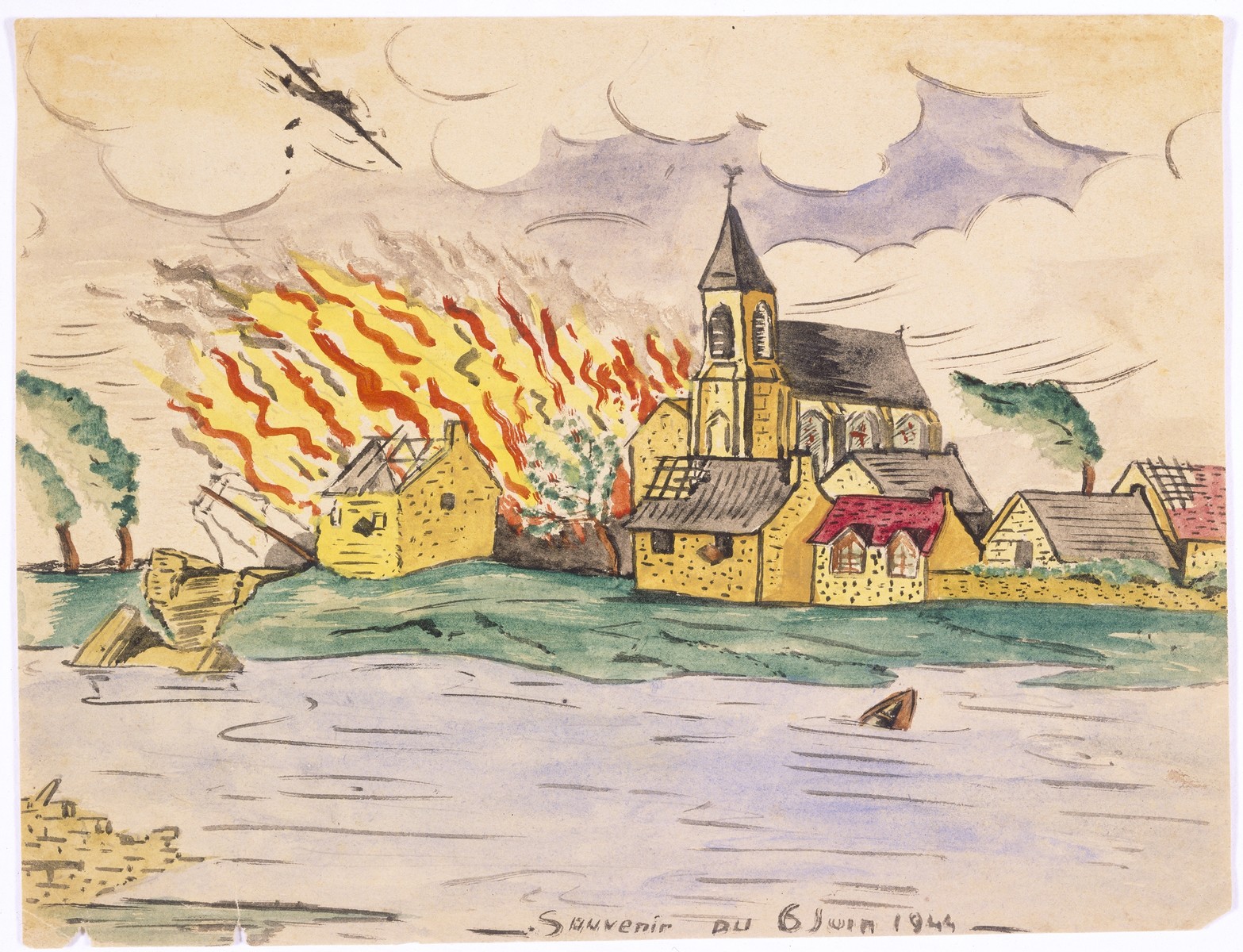 Having learned of the Allied invasion on a shortwave radio, the artist depicts the bombing and burning of a town that is situated on a river.

Biography
Simon Jeruchim is the son of Samuel and Sonia (Szpiro) Jeruchim. He was born December 25, 1929 in Paris, France. Simon had two siblings, Alice (b. February 18, 1928) and Michel (b. April 4, 1937). His parents were both Jewish emigres from Poland. His father worked as watchmaker in Paris, and the family lived in nearby Montreuil. When World War II started in September 1939, the Jeruchims were vacationing in Richebourg, a village in Normandy about an hour by train from Paris. It was decided that Simon and Alice would remain in Richebourg, while Michel would return to Paris with his parents. The two older children stayed in Normandy until their father was able to retrieve them on December 24, 1939. The Jeruchims lived at home in Paris until the German occupation of the country in May 1940. At that time Simon and Alice left with their father on a long trek south to Orleans. Travelling on foot and by bicycle, they were hampered by the flood of refugees and blocked roads. They stopped in St. Savinen to await Sonia and Michel. They remained there for two months before learning that Sonia and Michel had had to return to their home in Paris. Samuel and the older children then returned to Paris as well. For the next two years, the family remained at home, where they were forced to carry special Jewish identification cards and cope with meager food rations. On July 16, 1942, Sonia learned of the impending round-up of French Jews in Paris. She and Samuel arranged hiding places for the children, but were seized before they found a place for themselves. They were among the almost 13,000 Jews who were arrested in the Paris round-up and confined to the Vélodrome d'Hiver. From there, they were sent to Drancy and then deported to Auschwitz, where they perished. After the round-up, Simon stayed with Christian friends until they could arrange a hiding place for him in a remote part of western Normandy. In September 1942, Simon was sent to the farm of Madame Huard. She sheltered him in exchange for his working long hours as a farm hand. Inadequate winter clothing made these tasks all the more difficult. At first Simon was forced to live in the barn, but later was allowed to move into the house. In April 1943, he was transferred to another home in Normandy owned by Madame Prim. Though his new home was smaller and more crowded, Simon had fewer chores and more freedom. He also was able to see his sister Alice occasionally. Madame Prim already had two children in her care, who Simon suspected were also Jewish, since they were not familiar with the Catholic prayers. On one occasion, Madame Prim sent Simon to attend a school meeting in her stead. There, he met the schoolmaster, M. Crochet who offered to lend Simon books from the library. Simon expressed to him his interest in art and his desire to draw again. M. Crochet then left the room and returned with a wrapped gift of a sketchpad and set of watercolors. Simon used these art supplies to depict his life in hiding, including the farmer who rescued him, the home of Madame Prim and the church he attended in Savigny-le-Vieux. Simon later moved to a larger house in the hamlet of La Renouardiere, where he befriended his neighbors, the Geslins. He went there after he completed his chores and often followed the Allied advance on Père Geslin's clandestine short wave radio. After his liberation in August 1944, Simon returned to Paris. There he stayed with the Bonneaus, Huegenot friends of his parents, and enrolled in his last year of high school. His siblings Michel and Alice, who had hidden separately, joined him a little later. All three went to live in a children's home in Cailly-sur-Eure. After finishing high school, Simon enrolled in art school, and along with his siblings, immigrated to the United States in 1949 or 1950.