Leon and Dorota Reichman go for a walk on their honeymoon. 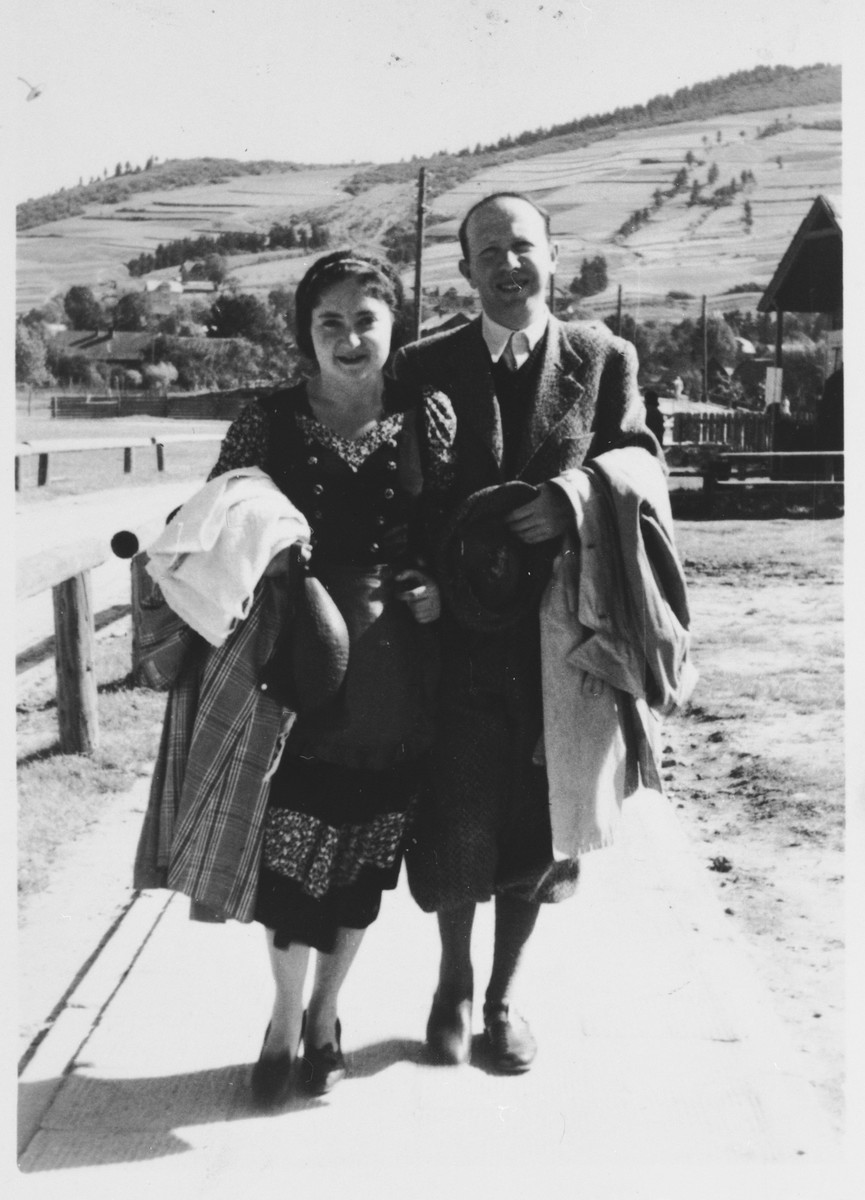 Leon and Dorota Reichman go for a walk on their honeymoon.

Biography
Sophia Richman (born Zofia Leonivna Reichman) is the daughter of Leon Reichman and Dorota (Donia) Weiss. She was born on January 28, 1941 in Lvov Poland where her father worked in banking, and her mother taught piano. Sophia's parents married in a civil ceremony on January 16, 1937 since Leon, though Jewish, was a communist who had denounced religion. When Zofia was only five months old, German forces occupied Lvov in the summer of 1941 and almost immediately conscripted Jewish males between the ages of 14-60 for forced labor. Leon found a job at a garage for military vehicles on Janowska Street. On October 31, 1941 after he reported to work as usual, he discovered that the labor camp was now sealed off and converted into the Janowska concentration camp. A Ukrainian neighbor brought Dorota the news, and she decided to go into hiding with Zofia. Since Dorota spoke a flawless Polish and the baby was blond and blue eyed, she decided to pass as a Christian. She approached a close Catholic friend, Stasia Drabicka, with whom she played duets. Her uncle was a priest who agreed to provide Dorota with the birth, baptismal and marriage certificates of a deceased Catholic parishoner, Maria Oleszkiewicz, born in 1908, only five years after Dorota. He arranged to baptize the baby, Zofia Oleszkiewicz. Once papers were arranged, Dorota looked for a place to live in a small town, but in the vicinity of Lvov so as to be close to Leon. Dorota next sought help from childhood friend, Jerzy Huppert, who had converted to Catholicism and lived in Zimna Woda, a village about 9 miles north of Lvov. Jerzy had a mistress who arranged for Dorota to rent space in her parent's home. The Donikowskis were pleased to rent their upstairs apartment and did not question the story presented to them. Dorota pretended to be a Polish woman of limited financial means whose husband was taken prisoner of war by the Germans. The only other person who knew of their whereabouts and true identity was a former fiance of Dorota. Tadeusz Witwicki was a Polish Catholic son of landed gentry who had met Dorota at the university. He occasionally visited them in their new home providing authenticity to their alibi. Meanwhile, after spending one year in Janowska and witnessing the death of his brother and nephew, Leon decided to try to escape. He was working in the electromechanical workshop and had access to a pair of overalls. These not only covered the yellow patches that marked him as a Jewish prisoner but also helped him pass as a civilian workman once he reached the outside. He decided to escape during lunch hour when the SS would be the least suspicious. The camp bordered a forest on one side and a Christian cemetery on the other. Leon reasoned that no one would expect a prisoner to escape in daylight and seek shelter in an open cemetery. On December 2, 1943, Leon jumped the camp's high fence while the guards were having lunch, and mingled in with a funeral crowd. He went to the home of Stasia's parents who agreed to shelter him for four days. They were able to contact Tadeusz Witwicki who brought them to Dorota and Stasia's hiding place in Zimna Woda. Since Leon looked Jewish, he could not be presented as Dorota's husband; instead he hid in the attic without the knowledge of the owners. In the fall of 1943, Dorota discovered that she was pregnant. She decided to pretend that Tadeusz was the father and that he would marry her after the war. However Mrs. Donikowska forced her to move out of the house. Luckily, another neighbor, Mrs. Bilowa, offered to house her not realizing that Leon would need shelter as well. He surreptiously moved to the attic of the new house. Sophia's sister Joanna was born May 25, 1944. Two months later, the Russians liberated the area, and the Reichmans returned to Lvov without revealing their true identities to anyone in Zimna Woda. Unfortunately Zofia's sister died from whooping cough at the age of one and a half on July 10, 1945. Though Zofia and her parents survived, 35 close relatives perished.