Portrait of Edgar Krasa drawn by Leo Haas in Theresienstadt and given to Krasa's mother as a birthday present. 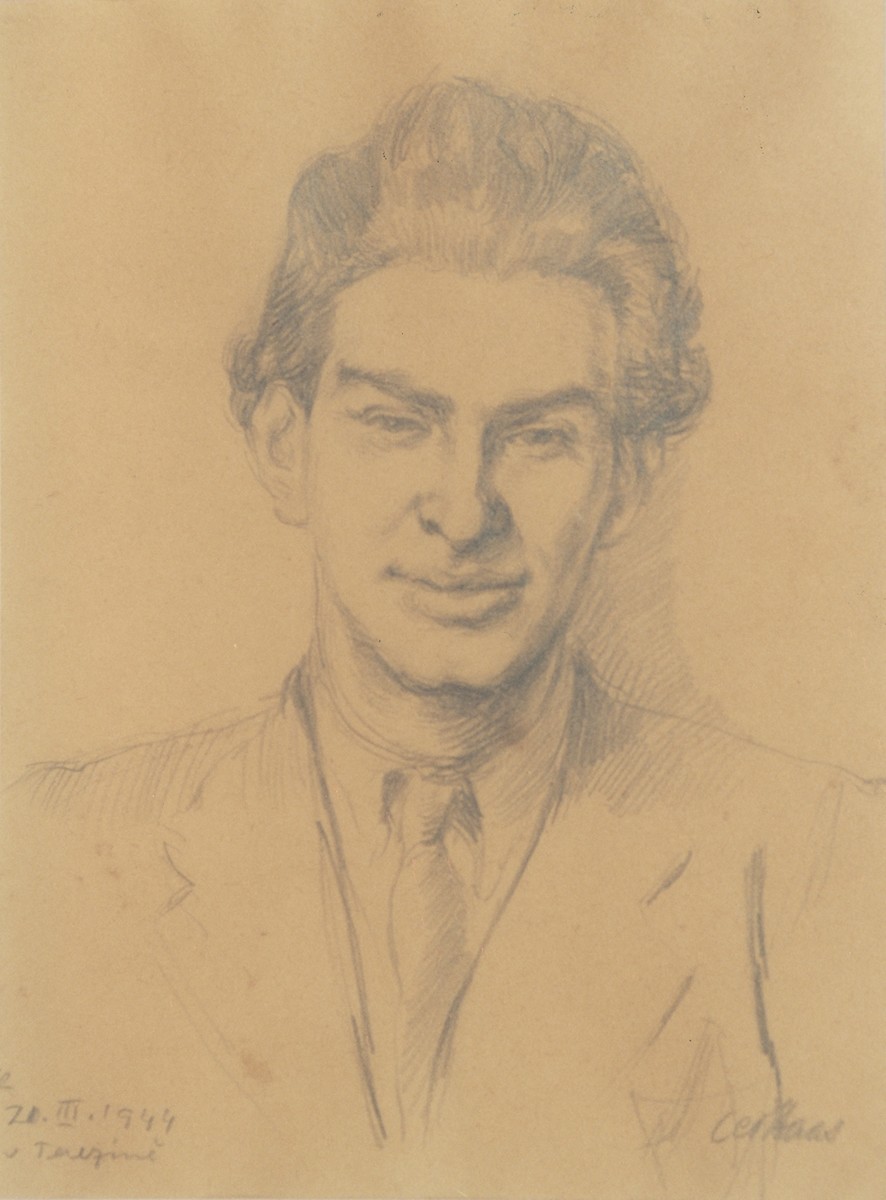 Portrait of Edgar Krasa drawn by Leo Haas in Theresienstadt and given to Krasa's mother as a birthday present.

Biography
Edgar Krasa is the son of Alois and Elsa Krasa. He was born in 1924 in Karlsbad, Czechoslovakia, where his father worked as a salesman. In 1933 his family moved to Prague. In the late 1930s after the institution of anti-Semitic legislation, which interrupted his formal education, Edgar needed to learn a trade. At his aunt's suggestion, he became an apprentice chef, reasoning that with such a trade he would never go hungry. Edgar remained in Prague after the outbreak of World War II. In 1941 after he was dismissed from his job, Edgar went to work as a cook for a refugee shelter for Polish Jews that was run by Karl Schliesser. Later that year, Schliesser was appointed head of the economics section of the newly established Theresienstadt ghetto, and he requested that Edgar join him there to organize the kitchens. In return, Edgar was promised that his parents would be exempt from deportation to the east. (In fact, though Edgar's parents were ultimately sent to Theresienstadt, they were not deported to Auschwitz.) Edgar joined Aufbaukommando (AK1), the initial group of 342 men who came to Theresienstadt on November 24, 1941 to renovate the garrison. (The first deportees arrived six days later.) He assumed responsibility for setting up the two kitchens and training workers to staff them. Edgar designed menus based on the few ingredients available: ersatz coffee, potatoes, flour and a synthetic soup mix. He roomed with Raphael Schaechter, a pianist and choral conductor, who kept up the morale of the other workers by leading them in Czech choral music in the evenings. During his imprisonment in Theresienstadt, Schaechter conducted several operas and numerous performances of Verdi's Requiem. He selected the mass for political reasons, because of its discussion of a final judgment and accounting for sins. Krasa participated in all sixteen performances of the mass, singing bass in the chorus. Krasa also became friendly with several of the artists in the ghetto, including Leo Haas and Fritz Taussig (Fritta), to whom he slipped extra rations in exchange for their drawings. On September 24, 1944 Schleisser was deported to Auschwitz on a transport of 2,500 skilled and able-bodied Jews. Krasa was sent the following week on October 1. From Auschwitz, Krasa was sent to the Gleiwitz labor camp, where he worked as a welder. When the camp was evacuated on January 19, 1945, Krasa was put on a forced march, from which he escaped three days later. He hid in a ditch, and the following day was liberated by Soviet troops. On May 1 Edgar returned to Prague and then proceeded to Theresienstadt, where he was reunited with his parents. Together they went back to Prague, where Edgar met and later married Hana Fuchs, a fellow survivor from Prague. After the establishment of the State of Israel, Edgar served as the chef at the Israeli embassy in Prague for two years. In 1950 he and his wife left Czechoslovakia illegally and immigrated to Israel.

Leo Haas (1901-1983) was a Czech Jewish artist who, while imprisoned in the concentration camps of Nisko and Theresienstadt during World War II, painted portraits and produced a large volume of drawings documenting the daily life of the prisoners. Haas was born to a Jewish family in Opava, Moravia. He was the oldest of four children. From an early age he studied painting. In 1919 he moved to Karlsruhe, Germany, to further his training at the art academy. A few years later he went to Berlin, where he attended the school for decorative arts. There he studied with Emil Orlik, who made him his assistant. Haas was influenced by German Expressionism and was inspired by such artists of the past as Goya and Toulouse-Lautrec. In 1923 he made an extended tour of France. The following year he struck out on his own as a caricaturist for the working class press in Vienna. Haas returned to Opava in 1926, where he worked as a painter, graphic artist, book illustrator and set designer. In 1929 he married Sophie Hermann and soon became a respected portrait painter in Opava. He belonged to both the Moravian-Czech and German artists' associations and worked on behalf of Czech-German artistic cooperation. When the National Socialist party came to power in 1935, Haas abandoned his activity in the associations and assumed a position as the director of a small printing establishment. In 1937 Haas' work was deemed to be "degenerate art," and he was denounced as a "cultural Bolshevik" and "spoiler of German-Silesian art." After the Kristallnacht pogrom of November 9-10, 1938, Haas and his wife went to live with her parents in Ostrava. In October 1939, seven months after the occupation of Bohemia and Moravia by the Nazis, Haas was arrested by the Gestapo for aiding illegal border crossings by German communists. He was deported to Nisko (near Lublin) together with thousands of Jewish men, where he was put to work as a wagon driver bringing food and construction materials from Lublin. While in Nisko, Haas painted portraits of SS men, for which he obtained extra food and art supplies. During this period he also made numerous drawings of camp life, more than a hundred of which have survived. When the camp was closed, Haas returned to Ostrava. Soon after, he separated from his wife who wanted to flee the region. Haas refused to leave his father and sister, and so remained in Ostrava, where he was assigned to forced labor fixing sewers. During this period he met Erna Davidovitc, who would later become his second wife. Haas was arrested by the Gestapo in August 1942 for his involvement in smuggling activities. Though the Jewish community was soon able to secure his release from the local prison, he was earmarked for the next transport to Theresienstadt, which left at the end of September. Haas and his extended family arrived in the camp on October 1. With the help of Jacob Edelstein, the chairman of the Jewish council in Theresienstadt, Haas secured a position in the technical-graphics department, where he worked with other artists such as Otto Ungar, Ferdinand Bloch and Bedrich Fritta. His job afforded him the opportunity to visit various parts of the camp and observe many aspects of daily life, which he documented in his drawings. Among the subjects he depicted were the search for food, transports, moves within the camp, and the elderly, sick and dying. Haas, Fritta and Ungar would often meet in the evenings to work on their drawings. Some of their artwork was smuggled out of the camp by the former art dealer Leo Strauss, while the remainder was hidden in various places. A few days before the June 1944 visit of the Red Cross to Theresienstadt, Haas and his fellow artists were arrested in the so-called Painters Affair. They were interrogated by Adolf Eichmann himself, who was investigating the effort to smuggle artwork out of the camp. When none of the artists broke their silence, they were sent to the Gestapo prison in the Small Fortress of Theresienstadt together with their families. During his three and a half months in the Small Fortress, Haas was assigned hard labor constructing railroad lines. In October 1944, after being accused of distributing atrocity propaganda abroad, Haas was deported to Auschwitz together with Fritta. They arrived on October 28 and Haas was assigned prisoner number 199885. Fritta immediately took sick and died a week later. For the next three weeks Haas worked in Block 24, where he produced sketches for Nazi physician Josef Mengele. Subsequently, he was transferred to Sachsenhausen, where he was detailed to the counterfeiting unit. Haas was assigned to the group producing counterfeit American currency. At the end of February Haas and his group were transferred to Mauthausen by way of Dresden and Prague. In April Haas was evacuated to Redl-Zipf and Schlier, and from there, to Ebensee on May 5. He was liberated by the Americans in Ebensee shortly after his arrival. When he was allowed to leave, Haas returned to Theresienstadt, where he found his entire art collection, as well as many works by Fritta, in the Magdeburg barracks. He was soon reunited with his wife Erna, who had also survived but was in very poor health. The couple adopted the orphaned son of Bedrich Fritta and settled in Prague. Following Erna's death in 1955, Haas moved to East Berlin, where he worked as the editor of a caricature journal called Eulenspiegel and designed movie sets for the DEFA Company and for East German television. He exhibited widely, and many of his postwar artwork reflected his camp experience. Haas donated his wartime oeuvre to the Terezin Memorial and the State Jewish Museum in Prague.