Members of the Rubin family, the family of the donor's mother, on vacation near Lodz. 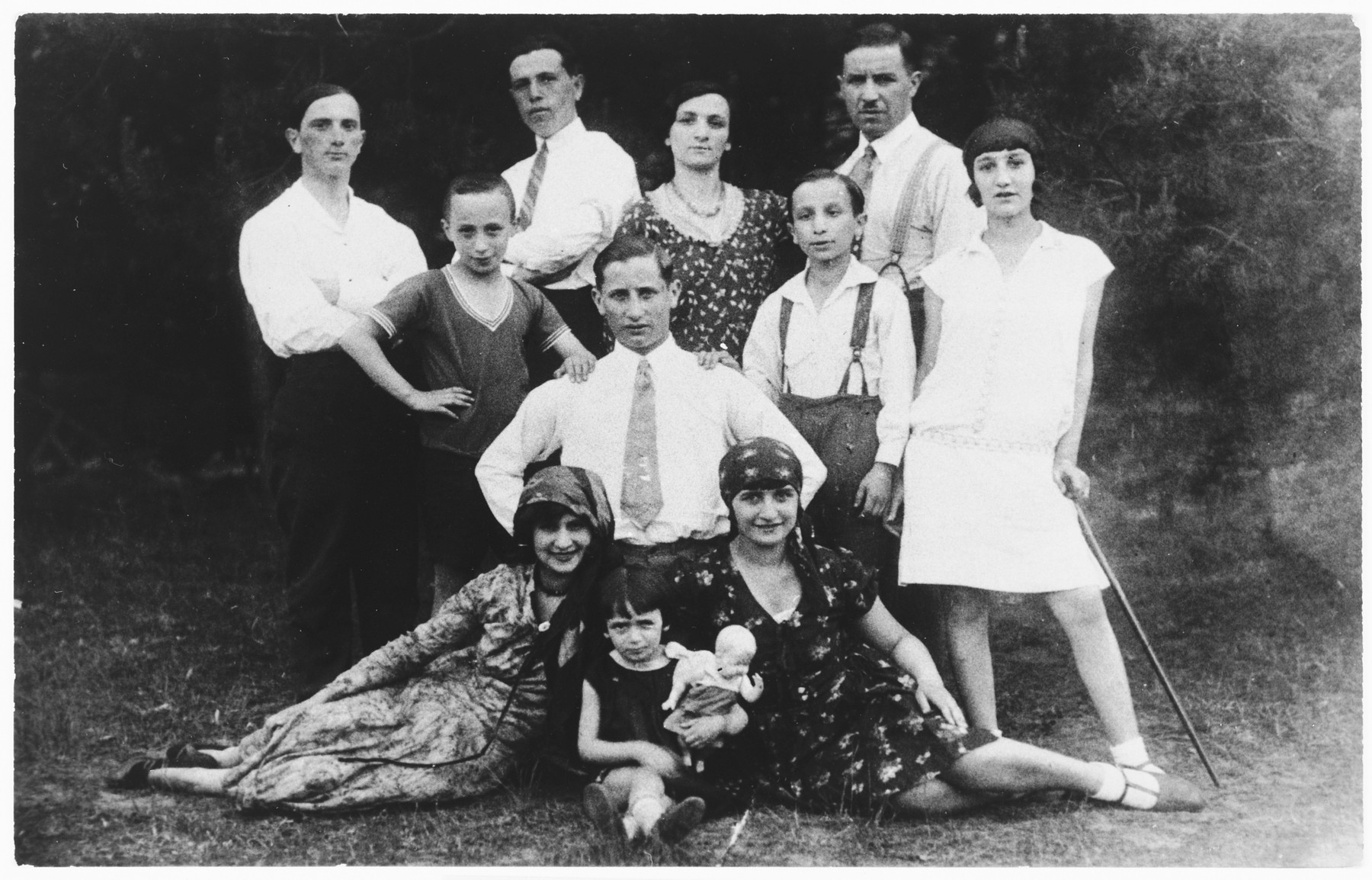 Members of the Rubin family, the family of the donor's mother, on vacation near Lodz.

Miriam is seated on the left. Heniek (Chaim, Tola's younger brother) is kneeling in the center. Genia (Gold) is standing on the right. In the back row are Avraham (Tola's older brother, right), his wife Pola and two sons.

Biography
Salutka Lewinsky (now Stella Yollin) was born in Lodz on March 15, 1931 to Samuel Lewinsky (b. 1906) and Tola Rubin Lewinsky (b.1908). Samuel was an accountant by training, and owned a small department store in the town on Tzcew near Danzig. He met Tola on a train when he witnessed antisemites harassing her and intervened to protect her. Salutka had two siblings: Max, born either in 1929 or 1930, and Roman, born in 1932. The family was religiously observant. However, the boys attended the Tachemoni schools and a modern, Hebrew school, and Salutka attended a Polish public school. In 1936 the family left Tzcew, fearing Germany planned to annex the area, and returned to Lodz. Samuel then became a partner in his father-in-law's factory in Pabianice and also served as an officer in the Polish air force. After the outbreak of World War II, Samuel was captured by the Germans and became a POW. He was released at a later date and managed to find the rest of the family who were by then living in the Lodz ghetto. Salutka's mother had left a note for him with the concierge of their building, saying they had moved to the ghetto. In the ghetto the family lived in one room, and Samuel worked as a gardener outside the ghetto. Tola's oldest brother, Abraham, who had been very wealthy before the war and had even attended 1939 World's Fair in the United States, lived with them. In 1944 the family was deported to Auschwitz. Upon arrival, the men and women were separated; Salutka never saw her brothers and father again. Salutka and her mother were also separated but miraculously found each other in Birkenau. Somehow Tola persuaded a sympathetic German officer to allow them to work together. In the late fall of 1944, Salutka and her mother were sent to Bergen Belsen. They went to work at a camp entitled Hambiren where her mother was sent to the salt mines, and Salutka worked in the SS garden with four other girls. They remained there until January 1945. In the mornings they received a slice of bread, and in the evening Salutka helped distribute soup to the workers returning from the mines. Towards the end of the war, the women were transferred back to Belsen where both Salutka and Tola got typhus. The British army liberated them on April 15, 1945. Salutka had recovered, but Tola was still extremely sick and quite emaciated. A Romani woman helped Salutka cook oatmeal to feed her mother and slowly bring her back to life. Salutka and her Tola remained in the Bergen Belsen displaced persons' camp until 1947 when they immigrated to Palestine. Of a family of 43 people, only Salutka and her mother survived.