One of the young survivors of Buchenwald writes in German "Where are our parents?" on the side of a train prior to the departure of the children's transport from Buchenwald for France. 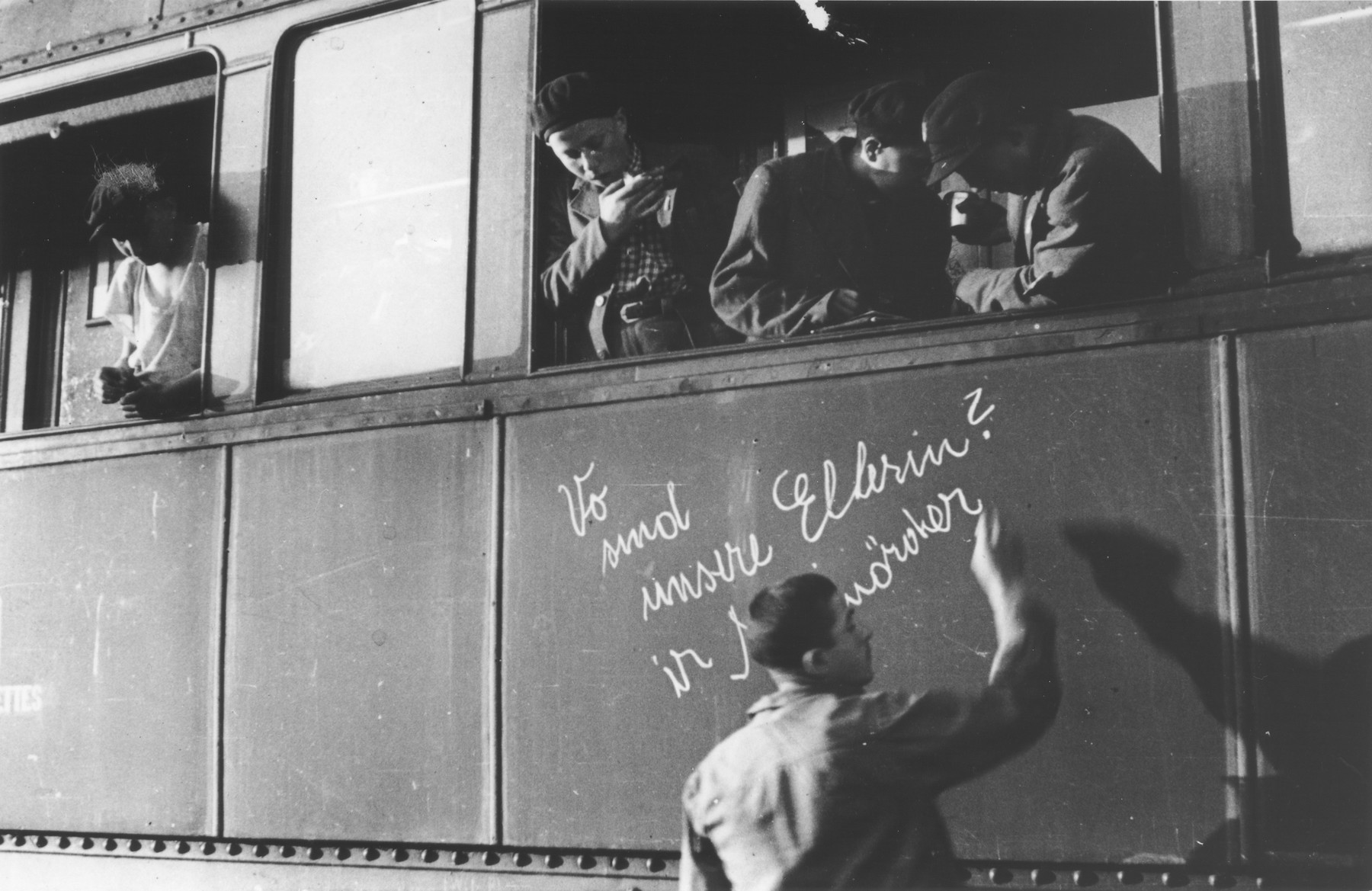 One of the young survivors of Buchenwald writes in German "Where are our parents?" on the side of a train prior to the departure of the children's transport from Buchenwald for France.

The boy writing on the side of the train is Joe Dziubak from Lodz.

[Sources: Hemmendinger, Judith and Krell, Robert. "The Children of Buchenwald." Gefen Publishers, 2000; Grobman, Alex. "Rekindling the Flame." Wayne State University Press, 1993; Hazan, Katy, "Chronologie de l'histoire de l'OSE L'action de l'OSE apres la guerre."
Biography
Joe Dziubak was born either September 6, 1925 (or August 14, 1929). He had three older sisters and two older brothers. His father died before the war, when he was 11 or 12. In 1940 the Dziubak's were sent to the Lodz ghetto, where Joe worked in a saddle-making workshop. At the end of June, 1944, he and his family were deported to Auschwitz-Birkenau. At Birkenau he became separated from his mother and he joined a group of 100 boys in a special barracks in Auschwitz I (bldg 27, room 9). They were then parceled out to work on five different farms in groups of 20. He worked on a farm at Auschwitz for six months. Late in January, 1945, he was marched to Gleiwice and then put on train to Buchenwald, where he arrived at the end of January 1945. By then, all of his family had disappeared. At Buchenwald, Dziubak was placed in bloc 66 in the little camp. The only work he was assigned was to go out in groups to clean up after bombings. On April 10, 1945, while waiting for a work assignment, a reconnaissance plane appeared overhead. The guards became scared and ran away, and the prisoners were liberated the following day. After liberation, the boys were placed in the SS buildings outside the barbed wire, which were in poor shape. In early June 1945 Joe joined a transport of 420 boys who were sent to Ecquis, France. Two years later he was able immigrate to the United States under the sponsorship of relatives in Chattanooga, TN.