Toto (Otto Giniewski, later Etan Guinat), a Zionist activist and leader of the Armée Juive, works at his laboratory at the University of Grenoble. 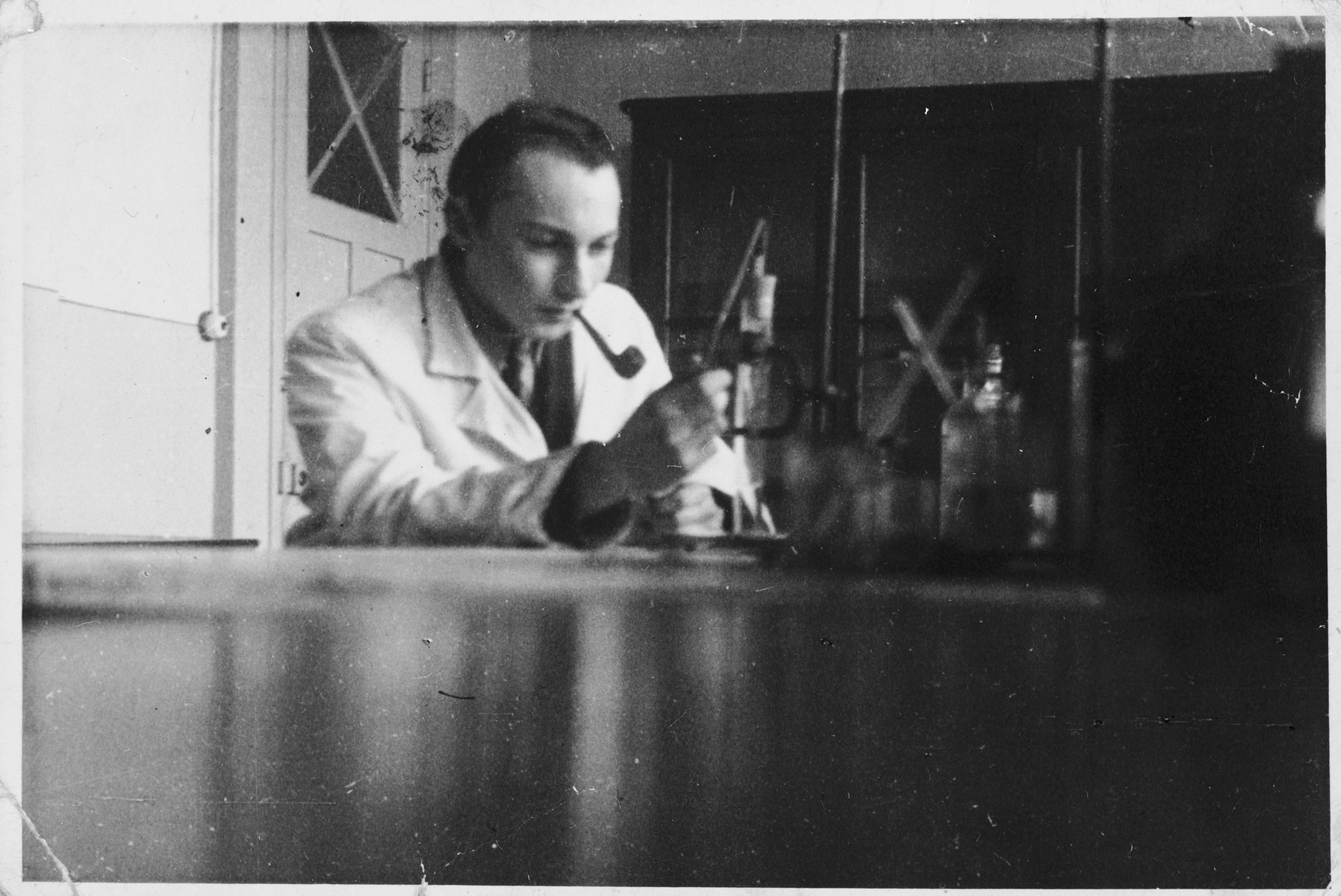 Toto (Otto Giniewski, later Etan Guinat), a Zionist activist and leader of the Armée Juive, works at his laboratory at the University of Grenoble.

His laboratory served as his headquarters where he could hide illegal items such as blank cards,stamps etc. needed for the underground and also receive messengers from all parts of France. The photo was taken by Jacques Dubois, a student who shared his office.

Otto Giniewski (now Eytan Guinat) is the son of Josef and Sarah (Kessler) Giniewski. He was born February 14, 1920 in Vienna, Austria. As a youngster, Otto was active in the Maccabi Hatzair Zionist youth movement. The increasing influence of the Nazi party led the Giniewski family to leave Austria for Belgium in July 1935. Otto continued his education in Brussels and became active in Zionist politics. He was elected president of the Zionist student organization JEW (Jeunesse Estudiantine Sionist) in 1938, after beginning a course of study in chemistry and physics at the University of Brussels. The following year he proposed to the British an electomechanical system to improve the stability of warships when firing canons (which was finally tested in 1942). After the German invasion of Belgium in May 1940, Otto was sent to southern France as an enemy alien and confined in the Saint Cyprien internment camp. He was released in July 1942 and resumed his academic studies at Montpellier University. There, he founded a new Zionist group called the Gdoud de Montpellier, which organized political activities to combat the anti-Jewish policies of the Vichy government. In May 1942, he started the Montpellier branch of the MJS (Mouvement de la Jeunesse Sioniste or Zionist Youth Movement), uniting all French Zionist youth organizations under the leadership of Simon Levitte and Joseph Fischer. After moving to Grenoble (in the Italian zone) to pursue a Ph.D. at the university, Otto set up the Gdoud de Grenoble, which became an important center of Zionist activity and rescue operations during the war. Otto's chemistry lab at the university became a secret headquarters for a variety of underground activities, including the forging of identification papers and the location of hiding places for Jews. In January 1944, the Gestapo came looking for Otto at the University. Fortunately, he was able to escape and remove evidence of his illegal activities. At this time, Otto turned over the rescue operations of the Gdoud to Georges Schneck and prepared to flee to Caussade (near Toulouse). While en route, his wife Lili gave birth to a baby girl, Judith. In November 1944, Otto received his Ph.D. in chemistry from Montpellier University. In March 1945 he was elected secretary general of the MJS at a convention in Paris. However, he soon resigned his position due to political differences with representatives of the movement in Palestine. In July 1945 Otto and his family immigrated to Palestine, where two years later he joined the faculty of the chemistry department at the Hebrew University. The following year Otto was mobilized for the science unit of the new Israeli Defense Forces.