Cypora Cypa Jablon Zonszajn crouches down next to her daughter, Rachel Zonszajn, in the Siedlce ghetto. 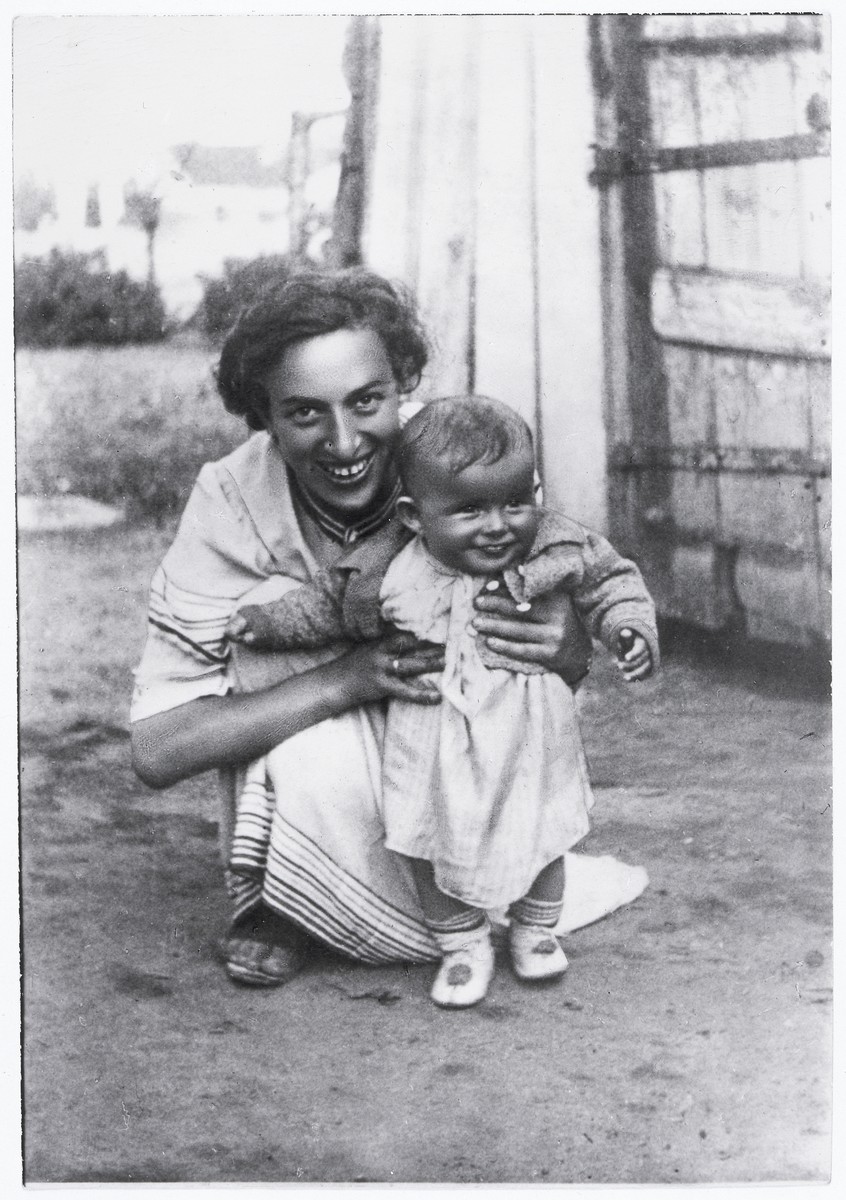 Cypora Cypa Jablon Zonszajn crouches down next to her daughter, Rachel Zonszajn, in the Siedlce ghetto.

Biography
Zofia Glazer (born Zofia Olszakowska) and Irena Zawadzka were Polish school friends of Cypora (Jablon) Zonszajn in Siedlce, Poland. Cypora was born in 1915 and raised in Siedlce, Poland, where she attended a Polish high school. Upon graduating from high school Cypora attended the Institute of Agriculture in Warsaw in preparation for joining her older brother, Szymon Jablon, in Palestine. Her plans did not come to fruition. Cypora married Jakub Zonszajn, who earned a living as a typesetter. During the German occupation they were compelled to live in the Siedlce ghetto, where Cypora gave birth to Rachel, on October 1, 1941. In August 1942 the Siedlce ghetto was liquidated and Cypora, with her husband and daughter, was transferred to the so-called small ghetto. Jakub, who served as a Jewish policeman in the Siedlce ghetto, was able to hide his wife during the liquidation. In October 1942 Cypora fled the ghetto taking one-year-old Rachel and a friend, Dorota Monczyk, with her. They found refuge with the Zawadzki family, the family of her high school friend. Zofia Olszakowska took Cypora to another hiding place, but Cypora decided to return to the ghetto to join her husband. Sometime in the fall of 1942 she wrote an account of the liquidation of the Siedlce ghetto. She placed this notebook with the Zawadzki family, who was hiding her daughter. In addition, she wrote a letter to Mrs. Sabina Zawadzka in which she entrusted her beloved daughter to her. The Zawadzki household consisted of Mrs. Sabina Zawadzka, her daughter Irena, her son, Kazimierz and his wife, Krystyna. Rachel's name was changed to Maria Jozefa and she lived there quite openly. After two months Irena decided to obtain "legitimate" identity papers for Rachel and arranged that the local convent would take her in. Irena visited Rachel in the convent and when the little girl got sick, she took her back home. In January 1943, the so-called small ghetto was liquidated. The remaining Jews of Siedlce were forced to walk to Gesi Borek and wait there for a train to deport them to Treblinka. According to witnesses Cypora took a poison pill and died before the deportation, but her husband, Jakub, was murdered in Treblinka. Rachel Zonszajn remained with the Zawadzki family until the summer 1943. At that time the fear of discovery grew as the Zawadzki family lived in close proximity to Gestapo headquarters in Siedlce. Zofia Olszakowska took Rachel to the village of Zakrzówek near Lublin and placed her with her sister, Irena (Olszakowska) Egerszdorff. She also arranged for a legitimate birth certificate in the name of Maria Tyminska. Rachel remained in Zakrzówek for six months. In the early winter of 1944 Zofia took Rachel to Sobieszyn, near Pulawy. The Soviet army liberated the area in July 1944, but Zofia and Rachel stayed there until June 1945. They returned to Siedlce, and Rachel went back to live with Irena Zawadzka. The local Jewish committee asked to take over the care of Rachel, but Zofia decided to contact Szymon Jablon, Rachel's maternal uncle, who lived in Palestine. Szymon requested that Rachel, who was four years old at that time, be transferred to a Jewish orphanage in Warsaw. The plan was to bring Rachel to Palestine to be reunited with her uncle as soon as possible. In the fall of 1945 Zofia took Rachel to Warsaw and entrusted her to a Jewish organization, which was in charge of transferring Jewish children to Palestine. Soon after the children were transferred to France. However, it took another two years until Rachel reached Palestine. Irena, who was studying in France in 1947, went to visit Rachel in the children's home and found a very sad little girl, who forgot all her Polish. Rachel reached Palestine in late 1947 and lived for a year with her uncle, Szymon. Later she was placed in a boarding school near Naharyia and in 1953 Rachel was placed in Kibbutz Ma'abarot, according to her mother's wishes. Zofia and Irena stayed in constant contact with Rachel through her uncle. In 1966 Szymon Jablon invited both rescuers to Israel. The diary, which Cypora entrusted to Irena Zawadzka, was deposited by the two women in the Polish Main Crimes Commission. A few years later, when Rachel requested the notebook, they withdrew it and sent it to her. Unfortunately, a few pages from the diary are missing. Irena Zawadzka removed them during an attack of mental instability, when she feared the return of the Germans. She also destroyed the letter written by Cypora Zonszajn to her mother Sabina Zawadzka. In 1988 Yad Vashem honored Zofia Glazer, Irena Zawadzka and her mother, Sabina Zawadzka, as Righteous Among the Nations. Rachel Zonszajn married in 1960 and has two sons. Rachel Ben Shaul currently resides in New York.