Invitation to a children's ball written in color pencil. 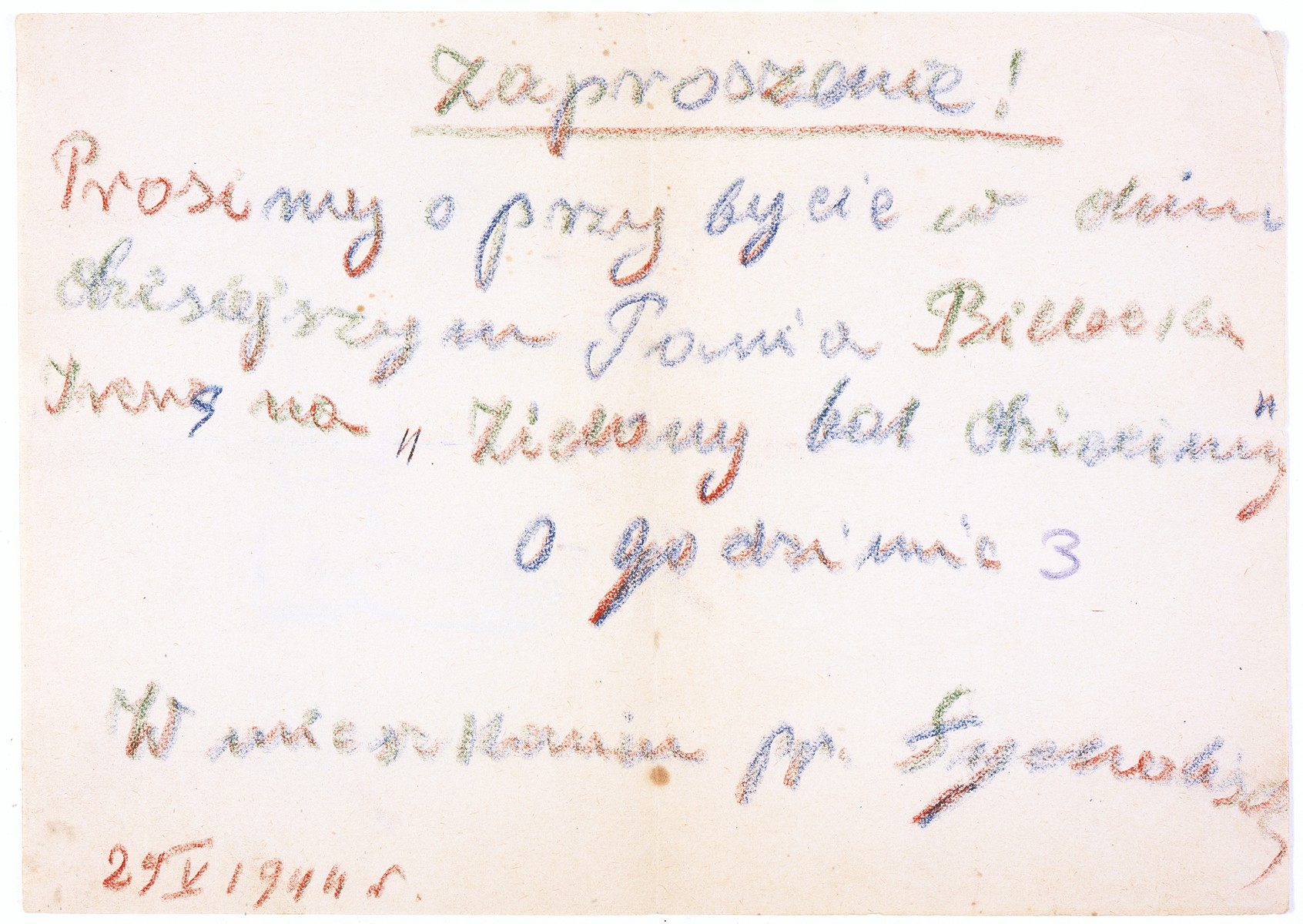 Invitation to a children's ball written in color pencil.

The ball was organized by Irena Schwarz, a Jewish child living in hiding in Skarzysko Kamienna, Poland. It took place at the apartment of her rescuere, Janina Sycz.

Biography
Irena Schwarz is the only daughter of Michael and Yetta (Hochweiss) Schwarz. She was born April 18, 1931 in Lvov, Poland, where her father was a prominent lawyer. During the Soviet occupation of eastern Poland, Irena's parents worked as laborers. After the German invasion of the USSR the Schwarz family was forced into the Lvov ghetto. During one of the ghetto actions Irena and her father hid in a drainage pipe, but her mother refused. Michael asked a friend, a Polish artist, to help hide his 10-year-old daughter. The friend then asked his next-door neighbor, Janina Sycz, if she would agree to shelter the Jewish child. Janina came to the ghetto and spoke to Dr. Schwarz. She promised him that after the war she would send Irena to her relatives in the U.S. She then left the ghetto with Irena. Janina had three children of her own: Wlodek, Andrzej and Irena (Irka), who treated Irena as a sibling. To avoid confusion between two Irenas, Janina called Irena Schwarz, Relcia. Soon after Irena joined the family, the Sycz' left Lvov for Skarzysko Kamienna, to be close to Janina's parents. Irena-Relcia was introduced as an orphaned relative. Janina was a teacher by training, but during the war she worked as a laborer. The family attended church regularly, and in 1944 Irena expressed the desire to convert to Catholicism. Janina convinced her to wait until she was eighteen to make the decision. Immediately after the liberation Janina contacted Irena's relatives in the U.S., and in 1946 Irena left her foster family and traveled to New York via Sweden. She was greeted by her maternal grandmother, aunt and uncle. Irena maintained contact with her rescuer through the years. Her own life was marked by loneliness and depression. She attended the University of Michigan and later graduated from Adelphi College. After her marriage ended in divorce she plunged into a deep depression. In December 1967 Irena's aunt Sabina took her on a trip to Israel, and in 1974 the two women moved there permanently. A few years later, Irena invited Irka Sycz, the daughter of her rescuer, to visit her in Israel. During this visit they applied to Yad Vashem to recognize Janina Sycz as one of the Righteous Among the Nations. At that time Irena invited Andrzej Sycz, her former foster brother, to visit her as well. Andrzej had earned a PhD in physics and astronomy and worked at a university in Poland. He arrived in Israel soon after his own marriage had dissolved, and he and Irena fell in love. Andrzej subsequently moved to Israel and the two were married. He took up a new career as a painter, while Irena taught English. Yad Vashem recognized Wlodek, Andrzej and Irka Sycz as Righteous Among the Nations in 1987. Andrzej died in 1995 and Irena continues to live in Netanya. She wrote a memoir about her experiences entitled "A Holocaust Love Story" (2000).