A group of mothers pose together in a park with their young children. 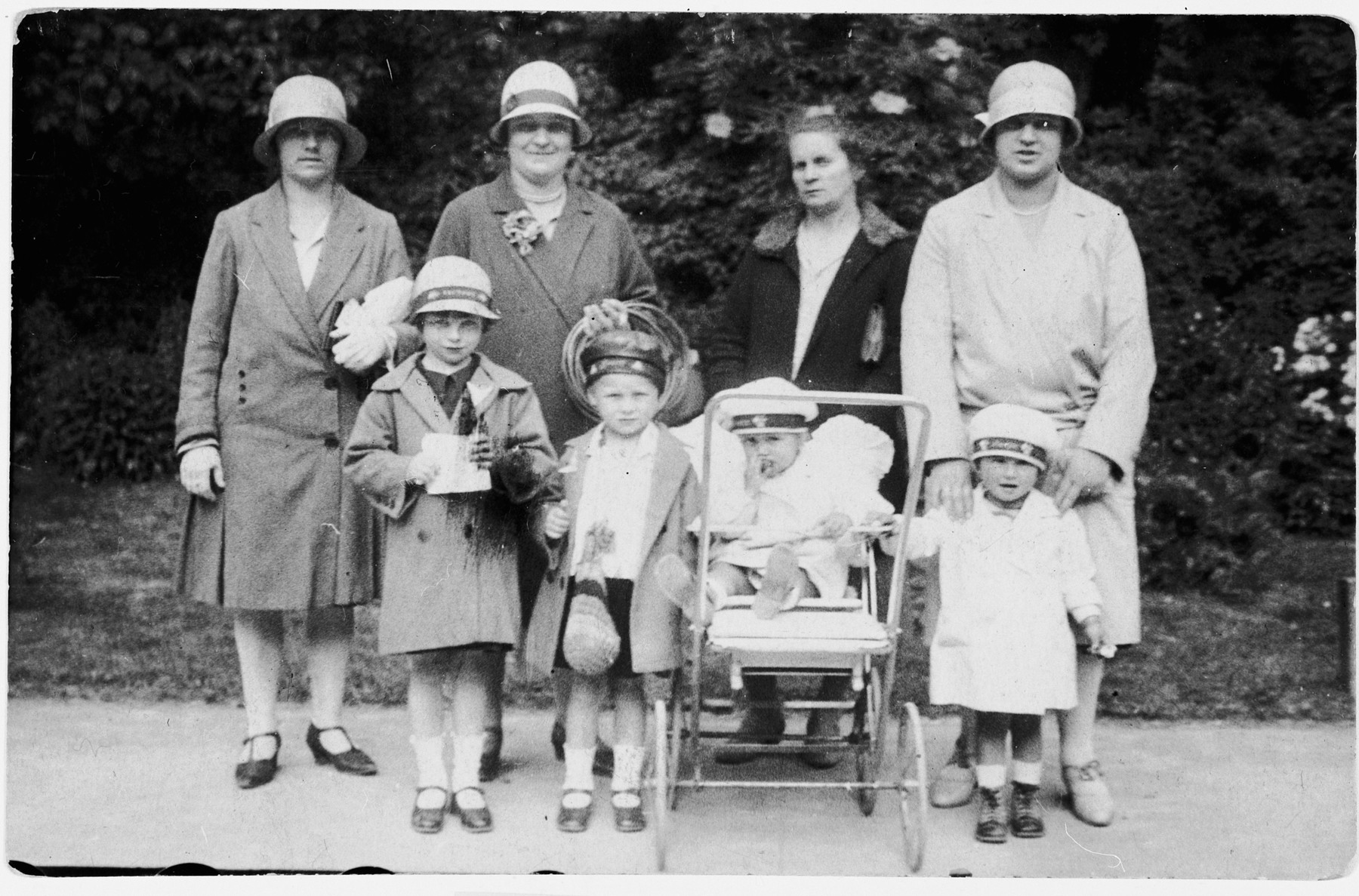 A group of mothers pose together in a park with their young children.

Pirsoka Rosenberger is on the far left with her hands on the shoulders of her daughter Judith. Next to her is her nanny Marcelle pushing her younger daughter Olga in her stroller.

Biography
Olga Horak (born Olga Rosenberger) is the daughter of Hugo Rosenberger (b. April 13, 1894) and Piroska Weiss Rosenberger (b. February 12, 1905). She was born on August 11, 1926 in Bratislava, Czechoslovakia where her father worked as an agronomist. Olga had one sister, Judith, who was one year older. The girls attended the Jewish primary school in Bratislava and a German high school. Prior to 1938 the family experienced almost no antisemitism and were well integrated into the general Slovak community. In 1942 Judith was deported to Auschwitz. Afterwards, the rest of the family fled to Hungary and lived in hiding for the next two years. Following the German takeover of Hungary in March 1944, the Rosenbergers decided it would be safer to be in the familiarity of their hometown and they smuggled themselves back into Bratislava. They lived openly in relative safety until the suppression of the Slovak uprising of August 1944, which the Germans used as an excuse to occupy the country. The family hid with neighbors for about two weeks before being denounced. They were told that they had to join other foreign nationals in Marianka, a small town outside of Bratislava. A few weeks later, Hlinka guards rounded up all the Jews in Marianka and shipped them to Sered and from there to Auschwitz. Hugo perished in Auschwitz, but Olga and her mother were kept there only a short while before being sent on to Kurzbach where they were put to work digging trenches for the German army. From there they were taken on a death march to Gross Rosen and Dresden. In Dresden they boarded open carriages that brought them to Bergen-Belsen in January 1945. Olga remained with her mother until their liberation, April 15, 1945, but sadly, Piroska died from typhus and exhaustion the following day. Olga was also very sick. She weighed only 29kg at liberation and spent the next months recovering in hospitals in Bergen-Belsen, Celle and Pilsen. Her hospital roommate in Pilsen befriended her and continued to nurse her back to health in her own home until Olga was well enough to return to Bratislava in October 1945. It took an additional two years for Olga to fully regain her health. As none of her immediate family survived, she lived with distant relatives who cared for her. In 1946, Olga met John Horak, a Slovak Jew who had survived in hiding. They married in Bratislava on February 9, 1947 and immigrated to Australia in 1949.