Portrait of the Juhn family, a Jewish family in Zagreb, Croatia. 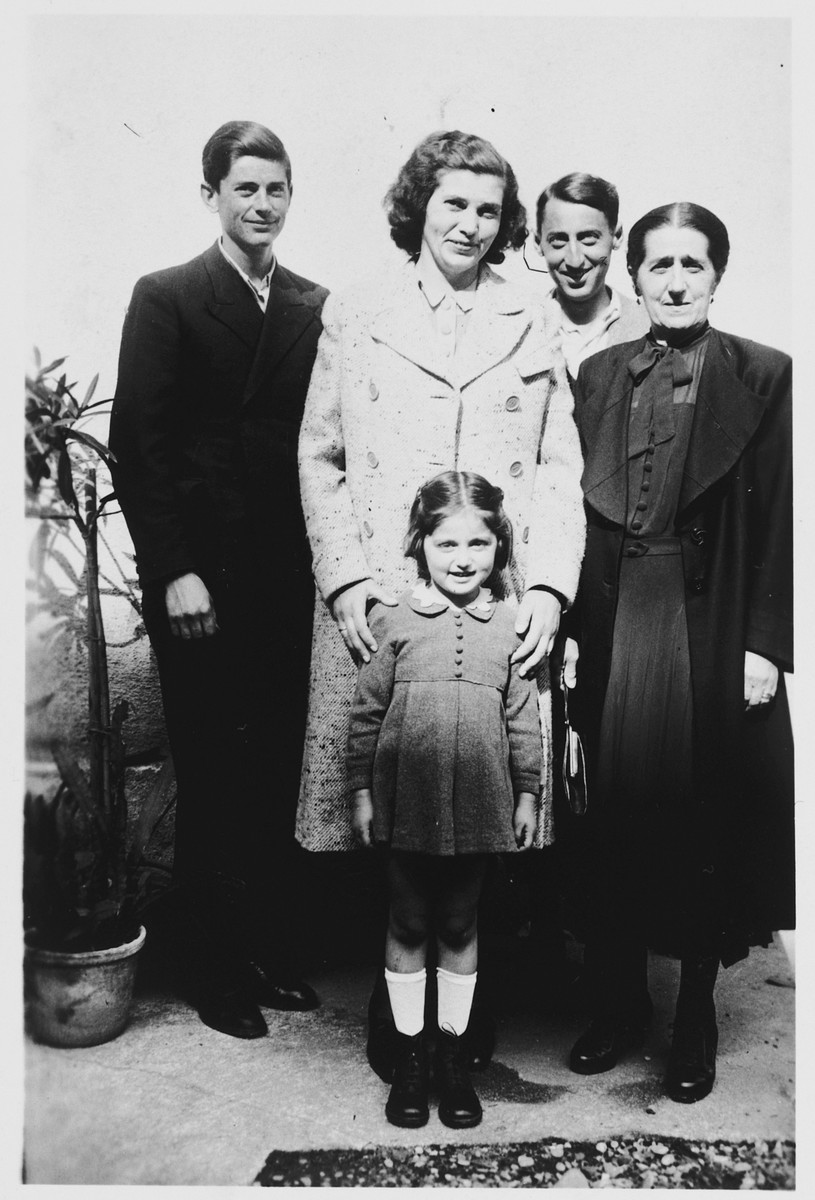 Portrait of the Juhn family, a Jewish family in Zagreb, Croatia.

Biography
Branka Sondheim (born Branka Juhn) is the daughter of Guido Juhn and Henrietta (Hass) Juhn (later Mayer). She was born December 9, 1936 in Zagreb, Croatia, where her father was employed in the office of what was probably the Fox Movietone News company, and her mother worked as a bookkeeper. Branka has one stepbrother, Marcel Mayer (b. 1947). In August 1941, four months after the establishment of the Independent State of Croatia and two months after the beginning of the mass arrests of Croatian Jews, Branka's father and two uncles, Benko and Marcel Juhn, were deported to the Jasenovac concentration camp. The family later heard rumors that Guido had contracted tuberculosis and died in Jasenovac in January 1942. The following June, Henrietta's parents were evicted from their apartment in Zagreb and moved in with their daughter. A few weeks later, when Henrietta's home was also confiscated, they all moved in with Guido's parents. Then Henrietta's friend, Elsa Hirsl, who was also a widow with a young daughter, invited Henrietta and Branka to come live in her apartment on the edge of town. Henrietta readily accepted.

While living with Elsa, Henrietta helped out in her small grocery store. Among their customers were two young German officers who befriended the two women because they spoke fluent German. On August 6 Henrietta heard a rumor that the Ustasa militia was planning a raid on the neighborhood where her in-laws lived. She rushed to their apartment and pleaded with her parents and in-laws to move out for a few nights. While Henrietta's parents agreed to move to the home of non-Jewish friends, her in-laws were too despondent over the loss of their sons to leave. When nothing happened for the next two nights, Henrietta's parents moved back. The following night (August 9) however, the raid took place, and Henrietta's in-laws and her mother were taken away. Her father survived because he chose to sleep in the attic, but he had been unable to convince his wife to join him. After hearing the news, Henrietta contacted her father who urged her to flee. He thought that he might be able to escape on his own to Hungary. That same day Elsa was informed that her store was about to be Aryanized, and the two friends decided to flee to Elsa's parents' home in a nearby small agricultural village. The two German officers, who had sensed their predicament, offered to help them escape. They were in charge of driving transports of Serbian forced laborers from the Krajina district of Croatia to a forced labor collection center in Vienna, from where they were sent to factories throughout Germany and Austria. The officers, one of whom was named Erich, thought they could arrange labor contracts for the two women, but Henrietta and Elsa declined their offer when it became clear they would have to be separated from their daughters. Erich gave Henrietta an address where she could reach him in case she changed her mind. After spending a week with Branka on a farm owned by friends of Elsa's parents, Henrietta decided she must return to Zagreb and pursue a plan of escape. She contacted Erich, who in the meantime had found a labor contract for a mother and child whose ages matched those of Henrietta and Branka. On the evening of August 31, Henrietta and Branka assumed the identity of Stoja and Branka Obradovic, and Eric drove them over the Austrian border. After spending a night with friends of Erich near the border, Henrietta and Branka took a train to Vienna.

Erich had planned that after they reached Vienna, Henrietta would accept whatever assignment she was given, which would probably be in Germany. However, Henrietta, who had spent many vacations visiting relatives in Vienna, was determined to remain in the Austrian capital. Fortunately, when she reported for assignment with her false labor contract, the commander realized that she spoke German and assigned her to serve as the interpreter for the camp doctor who was unable to communicate with his Serbian patients. Henrietta and Branka lived for a few weeks at the camp before receiving permission to rent a room in the city and commute to the camp. At first they rented a room in the home of a fanatically Nazi seamstress named Frau Brueckner, but after her sudden death in 1943, Henrietta and Branka were taken in by the Schoepf family who lived in the same building. The Schoepfs, who were opponents of Hitler, treated them with great kindness and allowed them to remain for the duration of the war. After working for the camp doctor, Henrietta was transferred to the central administrative office for foreign labor in downtown Vienna. There she met Josef Anton Mayer, a German who had grown up in Vienna but had been victimized by the Nazi regime. He was now serving as a labor camp administrator and had to report weekly to the Gestapo. Six months into their relationship, Josef found out that Henrietta was Jewish. He remained the only person to whom she revealed her true identity during the war. Even Branka was not told of her origins and the true reason for their flight from Croatia until two days after their liberation. In 1943, when she was old enough to start school, Josef had to vouch for her Aryan status in the absence of valid papers so that she could be admitted. Branka attended the Catholic religious classes provided by the school and received her First Communion along with her classmates.

The war ended in Vienna on May 5, 1945. Soon afterwards Henrietta was faced with the choice of immediate repatriation to Croatia or marrying Josef and assuming his stateless status. The couple decided to marry and found a sympathetic priest who was willing to officiate without official documentation of her true status (which Henrietta was waiting to receive from Zagreb). Two months after her marriage, Henrietta was shocked to receive a letter from her father, who had just returned to Zagreb. A week after he had last seen Henrietta, Adolf Hass had escaped to Hungary using false identification papers. He lived in Budapest for one year until he was caught by the police, and was subsequently deported to Dachau and later to Buchenwald. Shortly before the liberation he escaped from Buchenwald and walked eastward. He had reached the border between Hungary and Yugoslavia by war's end, and collapsed there from exhaustion. He awoke in a hospital in the border town of Subotica. After five weeks of recuperation he took a train to Zagreb, where he found shelter with one of Henrietta's old friends. Henrietta desperately wanted to go to her father, but difficulties in securing travel documents coupled with a new pregnancy made it impossible for her to travel to Zagreb until September 1947. When she finally arrived with Branka and her baby Marcel, they had a wonderful reunion. This turned out to be their last meeting. Adolf immigrated to Palestine in March 1948 to be with his son Willy (who had settled there in the 1930s), while Henrietta and her family moved to the US in November 1949. Adolf died in January 1950 before his daughter had the chance to visit him again. Henrietta passed away in California in 1998.