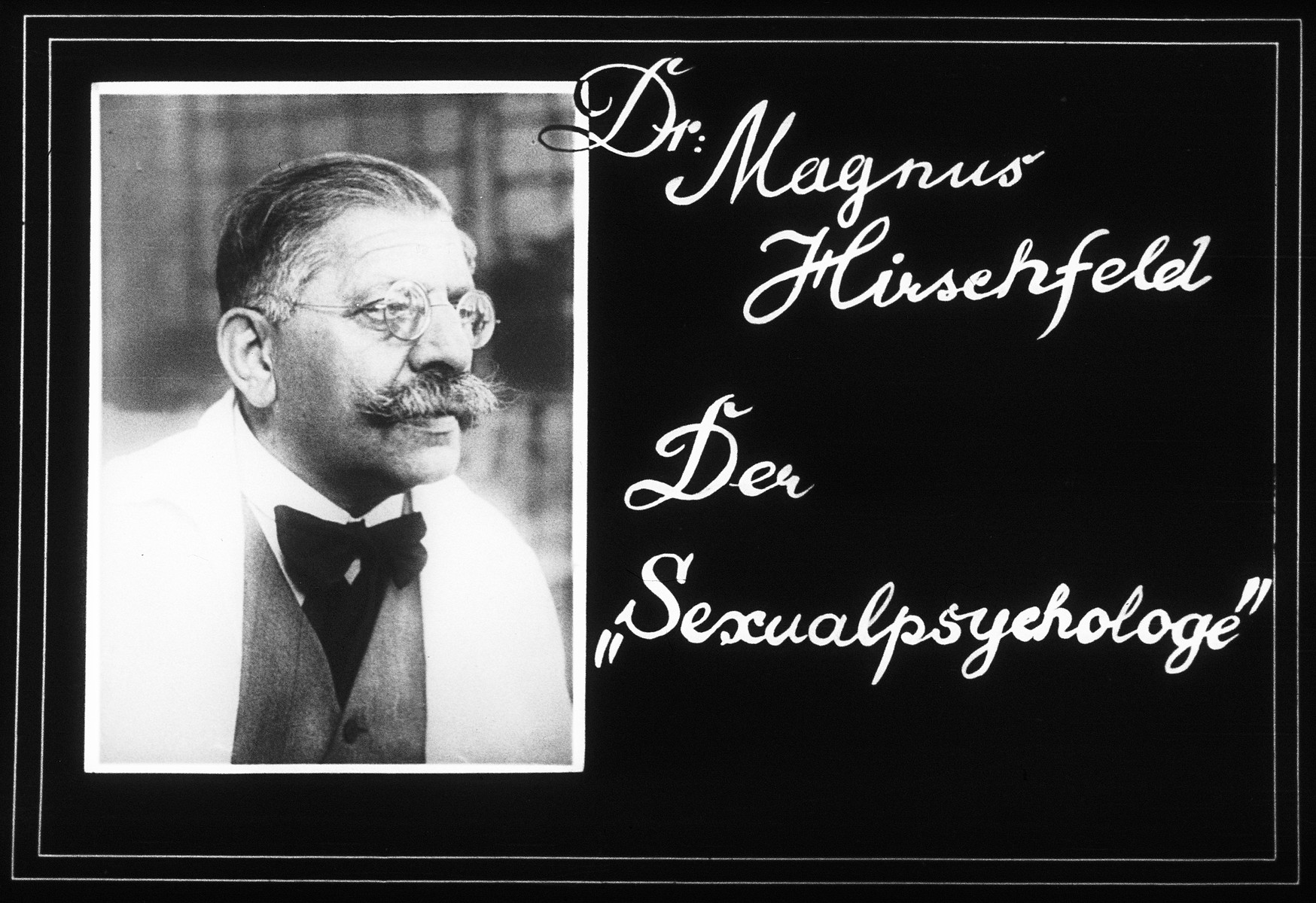 Event History
One image from a slide lecture produced by "Der Reichsfuehrer SS, der Chef des Rasse-und Siedlungshauptamtes" [the Leader of the SS, the Chief of the Race and Settlement Main Office]. The slide lecture, entitled "Das Judentum, seine blutsgebundene Wesensart in Vergangenheit und Gegenwart" [Jewry, Its Blood-based Essence in Past and Future], is Part I of the thematic series, "Judentum, Freimaurerei, Bolschewismus" [Jewry, Freemasonry, Bolshevism]. The text of the slide lecture is available at the Bundesarchiv Koblenz, record group number NS31/163.
Biography
Magnus Hirschfeld (1868-1935) was a German physician who focused his career on the study of human sexuality. Jewish and homosexual himself, Hirschfeld's personal background played an important role in his scholarly and political pursuits, as well as his ultimate fate. A part of his scientific inquiry was his political struggle to end the legal and social discrimination of homosexuals. To this end Hirschfeld founded the Wissenschaftlich-humanitäre Komitee (Scientific-Humanitarian Committee) on May 14, 1897. This led to a thirty-year campaign to repeal paragraph 175 of the German Penal Code, which designated male homosexuality as a criminal offence. In 1899 the Committee launched the publication of Jahrbuch für sexuelle Zwischenstufen (Yearbook for the Sexual Intermediates), the world's first journal devoted to homosexual studies. In the years before World War I, Hirschfeld conducted a wide-ranging survey of homosexual behavior by means of an elaborate questionnaire of over 130 items. He received over 10,000 responses, which served as the basis of his 1914 work, Die Homosexualität des Mannes und des Weibes (The Homosexuality of Men and Women). In addition, Hirschfeld produced and collected an unprecedented number of books, manuscripts and pamphlets concerning sexuality and sexual practices. This collection formed the core of the library at Hirschfeld's Institute for Sexual Research that was opened in the Berlin-Tiergarten in 1919. The Institute, which also housed the main offices of the Scientific-Humanitarian Committee and the World League for Sexual Reform, had multiple functions. In addition to being a center for sexual scientific research, it was a clinic that provided counseling and treatment for "sexual transitions" (Hirschfeld's term for homosexuals, cross-dressers, and hermaphrodites) and people with physical and psychological sexual disorders. It was also a center for political and social reform that strove to raise public awareness about the plight of homosexuals and to lobby for the lifting of restrictions on their activities. During the 1920s Hirschfeld was the subject of intense abuse and violent attack. His Institute was denounced as Jewish, social-democratic and "offensive to public morals". Right-wing youth gangs opened fire and hurled stink bombs at the crowds assembled to hear him speak. Hirschfeld himself was physically attacked twice at meetings in Munich in 1920 and 1921. In the second attack he suffered a fractured skull. In 1930 while on tour for the League, Hirschfeld was forced into exile in France. Soon after Hitler's seizure of power in 1933 the Nazis launched a campaign to cleanse German libraries of "un-German" books and other materials. On May 6, 1933 a crowd of students, supported by SS and accompanied by a brass band, stormed the Institute's offices in Berlin. The raiders carried off the contents of the library which they burned on May 10 together with confiscated collections from all over the city. At the public book burning in the Opernplatz, a sculpted bust of Hirschfeld was carried aloft by the students in a torchlight procession and tossed on top of the pyre. Hirschfeld watched newsreels of the event at a cinema in Paris. A year later he was formally stripped of his German citizenship. Following an unsuccessful attempt to set up a sexual research institute in Paris, Hirschfeld retired to Nice, where he died in 1935.