Serenella Foa poses for a bat mitzvah portrait with her family in Milan. 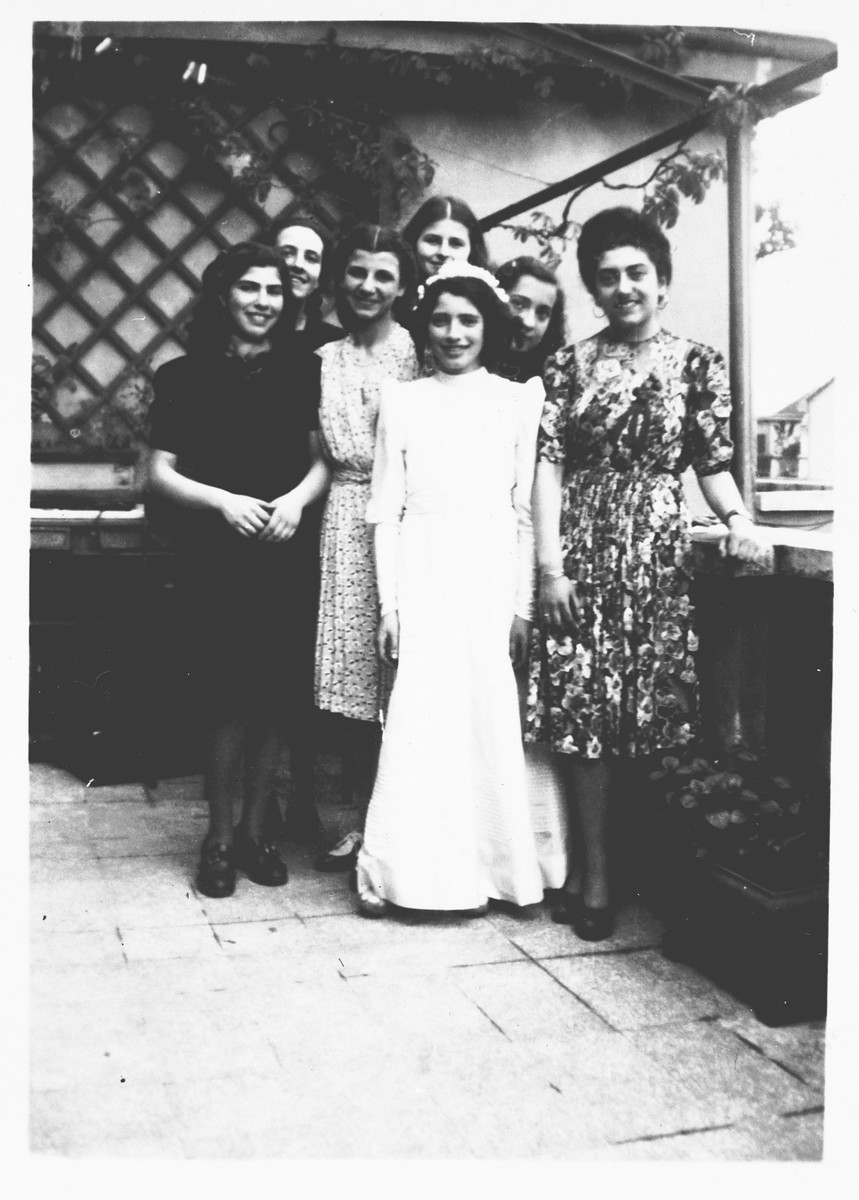 Serenella Foa poses for a bat mitzvah portrait with her family in Milan.

Biography
Esther Reisel (born Serenella Foa) is the daughter of Aldo (Eldad) Yeshaiahu Foa and Paola Sereni Foa. She was born in Naples on June 19, 1927. Her older brother Eugenio Avishua Foa was born in Piacenza on September 17, 1925, and her younger sister Amalia was born on October 10, 1935 in Rome. Aldo was both a chemical engineer and a lieutenant colonel in the Italian army. He served as a scientific officer developing ammunitions. His work brought the family from Piacenza to Rome in 1932 and back to Piacenza in 1938. Her received an award as an outstanding lieutenant colonel in 1938, but the following year, after the institution of racial laws, he was demoted to the rank of private and dismissed from the army. After his dismissal, Aldo worked as an independent consultant for chemical industries. The racial laws also forbade Serenella and her siblings from attending Italian public schools. The family therefore moved to Milan so that the children could attend a Jewish school. In either 1942 or 1943 the family moved again, this time to Aldo's hometown of Parma, to escape the frequent air raids. Aldo continued working in Milan and returned to his family on the weekends. In 1939 Serenella's maternal grandmother, Eleonora Sereni, came to live with her family; she had gone to Great Britain and returned because the uncle she went with migrated to the United States, and she could not live alone in a foreign country. In September 1943 Germany occupied northern Italy after the Allies signed an armistice with Mussolini's successors. This placed Italy's Jewish population in mortal danger for the first time. At first the Foas hid in their own house. Serenella answered the door when the SS came to summon her father. She told the officer that her father was in Milan and would not return until the end of the week. The family then realized they needed to escape immediately. Paola was too sick to flee, so the family, with the help of a sympathetic doctor who knew they were Jewish, arranged for her and Eleonora to stay at a local hospital. Serenella escorted them there. The rest of the family left the city with the help of a neighbor who found a hiding place for them in a small village in the mountains. Their rescuers were extremely friendly, and the food was abundant. However, only Serenella was free to leave the home since it would have been too dangerous for either of the men to be spotted. They could have been denounced not only as Jews but also as army deserters since they were both of military age. After some time the police summoned Serenella to the police station. She altered her ID card so that it now read Boas instead of Foa and obeyed the summons. The forgery did not fool the policeman who recognized her as a wanted Jew, but he let her go and told her to be sure to get a new identity card. However, the Foas had to leave their hiding place. Aldo and Avishua went deeper into the mountains and later joined the resistance. Serenella and Amalia returned to Parma. Serenella told people that they fled from the south, had lost their parents in the war, and that Amalia was too traumatized to talk. After returning to Parma, Serenella went to visit her mother in the hospital. She was in much worse condition due to the fact that the Germans had confiscated her medication. Serenella left her sister with Catholic friends while she stayed with her mother until her death some days later on January 10, 1944. The hospital's head nurse then assisted Serenella in finding a new hiding place for herself, her sister and grandmother in a local convent. The convent began to pressure the three women to convert. Serenella was tempted to do so to save their lives, but her grandmother and young sister flatly refused. After this, Eleonora remained in the convent while Serenella fled with Amalia to Switzerland. A priest brought the two sisters papers and also the news that the Gestapo had arrested Aldo as a member of the resistance, but that Avishua had managed to escape to Switzerland. Serenella and Amalia arrived in Switzerland during Passover, 1944, and the following year they immigrated to Israel. Aldo perished in Mauthausen on May 12, 1944.

Serenella later married Rudi Reisel, a Dutch survivor who had been active in the resistance and hidden in the home of Protestant minister. He had lost his parents and two sisters in the Holocaust.