Studio portrait of a Belgian family with the Jewish child they are hiding. 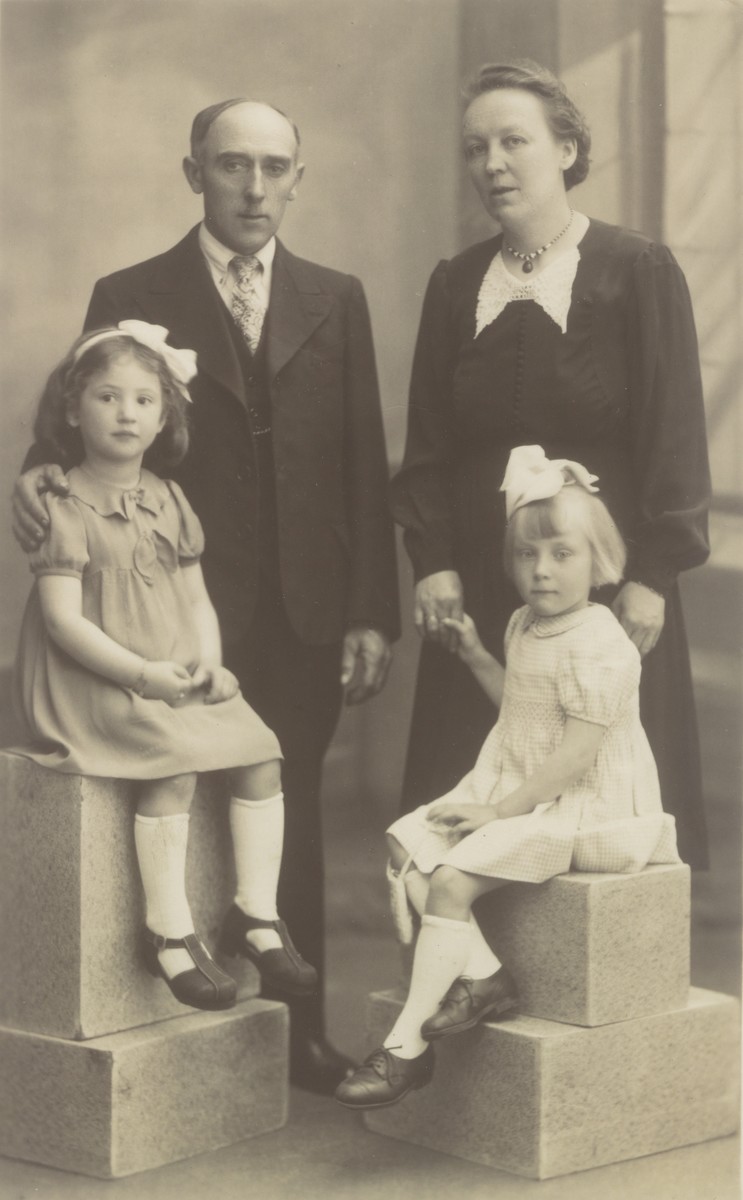 Studio portrait of a Belgian family with the Jewish child they are hiding.

Pictured clockwise from the top left are: Leon and Maria Janssens,Gilberte Janssens and Goldine Ehrenfeld.

Biography
Goldine Teicher (born Goldine Ehrenfeld) is the daughter of Adolph and Klara (Feldman) Ehrenfeld and the cousin of the donor, Alfred Philip Feldman. She was born in Antwerp, Belgium in 1939. Goldine had three older siblings: Bella, Dora, and Mordechai. Her family had fled to Antwerp from Cologne, Germany in 1938 following the Kristallnacht pogrom. They chose to move to Antwerp to be near the family of Klara's brother, Joachim Feldman. After the German invasion of Belgium, the Feldman family fled to southern France. Since the Ehrenfelds spoke only German, they decided to remain in Antwerp and moved into the Feldman's home. A year or so later, the Ehrenfeld family was rounded-up for deportation. Before their arrest, Klara made arrangements with Delphine (nee De Wilde) Janssens, the Feldman's maid, to care for Goldine who was still a baby. Delphine agreed but approached the Jewish council in Antwerp for financial assistance to care for the child. The Council sent her regular checks and kept careful records of the payments. This record keeping ultimately led the Germans to Delphine when they raided the offices of the Jewish council in Antwerp. Before she was arrested, however, Delphine managed to bring Goldine to the home of her brother-in-law and his wife, Leon and Maria Janssens. The Germans continued their search for the child and eventually came to the home of Leon and Maria, but they never found the baby, because she had already been transferred to a convent. Goldine remained there until the end of the war. Delphine was in prison awaiting deportation at the time of liberation. Goldine's parents and siblings all perished during the Holocaust. After the war, Delphine wrote to a sister of Klara who was living in the United States and told her that Goldine had survived. Joachim wrote to the same sister and learned the whereabouts of the child. His own wife and three of his children perished so he was unable to care for the little girl initially and placed her in a Jewish orphanage. After he remarried, he adopted his niece and brought her with him to the United States. In 1981 Delphine, her husband Hector Janssens, and Leon and Maria Janssens were honored as Righteous Among the Nations.