Nina Szapszewicz Ginter holds her infant son, Bogdan, while posing as a Polish woman in Warsaw. 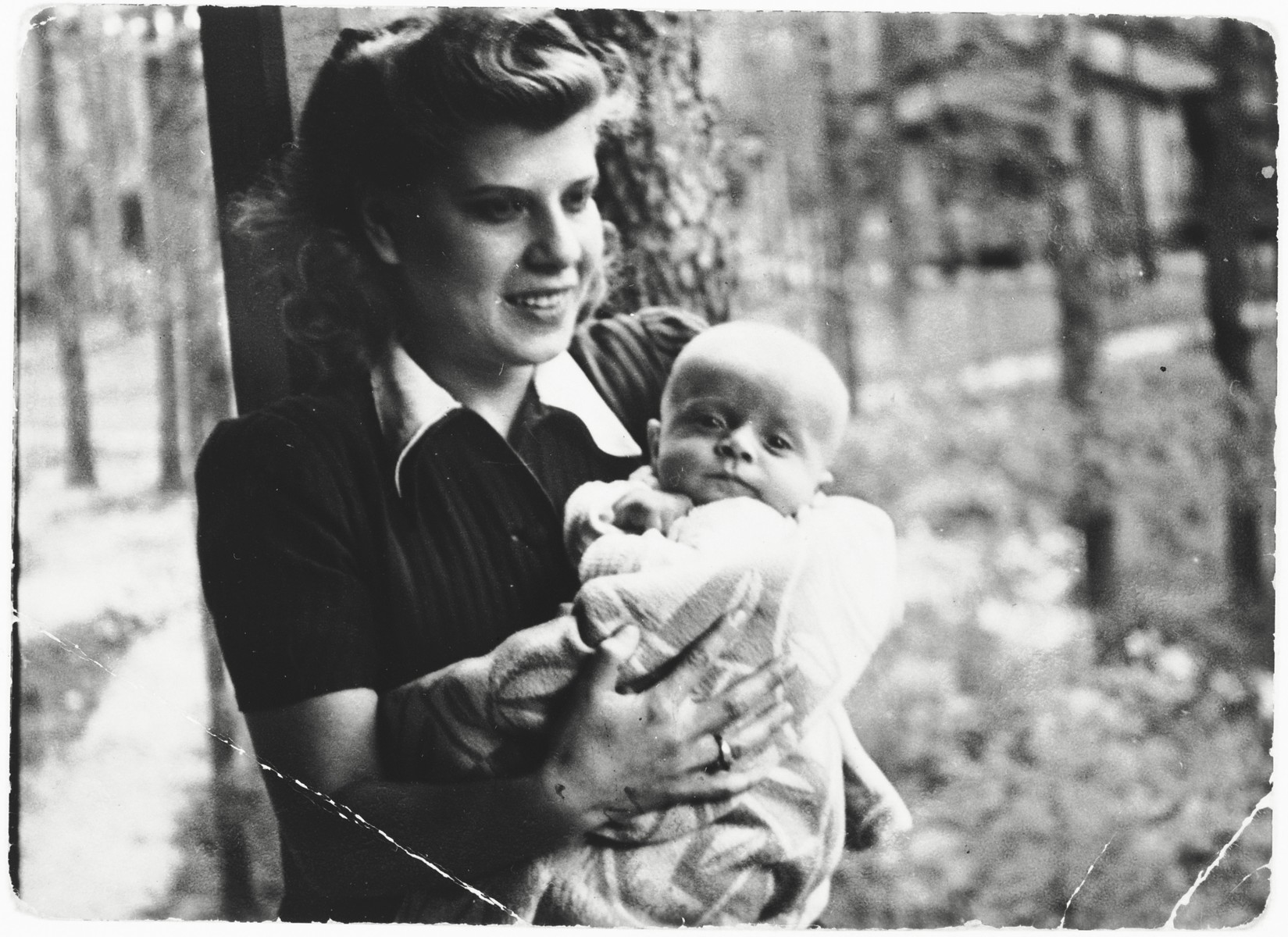 Nina Szapszewicz Ginter holds her infant son, Bogdan, while posing as a Polish woman in Warsaw.

Biography
Nina Bogucka-Dal (born Nacha Szapszewicz) is the daughter of Fajwel Szapszewicz and Rajzla (Roza) Silberstein Szapszewicz. She was born on December 15, 1919 in Lodz, Poland where her father owned and worked in a small textile workshop. Nina had five older siblings: Jakub Kuba, born in 1905; Josef Natan, born in 1908; Benjamin, born in 1910; Tosia, born in 1913; and Sala, born in 1916. After graduating from Gymnasium, Nina helped in her father's business and managed his bookkeeping. In the summer of 1939 Fajwel and Roza Szapszewicz went on vacation to the resort town of Krynica, but left instructions for Nina to gather food for the impending war. In August 1939, Nina left for her vacation to Piotrków Trybunalski. On September 1, 1939 Germany invaded Poland and immediately bombed the city of Lodz. Nina returned home. Her older brother Josef Natan fled to the Soviet zone, but after two months he returned for his wife Ida and their daughter, Maryla. He wanted Nina to come with them as well, but her mother refused to give her permission. In December 1939 Roza Szapszewicz left Lodz for Warsaw with Tosia (along with her husband Arek Rotgel and daughter Ninka) and Sala. Nina remained in Lodz with her father. In the winter of 1940 Nina was forced into slave labor. Every morning an ethnic German from Lodz ordered her to clean the local school, and he demanded that she do it without her underwear. In the meantime Roza Szapszewicz was ailing, and in March 1940 she died of cancer. She was buried in the Jewish cemetery, and Fajwel Szapszewicz sold his gold watch to erect a tombstone. Nina and her father then moved to Warsaw to live with her sisters. They continued to correspond with Jakub, who remained in Lodz with his wife and child, as well as with Benjamin Szapszewicz and his wife. Nina had to find ways to support herself and help her family. She approached a man in the Fuks chocolate factory store and asked to buy 20 lbs. of candy on credit. To her surprise, a Mr. Werner responded positively to her request. Nina took the package, her father sold the candy, and Nina returned the next day to pay for the merchandise. This routine enabled Nina and her family to support themselves for a few months.

In November 1940, the Germans sealed the Warsaw ghetto. Nina moved to Nalewki Street and met her future husband, Josef Jozek Ginter, who had false papers under the name of Jozef Ginterski. Jozek, who also was from Lodz, owned a store together with two partners: Mr. Wronski, a Jew, and Piotr Dobrzynski, a Pole. Although their store was located outside the ghetto wall, they had a permit allowing them to take merchandise produced in the ghetto and sell it in their store. This gave them free access to the ghetto. Jozek arranged for false papers for Nina, and in the spring of 1942, the two were married in the ghetto. A few months later, on June 29, 1942, during a birthday party for Piotr Dobrzynski, Jozek asked Nina to leave the ghetto for the Aryan side. Nina wanted to stay with her father, Fajwel, but her father insisted that she flee. He went with her to the court building on Leszno Street (which had one entrance on the ghetto side and one entrance on the Aryan side) and pushed her out. After this, Nina stayed at different addresses in Warsaw, under different names. In April 1943 Jozek and Nina purchased an apartment outside the ghetto, and Nina lived there as Maria Stanislawa Malecka. Two months later, on June 10, 1943 Nina gave birth to a son, Bogdan. She started to study bookkeeping, but after a while decided that it was too dangerous to attend public classes and hired a tutor. Nina wanted to leave Warsaw, but Jozek refused because of his business. Jozek visited Nina and Bogdan as often as he could. On April 26, 1944 the Gestapo arrested Jozek and his Jewish partner, Wronski. They were imprisoned, and subsequently killed in the Pawiak prison in Warsaw.

In August 1944, after the suppression of the Warsaw uprising, the Germans expelled the Polish population of the city. Nina and Bogdan fled with Mrs. Wronska and her son, and they lived together for about six months in a village north of Warsaw. After liberation Nina met and married Mr. Bogucki, but did not tell him that she was Jewish. While visiting Lodz, Mr. Bogucki met a former superintendent of the building where the Szapszewicz family had lived, who revealed that Nina was Jewish. Her marriage to Mr. Bogucki did not last, and she later married Mr. Dal (formerly Schleifstein).