Premysl Pitter (left) poses with a group of young DP children living in one of "The Castles" children's homes he established along with Olga Fierzova. 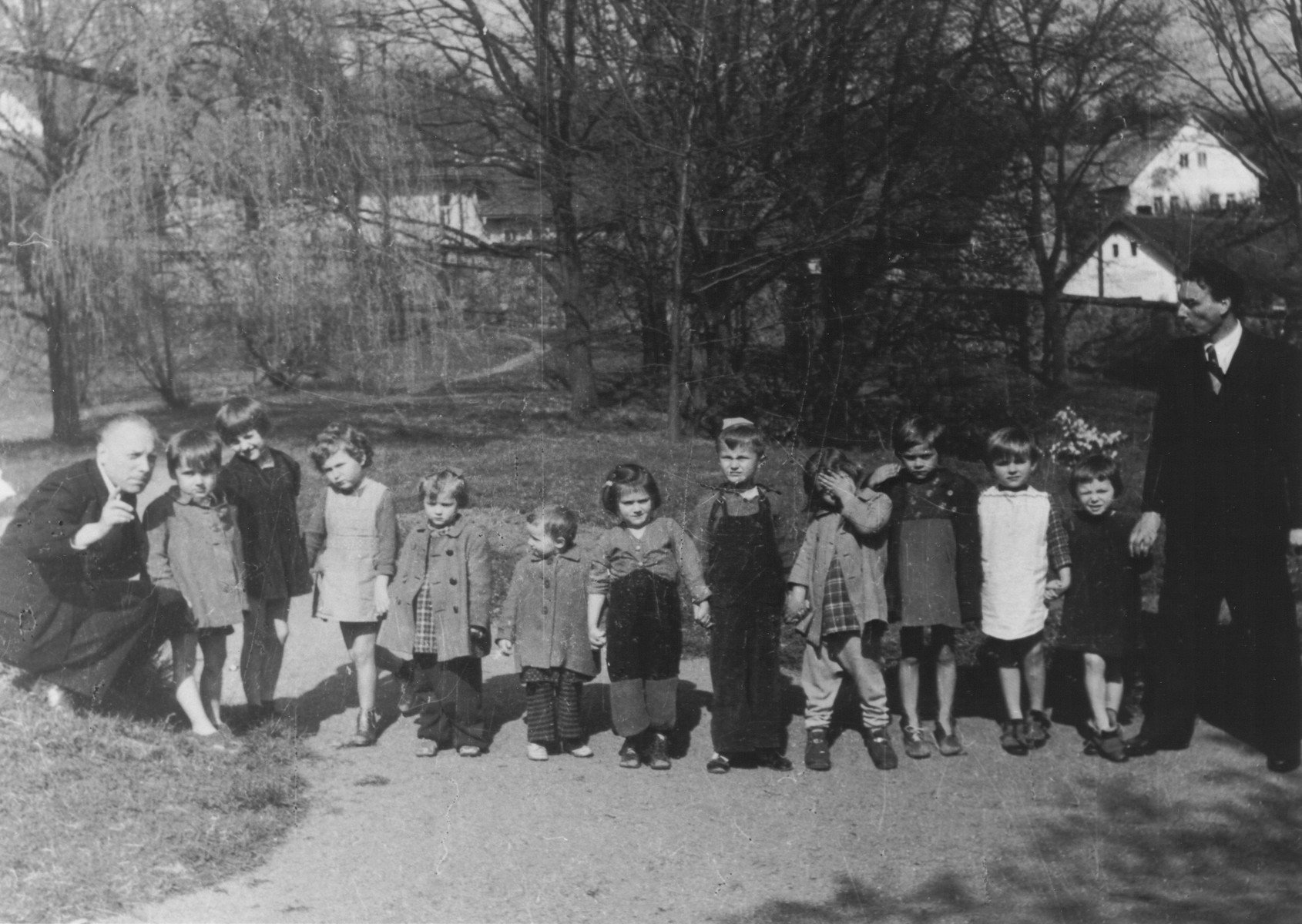 Premysl Pitter (left) poses with a group of young DP children living in one of "The Castles" children's homes he established along with Olga Fierzova.

Biography
Premysl Pitter (1895-1976), Czech pacifist who ran a series of children's homes to care for disadvantaged and refugee children before, during and immediately after World War II. Pitter was born into an artisan family in Bohemia. He was largely self-taught, and worked as a printer before joining the army in World War I. His experiences during the war turned him into an avowed pacifist and devout Christian. After the war Pitter immersed himself in the works of pacifist writers and in 1924, he founded a journal called Sbratreni (Brotherhood) to spread ideas of peace and brotherhood. The following year Pitter became involved in the Prague chapter of the Fellowship of Reconciliation, an organization that reached out to Czechs, Germans, and Jews alike. He also acted as representative of the War Resisters' International and helped to counsel conscientious objectors. For this he was jailed in solitary confinement for several months. When he saw the appalling conditions in which thousands of war widows were left to bring up their families alone and without money, he started to work with their children. In 1933, together with Olga Fierzova, a Swiss teacher who had moved to Prague in the late 1920s, Pitter opened the Milicuv dum, a refuge for deprived children in the poor Prague suburb of Zizkov. At a time of rising ethnic and national tensions, this was a home open to all children. In 1938 they opened a second children's home in the country, in the town of Myto near Rokycan. After the Germans marched into Prague and Jewish children were expelled from the school system, Pitter welcomed large numbers of them into his homes. He also secretly took milk and fruit to the families of Jewish children that were unable to come to his center. During the period of mass deportations Pitter hid many children in his homes, but ultimately most were caught by the Nazis and sent to concentration camps. After the war, the newly established Czechoslovak government put him in charge of helping orphaned Jewish children who were returning from Theresienstadt and other concentration camps. With the support of UNRRA, Pitter and Fierz set up of a series of children's homes known as "The Castles" in Stirin, Olesovice, Kamenice, Lojovice and Ladvi. In addition to Jewish children, Pitter took in hundreds of German refugee children, whose families were being held in Czech internment camps prior to their mass expulsion from Czechoslovakia. In the two years of their existence over 800 children were cared for in these homes. After the communist takeover of Czechoslovakia, Pitter as a Christian and a pacifist, became a persona non grata. In 1951, after receiving threats of imminent arrest and deportation to a labor camp, Pitter fled to Germany. For a time he worked at a camp for refugees fleeing communist Czechoslovakia near Nuremberg. Then he moved to Zurich, Switzerland, where he worked for the Johannes-Huss parish. He died there in 1976. Pitter was recognized by Yad Vashem as one of the Righteous Among the Nations in 1964. Olga Fierzova, his life-long companion and collaborator, received the same honor in 1966.