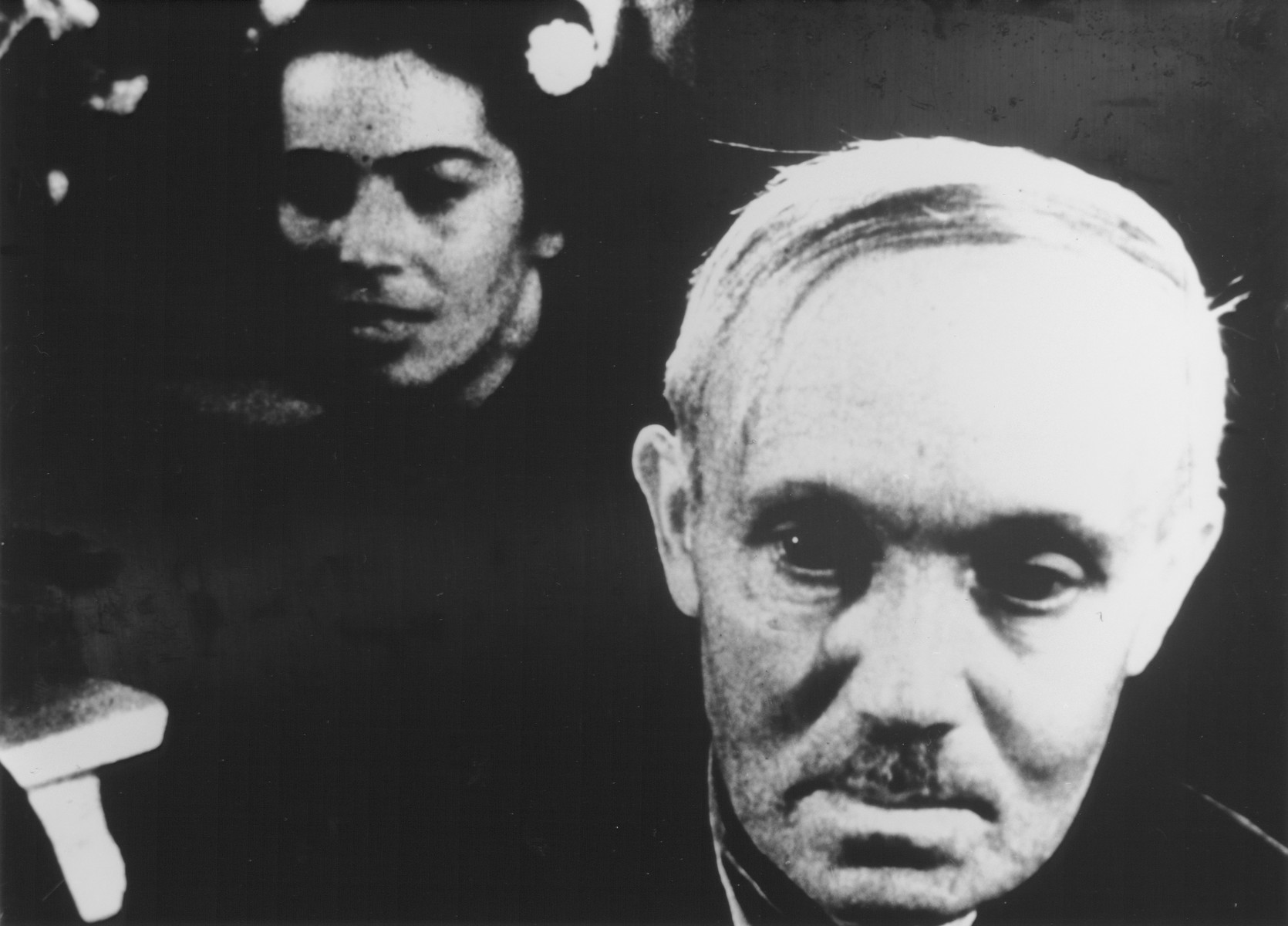 The man pictured has been tentatively identified as Rudolf Saudek (1880-1965), Czech Jewish sculptor and graphic artist who lived and worked in Germany between 1910 and 1935. After he was prohibited from working in Germany, he returned to Prague. In 1942, he was imprisoned in the Theresienstadt camp. He survived, and after the war became a professor at the Academy of Fine Arts in Prague.

Event History
The SS, seeking to exploit the beautification efforts undertaken at Theresienstadt in preparation for the Red Cross visit of June 23, 1944, decided to produce a film about the ghetto for propaganda use in Germany. Entitled "Der Fuehrer Schenkt den Juden eine Stadt" [The Fuehrer gives the Jews a City], its purpose was to show the pleasant life of Jews in a town that was generously given to them by the Nazi regime, in contrast to the hardships faced by Germans under the Allied bombardment. Aktualia, a Prague firm specializing in documentary films, was hired to make the movie, while Kurt Gerron, a Theresienstadt inmate and former cabaret actor, was assigned the role of producer and director. Prisoners were forced to serve as members of the cast. Though the film was shot in August and September, 1944, it was not completed until March 1945. At that time the documentary was seized by the German authorities. Only a portion of the original film survived.
[Source: Zdenek Lederer, "Terezin," in "The Jews of Czechoslovakia": 3: 134-8]
See https://encyclopedia.ushmm.org/content/en/article/theresienstadt.
See Also "Terezin" in Encyclopedia of Camps and Ghettos, Volume 2 Part A.
See Also https://encyclopedia.ushmm.org/content/en/article/nazi-propaganda.
Biography
Ivan Fric was born in Prague on October 22, 1922. His father was an ethnographer and a specialist on Latin-American Indians. Ivan Fric attended the State Graphic School (1937-39), where he was trained as a photographer. He then worked at BaPoZ (1940-41), a company specializing in the production of children's films. In 1941 he joined the Aktualita newsreel company, where he worked as an assistant cameraman and film cutter. In 1944 the company was contracted by the SS to produce a Nazi propaganda film about Theresienstadt. Fric was one member of the five-man film team led by Aktualita's owner and chief director, Karel Peceny. Fric and Cenek Zahradnicek were the two cameramen on the team. All worked under the strict control of the SS and were forced to sign a statement that any disclosure to outsiders about anything they saw in the ghetto would result in reprisals against them and their families. The series of still photos Fric took of the arrival of a transport of Dutch Jews in Theresienstadt are not clandestine images, but rather part of the footage shot on the order of the SS. The series was taken on January 20, 1944. After the war Fric continued to work as a cameraman, shooting newsreels for the Czechoslovak state newsreel company.