Studio portrait of a Jewish girl in hiding wearing her first communion dress kneeling on a bench with her hands clasped in prayer. 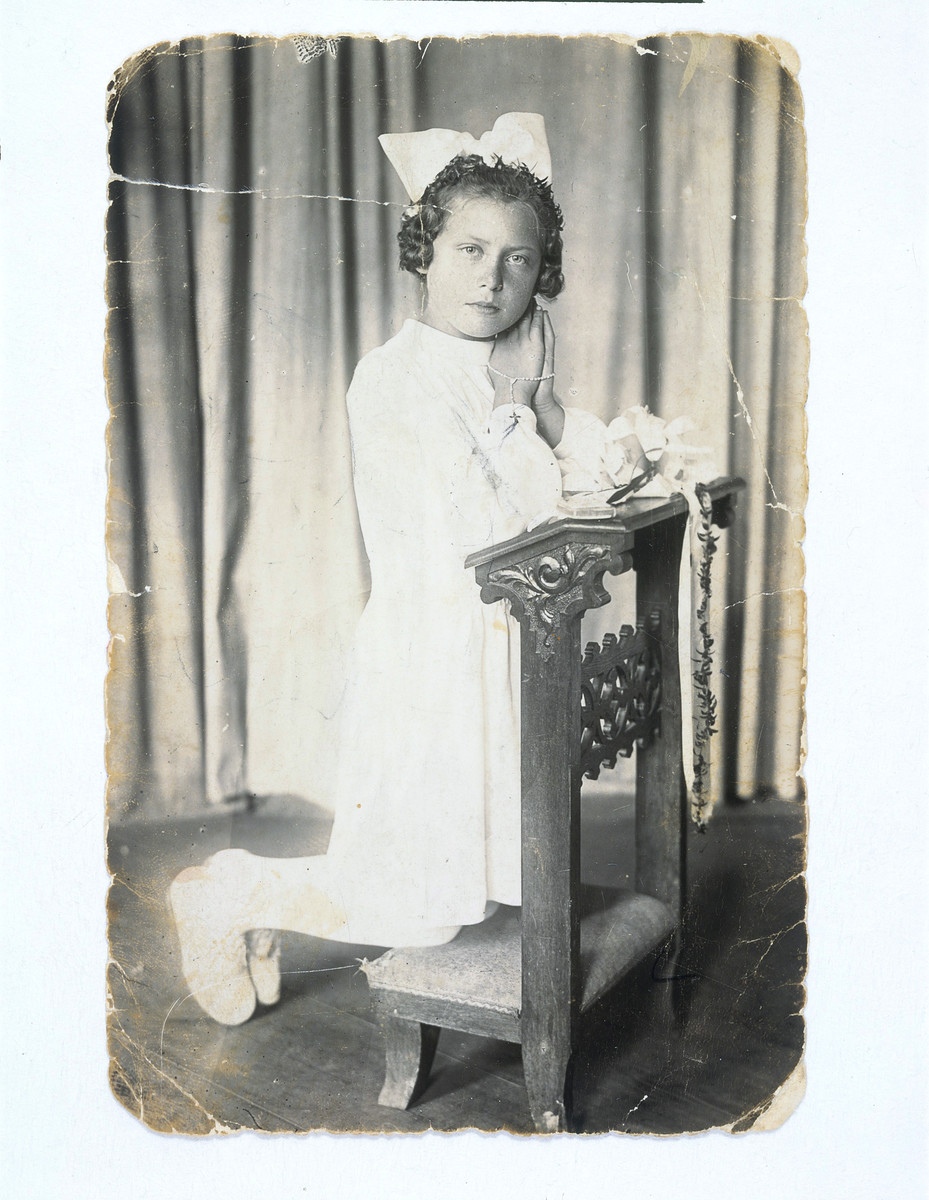 Studio portrait of a Jewish girl in hiding wearing her first communion dress kneeling on a bench with her hands clasped in prayer.

Biography
Felicia Bryn (born Felicja Braun) is the daughter of Dawid Braun and Bluma Gliksman Braun. She was born as on August 22, 1937 in Warsaw where her father was a physician. Originally from Kalisz, Dawid's grandfather was a well-known rabbi. Felicja's mother, Bluma Gliksman Braun (b. 1915 in Wielun) was a daughter of Rabbi Fajwel Gliksman, an Agudah Israel activist. Felicja's younger brother, Jurek (Jakub) was born in 1939. In September 1939 the family escaped the German bombardment of Warsaw to join the Braun family in Kalisz. On November 20, 1939, in order to make room for Baltic Volksdeutsche, the Germans evicted Jewish families and deported them to the Lublin district of the General Government. Following the deportation, several thousand additional Jews managed to escape from Kalisz and dispersed over many parts of Poland; the Brauns were among nearly 7,000 who found refuge in the Warsaw ghetto. Bluma's sister, Frajdla Frania Gliksman joined them there. On December 22, 1941 Bluma Braun died of typhus and was buried in at the Jewish cemetery on Okopowa Street. Dawid married his sister-in-law, Frania, soon after Bluma's death but lived on false papers on the Aryan side of Warsaw. Posing as Zygmunt Bakowski, he traded in the black market to bring extra food to his starving family in the ghetto. During one of the round-ups in the ghetto, Frania shoved Felicja and her three-year-old brother, Jurek, into a coal box. She pushed the coal box under the table and put a bucket with water on top. All the residents of the building were ordered out, and Frania hid in a bunker, leaving the children behind. Jurek cried desperately, but Felicja shoved her fist into his mouth and Jurek quieted down. The German soldiers searched the apartment, but did not discover them. Dr. Dawid Braun obtained false papers for his daughter, under the name of Felicja Garbarczyk. In the summer of 1942, Frania dressed Felicja in a new, light blue dress and told her that she was going to her grandmother. Felicja questioned this, knowing that her maternal grandmother lived in Grzeska, a large farm near Wielun. Aunt Frania told her to be an actress like Shirley Temple and lie about her real identity. Felicja left the Warsaw ghetto via the courthouse on Leszno Street, while a bribed guard looked the other way. She followed her aunt's instructions and arrived in a strange apartment led by a strange man. Her father arrived in the evening, and the next day he took her to an elderly woman, with whom Felicja stayed for a few weeks. During that time she learned the Catholic prayers. The strange man, who led her out of the ghetto accompanied Felicja on a to the village of Legionowo, near Warsaw. Dawid, Frania, and Jurek Braun hid in the forest nearby. A few weeks later, Felicja went to Chelm, near Lublin. During the journey German soldiers with dogs searched the train for Jews. Felicja laughed together with other passengers at the sight of attacked Jews, pretending that she was Shirley Temple. From Chelm, Felicja walked together with her strange guardian until they met Kazimierz Sroka on a bicycle, and he took her to Pogranicze village. Kazimierz and his wife, Leokadia, were a middle-aged childless couple. Dawid Braun arranged for this hiding place, promising Mr. Sroka a property and financial reward from an American relative. He gave the address of Nusyn Gliksman in the U.S. to Mr. Sroka, who in turn made Felicja memorize it. Once, Kazimierz's sister-in-law Pela threatened to denounce the family to the Gestapo for harboring a Jewish child. Felicja always remembered this scene and never talked to Pela again, even when the events were long forgotten by the family. As a result of this quarrel, the Srokas moved with Felicja to the village of Deniska. Kazimierz Sroka was strict with Felicja, but at the same time taught her to read and took good care of her. He even invited Krysia, a niece of his wife, to stay with them so that Felicja would have company. On Christmas 1942 Felicja's father, disguised as uncle Zygmunt, appeared in the Sroka household. He brought gifts for both girls, but made sure to bring nicer gifts for Krysia. On the last day of the visit, Dawid told his daughter to be a good Christian, and then sang a popular song for her: "This is the last Sunday. Today we part forever." In 1945, after liberation, the Srokas returned to their native village, Gowarzewo near Poznan, from which the Germans evicted them in 1939. Felicja maintained her Catholic identity. After the war, Felicja's maternal uncle, Nusyn Gliksman, corresponded with Kazimierz Sroka and requested that Mr. Sroka transfer Felicja to the auspices of the Central Jewish Committee, but Mr. Sroka refused to give Felicja up. In 1957, an Israeli diplomat acting on the behest of the Gliksman family approached him, but Felicja was already 19 years old. Felicja decided to immigrate to Israel but arrived still wearing her gold cross. Felicja felt that she was a Catholic and found it very difficult to adapt to a new life in a Jewish state, as a Jew. In 1959 Felicja met and married Nathan Bryn, a survivor of the Stalowa Wola concentration camp. After liberation Nathan studied opera and cantorial singing in the Salzburg Music School. The young couple moved to New York, where Nathan studied to become a rabbi, and Felicja adopted the Orthodox Jewish life style.