Identification card issued in Berlin for the Lithuanian woman Elena Petrauskas and her "daughter" Danute. 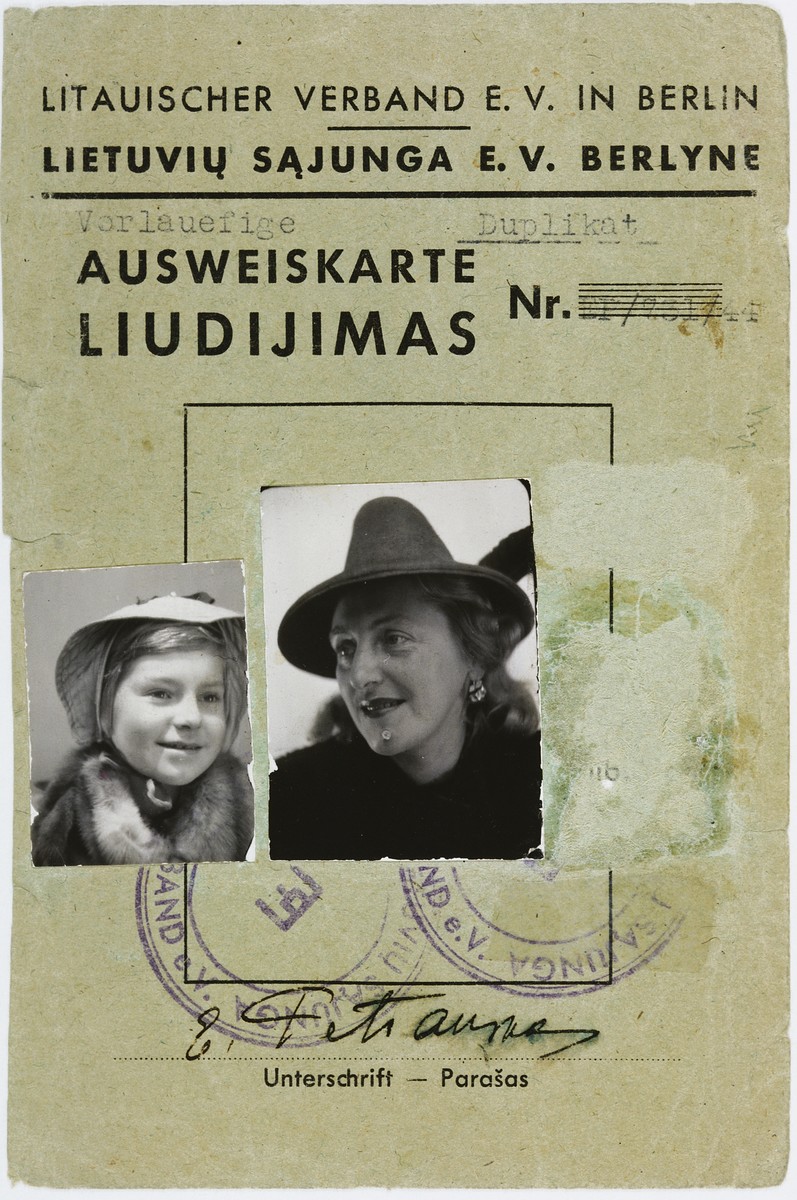 Identification card issued in Berlin for the Lithuanian woman Elena Petrauskas and her "daughter" Danute.

Biography
Dana Pomerants-Mazurkevich (born Danute Pomerancaite) is the daughter of Daniel Pomerants and Lusya Zolkov. Daniel was born in Siauliai and worked as a concert violinist. Luicia, originally from Kretinga, had worked as teacher. Danute was born in the Kovno ghetto on October 11, 1941 and survived the selection of the Great Action as a baby less than a month old. Some time in 1942, at age one and a half, Danute's parents arranged for a Lithuanian by the name of B. Simonavicius, to smuggle Danute out of the ghetto in a sack of potatoes. Though she was drugged so that she would not make noise, she awoke at one point and let out a small squeal. A policeman heard the sound. After questioning Simonavicius who claimed he was carrying a small piglet, he let him pass. Simonavicius brought the baby to close friends of the Pomerants family -- Kipras Petrauskas, a famous opera singer and his wife Elena Zalinkevicaite, a stage actress. Since Petrauskas and his wife did not know the baby's first name, they named her Danute. She kept that name for her entire life. The Petrauskas family had three of their own children, Liuka ten years old, Guoda ,eight and Ausra ,four, but they always treated Danute exactly the same as their own children. Since Kipras and Elena were well-known figures on the Kaunas stage, it would have been obvious if they suddenly had a fourth child. They therefore fled Kaunas for the small village Palanga. As Soviet troops approached the village in 1944, its residents fled westward. The Petrauskas family, Danute included, fled first to Austria and later to Germany where they settled in Stuttgart. Meanwhile in early July 1944, with the liquidation of the Kovno ghetto, Daniel was deported to Dachau. Lusya managed to escape the destruction of the ghetto and hid in Kaunas in the Petrauskas' former home where she posed as a maid with dyed blond hair. After liberation, Daniel returned to Kaunas to look for his daughter. He reunited with Lusya but found Danute only in 1947 after the Petrauskas family returned to Kaunas. It took Danute almost a year before she believed Daniel and Lusya were her real parents. Throughout her life Danute continued to call both sets of parents, mother and father. Danute later studied violin with David Oistrakh in the Moscow conservatory following in her father's path. In 1999 Kipras and Elena Petrauskas were recognized as Righteous Among the Nations.