Jewish teenagers celebrate a bar mitzvah in the dining hall of the Wezembeek children's home in Belgium. 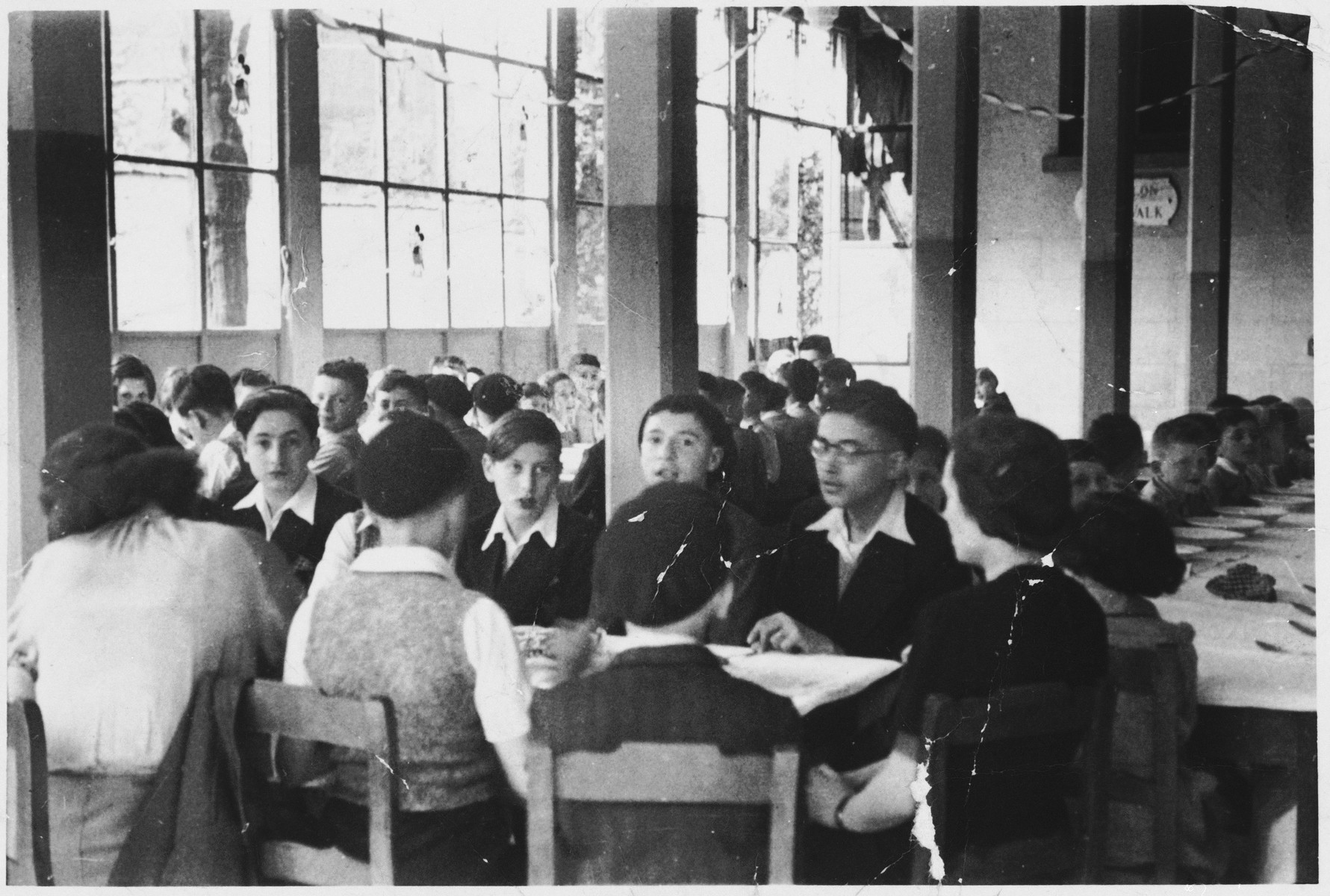 Jewish teenagers celebrate a bar mitzvah in the dining hall of the Wezembeek children's home in Belgium.

Event History
The Wezembeek-Ophem children’s home on Malines Street opened on September 1, 1942. It was run by the A.J.B (Association de Juifs en Belgique) and subsidized by L’Oeuvre Nationale de l’Enfance (National Agency for Children, O.N.E.) with the full knowledge of the Germans. Yvonne Feyrick-Nevejean headed O.N.E. and the queen mother, Elisabeth served as its honorary president. Marie Albert was chosen as director of the home. 58 children lived in Wezembeek, of whom the youngest was less than two years old. Most of the children came from either Germany or Austria, and their parents had already been deported. On the afternoon of Friday October 30, 1942 a Gestapo truck pulled up to the home. Three armed S.S. men entered the home, rounded-up the children and eight staff members and brought them to the Malines transit camp for deportation to Poland. After learning the news, Yvonne Nevejean immediately contacted Queen Elisabeth. Queen Elisabeth, along with Leon Platteau of the Belgian Ministry of Justice, intervened with German military administration and succeeded in releasing all of the children and staff. Some of the older children even managed to grab an additional six children slated for deportation and bring them with them back to the home. For the next two years, Marie Albert and her staff provided the children of Wezembeek with food, clothing and a Zionist education. Though the home was not religious, it celebrated the Sabbath and Jewish holidays. The Gestapo inspected the home on occasion, and the children had to wear Jewish stars when they went for walks outside of the home. By 1944 over 100 children lived in the home. During the summer of 1944 the Germans decided to reverse their policy of protecting the children in the A.J.B. homes. Luckily members of the O.N.E. had been tipped off about the impending round-up. On August 26 or 27 1944 Yvonne Nevejean came to Marie Albert and told her she had to hide the children in a hurry. Yvonne Nevejean found hiding places for all the children as well as those in other AJB children’s homes, Linkebeeek, rue des Patriotes, and two nurseries. For the next ten days, the children hid in monasteries, convents and private homes until liberation of Brussels. After liberation, the children returned to Wezembeek. The home operated as post-war children’s home until the children left for other places, mostly Canada, United States and Palestine. Both Yvonne Nevejean and Queen Elisabeth were later recognized by Yad Vashem as Righteous Among the Nations.

https://www.ushmm.org/wlc/en/article.php?ModuleId=10005432.
Biography
Judith Schreiber (born Judith Tiefenbrunner) is the daughter of Jonas and Ruth (Feldheim) Tiefenbrunner. Jonas was born June 18, 1914 in Wiesbaden, Germany, two years after his parents had moved from Poland. The family was deeply religious and Jonas had eight siblings. He was active in the Orthodox Zionist Ezra youth movement and belonged to an agricultural hachshara [Zionist collective] in Frankfurt, where he met his future wife, Ruth Feldheim. In November 1938, when his parents were expelled to Poland, Jonas managed to escape to Belgium and joined his brother, Phillip, who had previously settled in Antwerp. In Heide, a town just north of Antwerp, Jonas founded a youth home and yeshiva for religious boys aged 15 to 17 who had come to Belgium on a Kindertransport. The students divided their time between work on nearby farms and their religious and secular studies at the school. Ruth Feldheim had fled separately to Belgium and worked as a cook in another children's home. She and Jonas renewed their acquaintance and were married on May 9, 1940, the day before the Germans marched into Belgium. Both Ruth and Jonas were briefly detained as enemy aliens and released. The children at Jonas' home had dispersed in the meantime, and Jonas immediately set out by bicycle to find them. He reestablished his home on the General Drubbelstraat, in what had been an old age home, but lacked for the basic necessities, including food. One day an anonymous donor rang the doorbell and gave him a large sum of money that solved his worries for the short-term. Funding for the home became more secure when the AJB (Association des Juifs en Belgique) assumed official responsibility for it in late 1941. Officially called Orphelinat Israelite de Bruxelles, but affectionately known as "Chez Tiefenbrunner", the home moved to rue Patriotes in Brussels. The home was able to operate openly because the Germans wanted to maintain the pretense that only able-bodied adults were being sent for forced labor. All the children were under the age of 17 and most were refugees from Germany and Austria who arrived in 1939. Jonas ran the home like the father of a large religious household. He blessed each child individually every Sabbath eve. Throughout the war, there were daily religious services at the home, and all Jewish holidays were observed (including building a Sukkah and baking matzah). In addition, the children were taught both secular and Jewish subjects. The older children helped care for and teach the younger children. On a few occasions, the Gestapo raided the home looking for children over the age of seventeen or adults illegally hiding there, and once arrested Jonas. He was released almost immediately and no harm came to the children. In August 1944, SS Lieutenant Burge decided to deport all previously protected Jews, including the orphans in the AJB homes. Luckily, Jonas received advanced warning and was able to take all the children to a convent run by an acquaintance, Father R.P. Robinet. Two weeks later, Brussels was liberated. After the war, Jonas Tiefenbrunner started a new children's home in Mariaburg for children who had been interned in concentration camps and orphans who had been in hiding. They later moved to Antwerp in a building that belonged to the Jewish School on the Van Ruisbroek Straat and the to Gl. Drubbelstraat. Jonas Tiefenbrunner continued to direct the home until 1960. Two years later he died of heart failure at the age of 48.