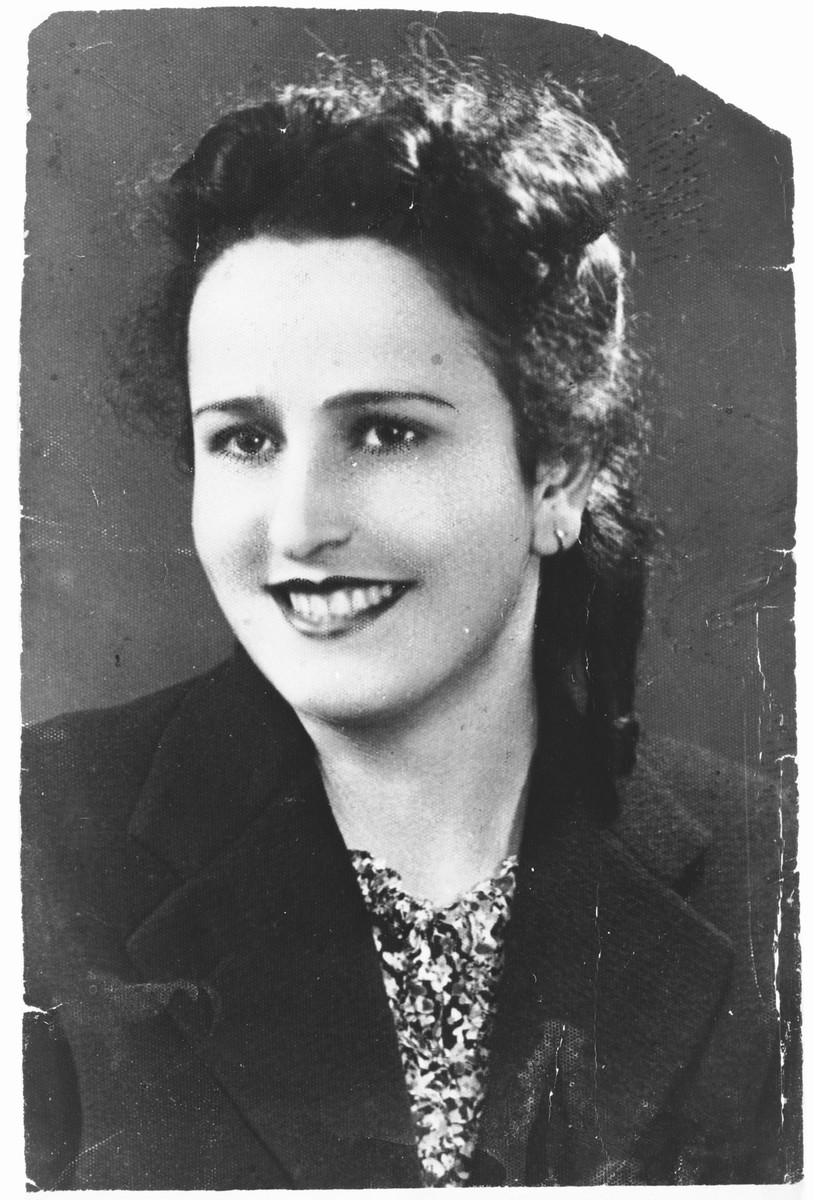 Biography
Claude Hampel is the son of Genia (Genowefa) Tola Wasserman. Genia was born on July 5, 1920 in Warsaw. Her mother Emilia Wasserman, née Minska, came from a middle-class family that had lived in Warsaw for several generations. Her father, Marian Wasserman, fought for Poland in the Russo-Polish War in 1920 and was badly wounded. Genia had an older brother who studied law and an older sister, Léa, was studying to be a nurse. In September 1939, Germany invaded Poland and the following year, the family was incarcerated in the Warsaw ghetto. Marian, who already was suffering from poor health because of war wounds, probably died early on in the ghetto. Genia had an identification card which allowed her to work outside the ghetto in a factory, making uniforms for German soldiers. One day, she returned from work to discover that her mother had been arrested. Her sister, dressed as a nun in an infirmary, had already been denounced by someone who recognized her while she was riding on a streetcar. In March 1943, Genia received a deportation order from the Warsaw ghetto. While she was actually at the Umschagplatz, ready to get on a deportation train to the camps, a Polish government official, Mieczyslaw (called "Petek") Wrobel, noticed her because she was extremely attractive, with dark hair and green eyes. He warned her not to get on the train or to go to the factory where she usually worked and promised to find her a safe place outside the ghetto. It is not clear how, but he spirited her away and hid her at the home of a female cousin in Warsaw. She left together with a male friend named Albert. Wrobel arranged for the couple to stay with his relatives, Antoni and Helena Michalski, in the small town of Piastow, about 10 kilometers from Warsaw. To pay for her keep, Genia either helped with farmwork or did sewing and alterations. Genia was probably about one-month pregnant when she arrived in Piastow. She was hidden in the cellar of the Michalski's house. The day her son was born, the family dug a small hole in the garden to place the baby. It was risky enough hiding two adults, but it was too dangerous to also hide a hungry baby who could be heard crying. Therefore, Genia returned with her baby to her family's previous apartment outside the ghetto (where they lived before October 1940, and where her mother had hidden jewelry under the floorboards). She also dyed her hair blond so that she could leave the house or stay on the ground floor. Slowomir often was sent to a farm outside the village to try to get milk since Genia could not breastfeed the baby. The child was named "Kasimierz" (later Claude) because the name did not sound too "Jewish" and was a favorite with Polish royalty. The man who accompanied Genia seemed to be the father and he often had to put his hand over the baby's mouth to stifle his wails. Apparently, someone denounced this man as a Jew, and he was deported, never to return. When the Russians liberated Warsaw and the surrounding towns in 1945, Claude could not walk since his bones were too fragile to support him, and his mother had to carry him in her arms. After the liberation, Genia returned to Warsaw to try to find any members of her family. None had survived. Since much of Warsaw was in ruins, a Jewish aid organization sent her to the city of Lodz to find housing. They told her that she could stay temporarily in a large apartment belonging to Jacob Hampel, who was living there alone.

Jacob Hampel was born on September 24, 1900 in Noworadomsk, Poland. He came from a strictly religious family, attended the heder and grew up in Konin. At the age of 16, he became involved in the Socialist Bund and later became active in local politics as a municipal counselor. He worked in the Yiddish press, doing layout for theatrical posters. Jacob married and was deported to Auschwitz with his wife and three children. His eldest son, Israël, was with him there until the very last months of the war. Jacob was injured while working in the mines near the camp of Jaworzno and remained there when the Nazis forced all the other inmates to evacuate the camp. His son departed with the other inmates and later died, probably from typhus, at Theresienstadt.

Genia and Jacob married in Ozorkow, Poland, on September 23, 1948, and Jacob adopted Claude. Genia then gave birth to a daughter Lydia the following year in Lodz. Claude attended a private Catholic school. When he was about seven-years-old, a much bigger boy accused him of having killed Christ. They got into a terrible fight, and Claude ended-up in the hospital with a ruptured liver. The Hampels then tried to emigrate to the United States or Canada, but could not obtain visas. The Communist government needed Jacob to work on the Yiddish press to show that it supported some form of Jewish culture. Finally, in 1957, they were allowed to leave for France. Claude and Lydia were sent to a Jewish post-war children's home run by the Bund in the town of Brunoy, east of Paris, for several years while their parents got settled. Though an excellent student, Claude decided to leave school before obtaining his baccalaureate so he could support his parents and sister. He became a typesetter at the Zionist Yiddish newspaper, Unser Wort, and later became a journalist. In 1998, the French Minister of Culture, Catherine Trautmann, honoured Claude Hampel's efforts to preserve the Yiddish language by naming him Chevalier des Arts et des Lettres. In 2000, he received the Cukierman Prize for his contribution to Yiddish culture.