A nurse cradles a Jewish infant who is being sheltered at the Clinique Edith Cavell in Brussels, Belgium. 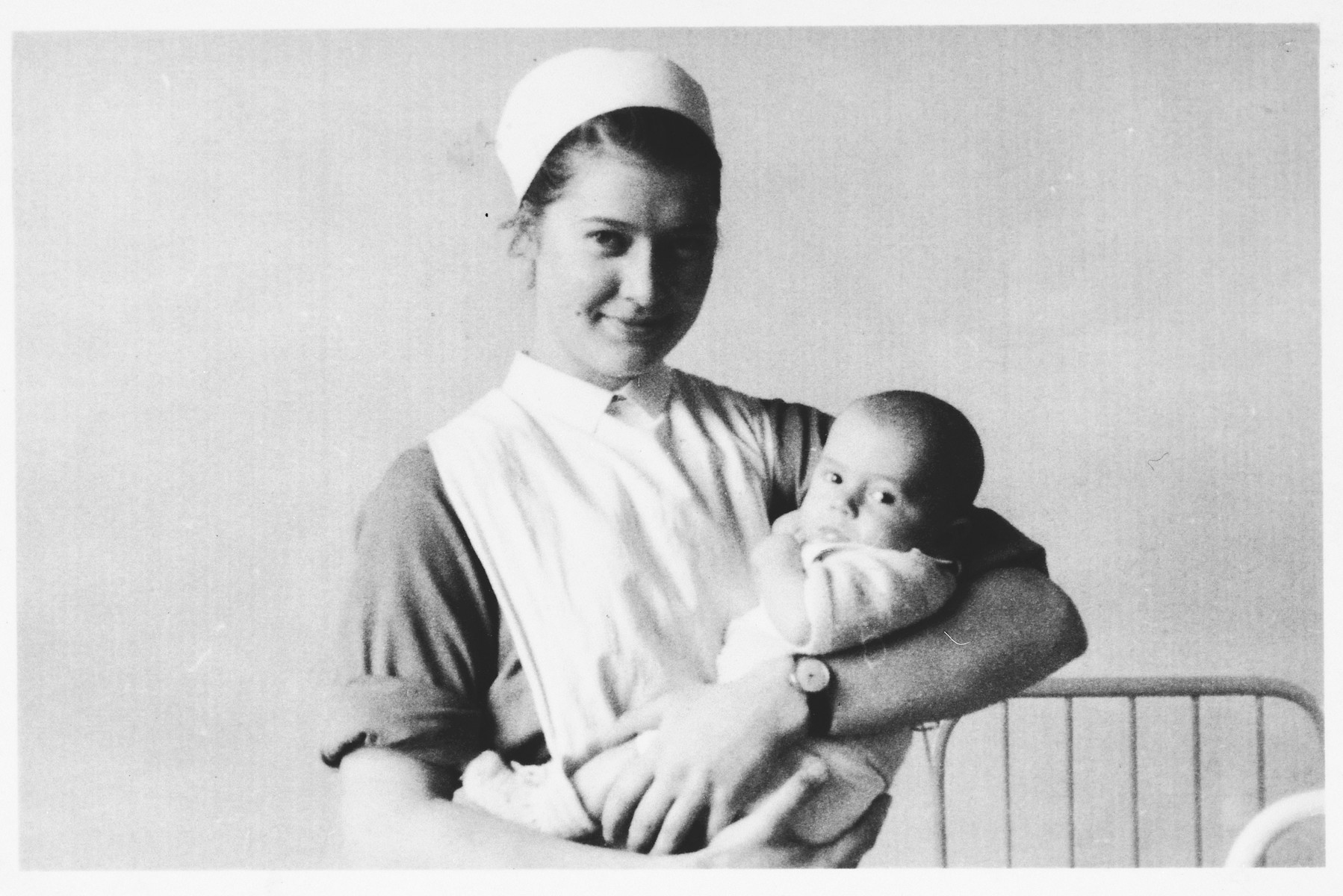 A nurse cradles a Jewish infant who is being sheltered at the Clinique Edith Cavell in Brussels, Belgium.

The infant is Georges Abramowicz.

Biography
Myriam Abramowicz is the daughter of Lea (Mesherowsky) and Mendel Abramowicz. She was born in Brussels on June 12, 1946. She had an older sister Jenny Ita, who died as an infant in 1938 and an older brother Georges (b. 1942). Myriam's father, who was born in Lodz, had immigrated to Palestine in the 1920s. After a short time he returned to Lodz and then moved to Belgium. Although he had trained as a cantor, he worked in Belgium in the diamond and fur trade. Lea Mesherowaky was born in Odessa, but fled with her family following the Russian Revolution. They went first to Zopot near the Baltic Sea and then to Danzig. In the 1930s Lea and her sister, Shura, lived briefly in Berlin before moving to Belgium. Lea and Mendel met in 1936 and married in 1937. The Abramowicz family remained in Brussels after the German occupation. When the first round-ups of Jews began in September 1942, they went into hiding immediately. One month later, Georges was born, on October 7, 1942. The Belgian doctor who delivered Georges, was a member of the resistance. While the mother and son were still in the hospital, the doctor contacted the AJB (Association des Juifs en Belgique), and they found a hiding place for Georges in the Clinique Edith Cavell. Lea left the hospital without her son and returned to her hiding place. The AJB later found a different hiding place for Georges in an institution some seventeen kilometers outside of Brussels. Lea and Mendel were able to visit him there on occasion. The AJB usually did not encourage Jews to go into hiding. However, Mendel's brother-in-law, Joseph (Oskar) Orbach worked both for the AJB and the CDJ (Comite Defense des Juifs) and was instrumental in finding hiding places for many children. During their period in hiding, Lea and Mendel were assisted by Oskar Ruyts and his wife Nana, a wealthy Belgian couple who owned a dry goods store. The Ruyts also hid some 22 other Jews in their store. For the next year and a half, Lea and Mendel stayed in their own apartment, but then moved between three different hiding places, which Oskar Ruyts helped find. On one occasion Lea returned to their apartment to find it had been searched by the Gestapo and sealed off. They had been targeted by Jacques, a notorious Jewish informer. Fortunately, neither Lea nor Mendel were at home at the time. Mendel was arrested a few times for curfew violations but always managed to escape. While in hiding, Mendel earned money converting gold bullion and trading in the black market. Immediately after the war, Lea and Mendel found Georges. Though he at first refused to go with his parents, they brought him back to Brussels with them. In 1948, Mendel endured his first heart attack, related in part to wartime stress. On November 25, 1955, the family immigrated to United States. Lea's sister Shura survived the war in a detention camp in Montpellier, where she met and married Lorenzo Teixidor, a Catalonian doctor, who was also interned there. Lea's mother, Tauba Mesherovsky, and brother, Bernard Mesherowsky, also survived in the same camp.