Prewar portrait of a Jewish family sitting at a table. 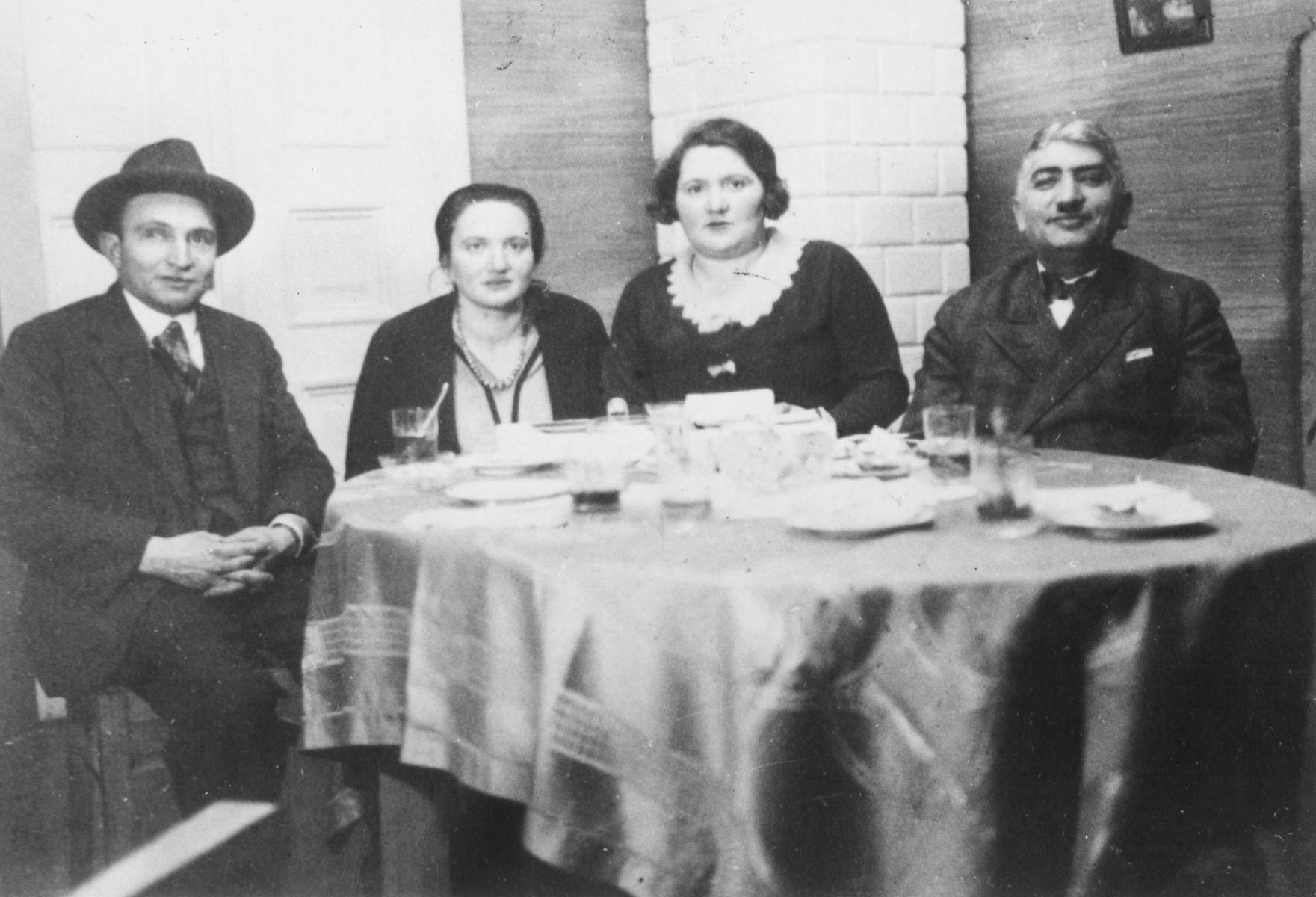 Prewar portrait of a Jewish family sitting at a table.

Pictured are the family of Henry Tovey (originally Choroszcz). From left to right are Natan Malczer (his uncle), Masia Majerczyk (his aunt), Rozia Choroszcz (his mother) and Nechemia Choroszcz (his father).

Biography
Bella Tovey (born Bela Jakubowicz) is the daughter of Aron Jakubowicz and Cyla nee Urbach Jakubowicz. Bela was born in Sosnowiec on September 18, 1926. Her father owned a knitting factory for children's and infant's wear. Bela had three younger siblings Pnina born 1928, Tusia born 1930 and Lulek born 1933. Bela attended elementary school and completed one year in the Jewish Polish gymnasium in Bedzin when the war broke out. Since Sosnowiec was located near the border, the Germans occupied their town by September 3. About two weeks later some Germans entered Bela's apartment house and rounded-up all the men including her father. He returned after a week having aged considerably. The Germans assigned a non-Jew to manage his factory but allowed him to continue to work there. Until the end of 1942 Sosnowiec was an open ghetto. The Bela's family stayed in their apartment, but they now had to share it with a Jewish family from Leipzig who had been deported to Poland. Shortly after the invasion, a German woman confiscated all their furniture and best personal belongings. However they managed to hold on to a few objects which they were able to barter for extra food on occasion. During the first year of the ghetto, Aron worked at his factory, and the children studied with a private tutor. By 1941 Bela had to work as well, but she still was able to continue her education. In March 1942 some Germans came to their house looking for Bela. They had a list of young people who they had selected to go to a labor camp in Germany. Bela's family was devastated. Her younger sister Pnina offered to go instead on the assumption that she would be released once they realized she was only 13 years old. However Pnina was sent to a concentration camp in Czechoslovakia. She remained there for three months until the Germans released her on account of her age. Soon afterwards in August, all the Jews in Sosnowiec were ordered to wear their best clothes and report to the stadium; those who failed to report would be shot. Bela's family waited there for a whole day in the extreme heat without food or water and then underwent a selection. Aron was sent to one side, and the rest of the family was herded into an apartment house. Bela's brother Lulek, who did not look Jewish, told the guard he was there by mistake and that his father was outside. The guard relented and released Lulek. Cyla and her three daughters remained behind. Then a militia man came and released Pnina. Aron used whatever connections he had and eventually succeeded in obtaining the release of the rest of the family. They escaped over the rooftops and eventually made their way home. Soon afterwards, they and the remaining Jews in Sosnowiec, were sent to Srodula, closed ghetto for Jews from Sosnowiec, Bedzin and Dabrowa. At the end of 1942, Pnina was deported to another labor camp, and Bela was sent away in late February 1943. Bela was taken to Graeben, a subcamp of Gross Rosen to work in a flax factory. There she worked 12 hour shifts, alternating between day and night. In the beginning she received monthly postcards from her family, but these soon stopped arriving. In autumn 1943 new workers arrived from Auschwitz; among them was a former neighbor from Sosnowiec. Bela asked her if she knew what happened to her family, and the woman reported that they all had been gassed and cremated. While in camp, Bela became inseparable from another woman, Frieda Wringer from Czechoslovakia, who became her camp sister. The two shared everything they had. In December 1944 as Soviet forces approached the camp, the women were sent on a death march to Bergen-Belsen. Conditions there were horrible. They had to stay close together on the floor of a barracks; many became ill and died. One day a woman entered the barracks looking for Frieda's older sister who she said had saved her life in Auschwitz. She wanted to repay the favor and offered to save Frieda. Frieda left the barracks to become a runner for the hospital; she received more food which she shared with Bela whenever possible. Frieda eventually managed to get Bela into a barracks with bunks and helped find her a job sorting confiscated belongings. Bela later became extremely ill with both typhus and typhoid. She weighed only 70 pounds when the British liberated her on April 15, 1945. Bela remained in Bergen-Belsen to recuperate until November when she moved to the Zeilsheim displaced persons' camp. Eventually her sister Pnina, the only other member of her family to survive, found her through the help of the Red Cross. She had been liberated by Russians. Pnina had also made contact with an uncle in New York who sponsored Bela's immigration. Pnina chose instead to immigrate to Palestine. In May 1946 Bela immigrated to the United States on board the Marine Fletcher. Also on the boat was a fellow survivor, Henry Tovey (originally Henryk Choroszcz from Lodz), who she married in New York on January 23, 1949.