Young people eat in the dining room at the Lido Di Roma hachshara. 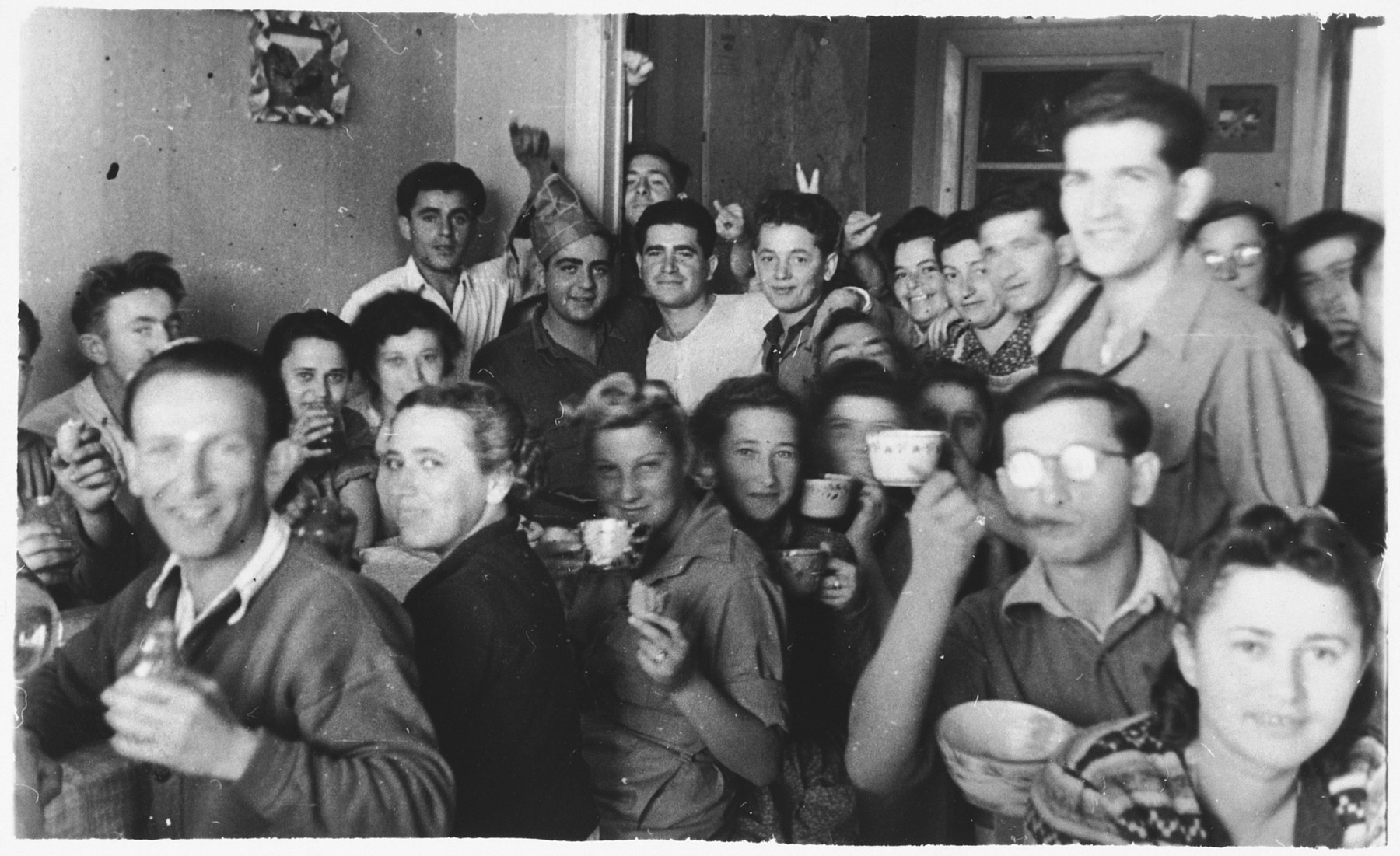 Young people eat in the dining room at the Lido Di Roma hachshara.

Biography
Belcia Weissman (born Belcia Pinkus) is the daughter of Avram and Chaja Perlmutter Pinkus. She was born in 1928 in Losice where her father owned a small stationery store. Her father, however, was an intellectual who preferred reading to shop keeping, so barely eked out a living. Belcia was the youngest of four children. She had an older married sister Manya, a brother Yankel who died in childbirth and a brother Oskar. The family lived in the same building as her maternal grandfather where her mother's sister, Henia Losice, and another uncle also had apartments. Belcia was only a few months apart in age from her cousin Berl Losice, and the two grew up like twins. Following the German invasion of 1939, Oskar was assigned to forced labor, working first in Schupo headquarters and then on various construction projects. On December 1, 1941 a ghetto surrounded by barbed wire was established in Losice. he Germans announced that they needed skilled craftsmen who should report with the tools of their trade. Manya's husband, Ignatz, was among those who signed up. Rather than being brought to a worksite, the men were taken to a concentration camp where they perished. Eight months later, on August 22, 1942, most of the ghetto's Jews were deported to Treblinka. The Pinkus and Losice families escaped deportation by hiding for three days in a cramped attic. After the liquidation of Losice, they went by foot to Konstatynow where they had a few relatives. When they heard there would be a deportation in Konstantynow, they decided to return to Losice on September 24. Upon their return, they settled in a new, smaller ghetto consisting of five buildings that housed approximately fifty other Jews who temporarily had escaped deportation. They were tasked with dismantling the old ghetto. For a brief time, their material fortunes improved as they could salvage extra food and clothing from the abandoned buildings. With some of this money the family purchased a false identification card for Manya in the hope she could escape. After two months, they began to hear rumors of impending new deportations. Right before, on November 18, 1942, Motl, a friend and distant cousin, told them that his Polish friend Wacek had found a hiding place on the farm of Stanislaw Szczerbicki in the village of Koszelowska. In small groups Wacek escorted members of the Pinkus and Losice families to the farm. Manya had found work in same village posing as a Pole, and the two youngest Losice children were placed in separate hiding places. Szczerbicki hid the family in a hole in the floor of his pigsty 5 feet by 7 feet, and 3 feet deep covered by a roof of manure. He later widened it to accommodate a small sleeping area and benches. For the next two years, the family remained underground, emerging for fresh air only for short intervals at night. They kept occupied by playing chess and cards,and telling stories; Oskar also kept a diary during their entire time in hiding. [later entitled, "House of Ashes", and published by World Publishing Co., Cleveland, 1964] Wacek visited them periodically and brought them news and provisions. After seven months, Belcia's younger cousin, Rivke Losice, joined them as her first hiding place was no longer safe. Belcia left the hiding place only once when she accompanied her mother who was asked to help a Jewish woman in hiding in the forest with her labor and delivery. One night Manya visited them to tell them she had been denounced and had come to say goodbye. She escaped and went to Miedzyrzec. For a while the family had brief communications of her whereabouts and maintained hope she would survive, but after the war they received confirmation that she had been evacuated from the ghetto and sent to Majdanek. Belcia and her family remained hidden until the Soviet army captured the area in the summer of 1944. They returned to Losice to learn that only sixteen Jews had survived. Soon thereafter, members of the Polish Home Army began hunting down surviving Jews. They murdered one in a postwar pogrom in the neighboring town of Mordy. They also killed Wacek as punishment for his role in helping Jews. The remaining Jews felt it was no longer safe to remain in Losice and fled to Lodz where large numbers of surviving Jews were gathering. In April 1945, Belcia, along with cousin Berl, fled with the Bricha in the hopes of immigrating to Palestine. They traveled to Romania, Hungary, and Austria and came eventually to Italy where they joined the Shomer Hatzair kibbutz, Kibbutz Behazit in Lido di Roma. Oskar joined them a few months later. While in the kibbutz, Belcia met Benek Weissman, a survivor from Kroschenko. Benek was assisting the Bricha bring children from Modena to Napoli for eventual transport to Palestine. Belcia's parents eventually also came to Italy. When Lido di Roma was disbanded in 1946, Belcia went to live in Villa Selva near Florence. After waiting two years for permission to immigrate to Palestine, she and Benek married in Florence and immigrated to the United States in 1947.