Group portrait of Jewish girls and teenagers in the Orthodox orphanage in Dinslaken, Germany prior to Kristallnacht 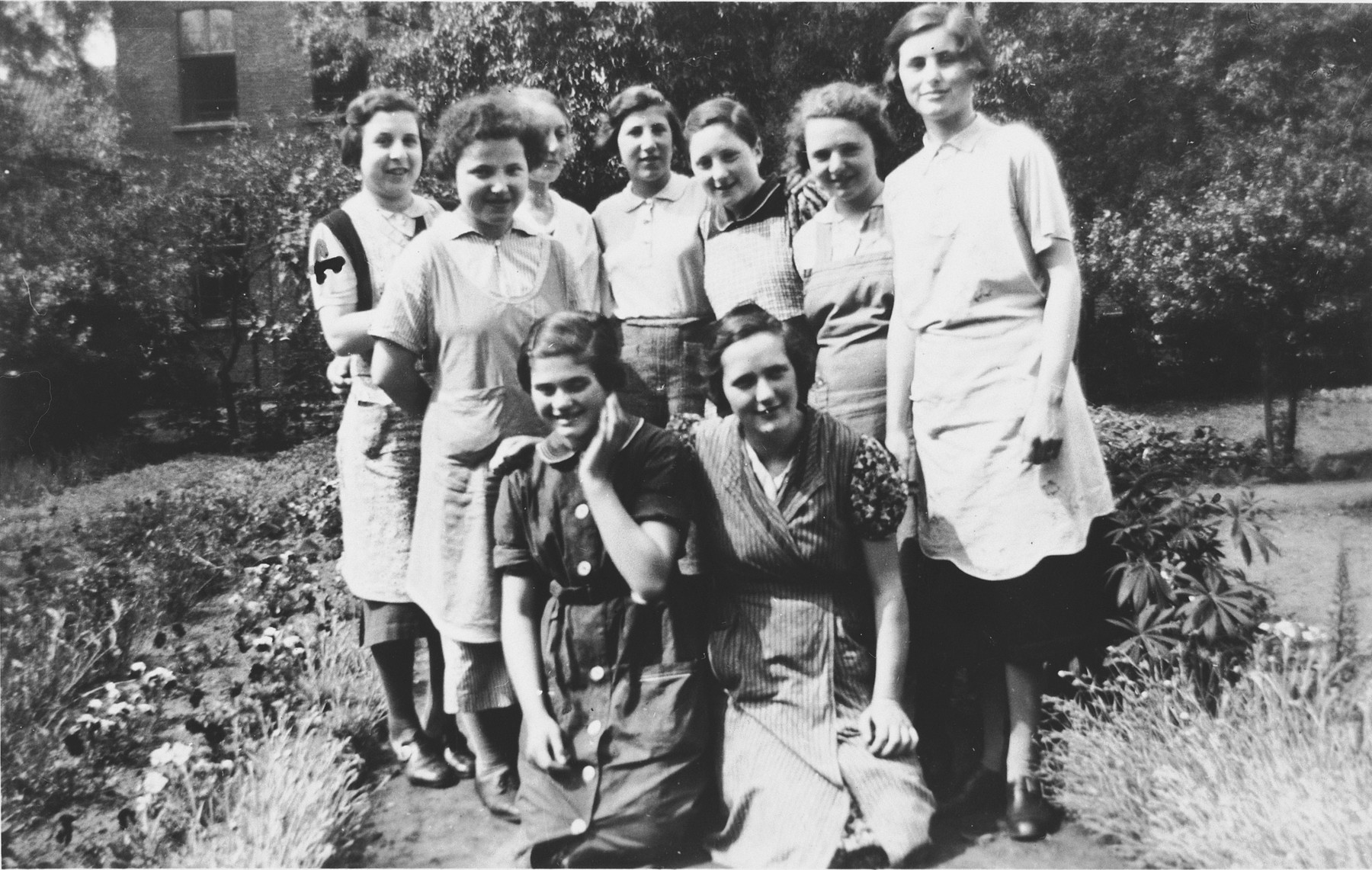 Group portrait of Jewish girls and teenagers in the Orthodox orphanage in Dinslaken, Germany prior to Kristallnacht

Pictured standing on the far right is Ruth Herz.

Biography
Ruth Goldschmidt (born Ruth Herz) is the daughter of Eugene Herz and Lilly Weinberg Herz. She was born in Holzheim in 1922 where her father taught math and science in high school. Of the approximately 1000 inhabitants of the town, only six or seven families were Jewish. Despite that, the Herz's maintained a religiously observant life and attended a small synagogue, albeit with neither a rabbi nor a cantor. Ruth attended a German public school, and prior to Hitler's rise to power, had many non-Jewish friends. After Ruth's father passed away from disease in 1932, and Ruth and her mother moved in with Lilly's father who ran a small grocery. Once the Nuremberg laws were passed, housewives no longer wanted a Jewish man bringing deliveries to their homes, so Ruth began delivering groceries for her grandfather. By 1938 her grandfather only sold to Jewish customers. Ruth was the only Jewish child in her school, and the other children, who belonged to the Hitler Youth, harassed her constantly. Ruth managed to complete 8th grade with the assistance of a teacher who risked his own career to help her. However, since it became impossible for Jewish children to continue their education, Ruth moved to an orthodox Jewish orphanage in Dinskalen in May 1938. She studied many subjects including cooking, child psychology, English and Hebrew in preparation for her immigration to either Palestine or the United States. Ruth only stayed there for half a year, because the orphanage was destroyed in November 1938 during Kristallnacht. Her grandfather's home was also destroyed, but some Christian neighbors helped him repair part of it to make it temporarily livable. Soon thereafter, Ruth left for Brussels on a Kindertransport. For the next few years her only contact with her mother and grandfather came through censored letters. In 1939 her mother and grandfather had to sell their house in Holzheim and move to Mainz. Lilly was deported to concentration camp in March 1942, where she perished. Ruth's grandfather died soon thereafter from old age, disease and starvation. Ruth stayed in Brussels until 1940 where she worked as a mother's helper for a Christian family. She had to work from dawn until late at night doing the family's housework, yard-work and childcare. After the German invasion of Belgium, the family escaped Brussels leaving Ruth behind. She joined a group of Jewish children and teenagers with German or Austrian background and fled by cattle car to Southern France. Local farmers provided the children with food and shelter, but French authorities registered everyone of German origin and interned those over 18 years of age in camps. Ruth was deported to Gurs. The American Friends and the Swiss Red Cross supported children under the age of 18 and maintained several children's homes in France. They arranged for Ruth's release in October 1940. Following her release from camp, Ruth worked under the auspices of the Swiss Red Cross in various children's homes, including Chateau La Hille. After the Italians surrender to the Allies in September 1943, the Germans seized control of the Italian zone and began a manhunt for Jews in the region. The mayor of a small village in the French Alps provided Ruth with fake identity papers, and Swiss nurses and teachers in a children's home hid her until after France was liberated in August 1944. After the war, the home where she worked employed German Prisoners of War to do heavy labor. By chance, one of the POWs happened to be son of the Protestant minister from Holzheim. Ruth agreed to send letters to his widowed mother in Germany who put her in touch with her former teacher. She helped get him reinstated in the school system. Eventually Ruth got in touch with her mother's cousins in Scotland who contacted other relatives in the United States. Ruth immigrated to the States in November 1947 and worked as a nurse. In 1950 married Arthur Goldschmidt, another immigrant from Germany.