Leo Holzer, chief of the Theresienstadt fire brigade, poses next to a fire truck marked Terezin on the hood. 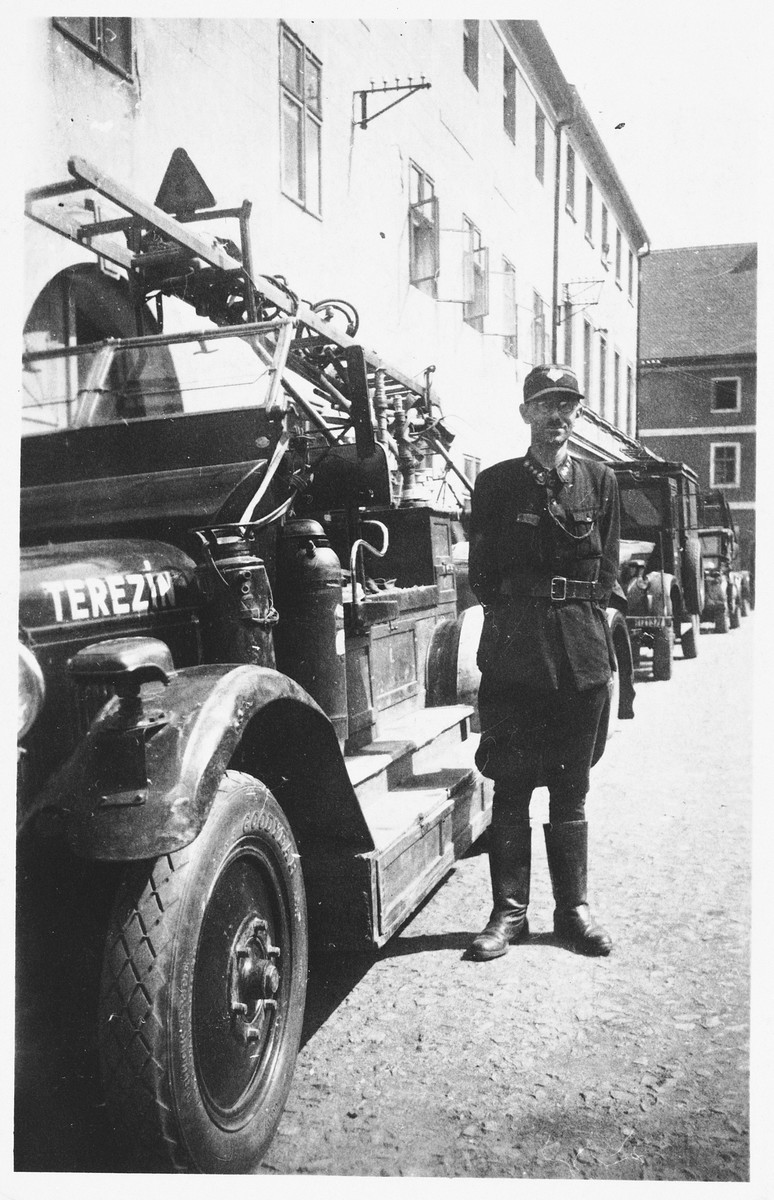 Leo Holzer, chief of the Theresienstadt fire brigade, poses next to a fire truck marked Terezin on the hood.

The photo was sent Pavel Torsch, his former colleague in the fire brigade. The inscription on the back of the photograph reads: "To my dear friend and companion of my youth with heartfelt wishes! [signature unclear], 27.IX.1945."

Biography
Pavel Thorsch was the son of Jakob and Ida (Winter) Thorsch. He was born December 15, 1902 in Brno, Moravia. His father was the technical manager of a sugar beet factory in nearby Tovacov. Pavel had one older brother, Friedrich. In 1920 Pavel moved to Vienna, where he went to work for the Creditanstaltverein, a leading Austrian bank. His brother also lived in Vienna and worked at the same bank. Pavel's parents joined them in the early 1920s in order to seek treatment for an illness Jakob had contracted. He died in Vienna in 1926. That same year Pavel married an Austrian woman named Margarethe Kopecky. The Thorsch's remained in Vienna until the Anschluss, at which time Pavel, Margarethe and Ida fled to Prague. Friedrich was arrested and sent to Dachau. But he secured an early release and managed to get to England, and from there, to the US. In Prague, Pavel went to work in an administrative post for the Jewish community. His mother was deported in 1942 to Theresienstadt, and from there to Treblinka, where she perished. Having a non-Jewish wife protected Pavel from deportation until the last months of the war. But in February 1945 he, too, was sent to Theresienstadt, where he became a member of the ghetto fire brigade. During his internment he met and fell in love with Annemarie (Pollack/Pohnert) Nathan, a deportee from Prague. Annemarie came from a Jewish family that had converted to Christianity during her youth (at which time they had changed their name from Pollack to Pohnert). In 1937 she had married Franta Nathan. Despite her conversion, Annemarie was deported to Theresienstadt in December 1941. The rest of her family followed later. After the liberation in May 1945, Pavel and Annemarie returned to Prague. After Pavel learned that his wife had committed suicide, he and Annemarie decided to marry, and Annemarie divorced Franta. In 1946 they gave birth to a daughter, Daniela. The young family left Czechoslovakia for Australia in June 1948. Upon their arrival they changed their name to Torsh. Pavel died in Sydney in 1958.

Leo Holzer was the chief of the fire brigade in the Theresienstadt ghetto/concentration camp from 1941 to 1945. He was born in Kobersdorf, Austria, and was trained as an engineer. In the interwar period Holzer served in several volunteer fire departments, including in Misslitz, Unter Radelberg and Neu-Hohlau. In 1936 he moved to Czechoslovakia. Following the occupation, he moved further inland, but in 1941 he was forced to register with the authorities and soon deported to Theresienstadt. Holzer survived, and after the war worked as a factory manager in several locations in Czechoslovakia. He continued to be involved in firefighting throughout his life.