Visitors pose with glasses of mineral water in front of a hotel at the Bad Hall resort. 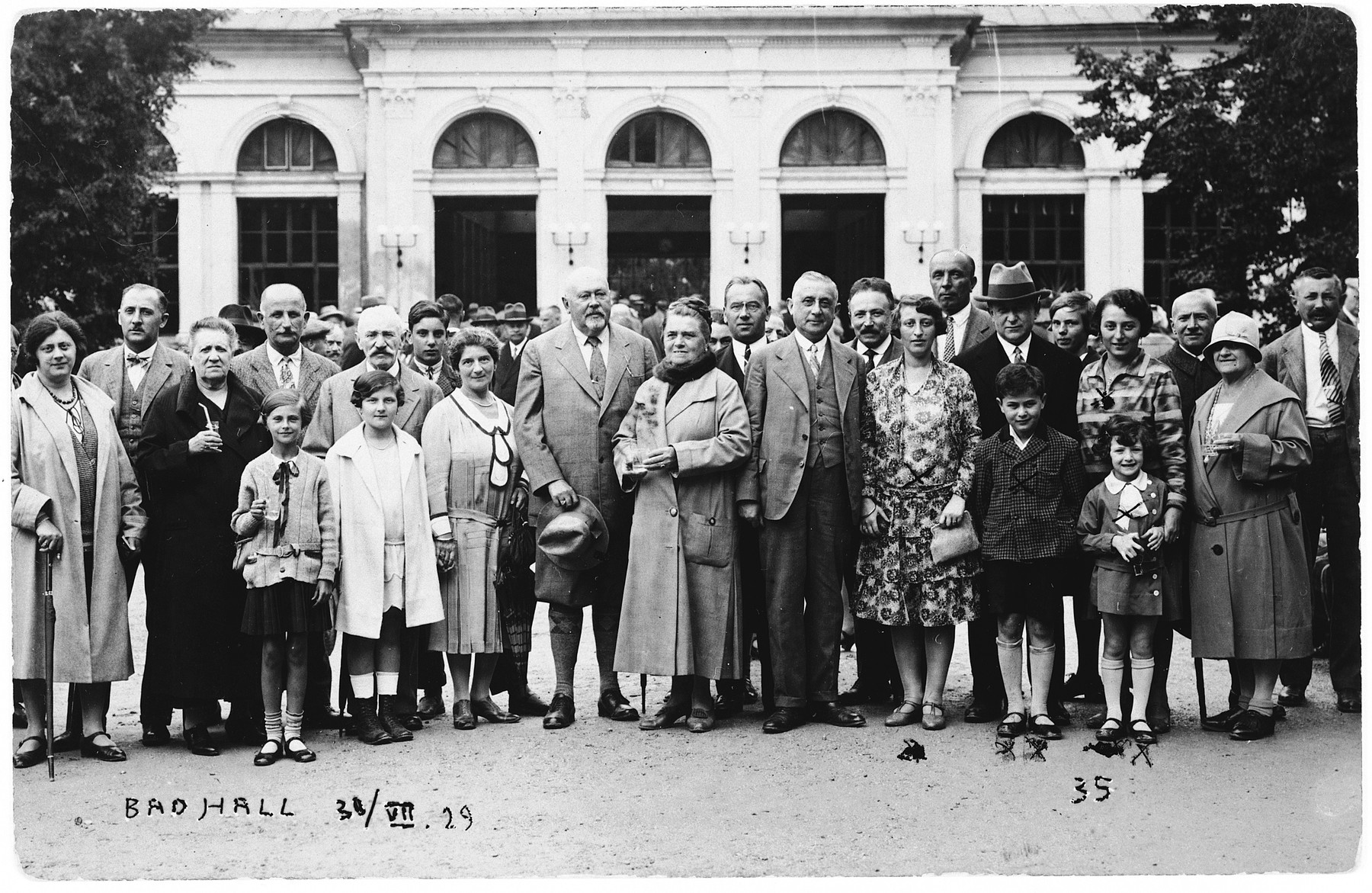 Visitors pose with glasses of mineral water in front of a hotel at the Bad Hall resort.

Among those pictured are the Fuchs family.

Edgar Krasa is the son of Alois and Elsa Krasa. He was born in 1924 in Karlsbad, Czechoslovakia, where his father worked as a salesman. In 1933 his family moved to Prague. In the late 1930s after the institution of anti-Semitic legislation, which interrupted his formal education, Edgar needed to learn a trade. At his aunt's suggestion, he became an apprentice chef, reasoning that with such a trade he would never go hungry. Edgar remained in Prague after the outbreak of World War II. In 1941 after he was dismissed from his job, Edgar went to work as a cook for a refugee shelter for Polish Jews that was run by Karl Schliesser. Later that year, Schliesser was appointed head of the economics section of the newly established Theresienstadt ghetto, and he requested that Edgar join him there to organize the kitchens. In return, Edgar was promised that his parents would be exempt from deportation to the east. (In fact, though Edgar's parents were ultimately sent to Theresienstadt, they were not deported to Auschwitz.) Edgar joined Aufbaukommando (AK1), the initial group of 342 men who came to Theresienstadt on November 24, 1941 to renovate the garrison. (The first deportees arrived six days later.) He assumed responsibility for setting up the two kitchens and training workers to staff them. Edgar designed menus based on the few ingredients available: ersatz coffee, potatoes, flour and a synthetic soup mix. He roomed with Raphael Schaechter, a pianist and choral conductor, who kept up the morale of the other workers by leading them in Czech choral music in the evenings. During his imprisonment in Theresienstadt, Schaechter conducted several operas and numerous performances of Verdi's Requiem. He selected the mass for political reasons, because of its discussion of a final judgment and accounting for sins. Krasa participated in all sixteen performances of the mass, singing bass in the chorus. Krasa also became friendly with several of the artists in the ghetto, including Leo Haas and Fritz Taussig (Fritta), to whom he slipped extra rations in exchange for their drawings. On September 24, 1944 Schleisser was deported to Auschwitz on a transport of 2,500 skilled and able-bodied Jews. Krasa was sent the following week on October 1. From Auschwitz, Krasa was sent to the Gleiwitz labor camp, where he worked as a welder. When the camp was evacuated on January 19, 1945, Krasa was put on a forced march, from which he escaped three days later. He hid in a ditch, and the following day was liberated by Soviet troops. On May 1 Edgar returned to Prague and then proceeded to Theresienstadt, where he was reunited with his parents. Together they went back to Prague, where Edgar met and later married Hana Fuchs, a fellow survivor from Prague. After the establishment of the State of Israel, Edgar served as the chef at the Israeli embassy in Prague for two years. In 1950 he and his wife left Czechoslovakia illegally and immigrated to Israel.