Members of various Jewish welfare organizations operating in Lisbon to rescue European Jewish refugees, are seated around a banquet table at a hotel in Lisbon. 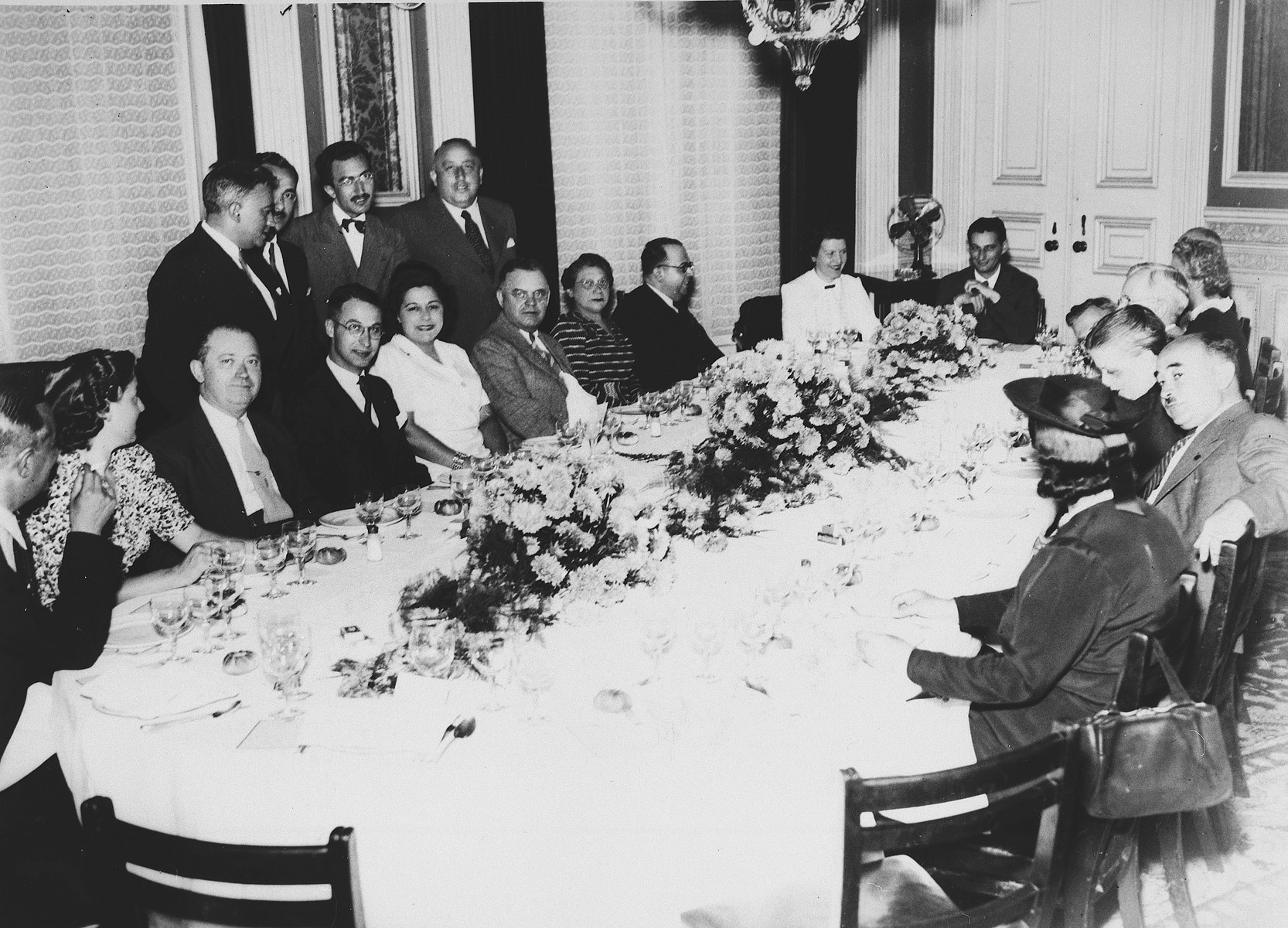 Members of various Jewish welfare organizations operating in Lisbon to rescue European Jewish refugees, are seated around a banquet table at a hotel in Lisbon.

Among those pictured are Joseph Schwartz, Chairman of the European executive council of the American Joint Distribution Committee (at the head of the table) and Albert Nussbaum (standing between the windows on the right).

Joseph J. Schwartz (1899-1975), American rabbi and communal leader, who from 1940 to 1949 served as chief of European operations for the American Joint Distribution Committee. Born in the Ukraine, Schwarz immigrated to the US as a child in 1907. He studied for the rabbinate at the Rabbi Isaac Elchanan Theological Seminary in New York and served as a congregational rabbi in New York from 1922 to 1925. Two years later he completed a Ph.D. at Yale in oriental studies and taught at universities in Egypt and the US for several years. In 1933 Schwartz became a social worker for the Brooklyn Jewish Federation, and in 1939, joined the staff of the JDC as an adjunct secretary. Soon after coming to the JDC, Schwartz was sent to Paris to be deputy director for European operations under Morris Troper. Just prior to the fall of Paris in June 1940 Troper and Schwartz transferred JDC headquarters to Lisbon. Troper returned to the US shortly afterwards and left Schwartz in charge of the European aid and rescue operations. Schwarz proceeded to reserve every available passenger berth on outgoing ships to insure that Jewish refugees arriving in Lisbon with visas for the U.S. or Latin America could travel to their destinations. He also sent relief parcels to Jews in French internment camps and channeled funds to Jewish relief and rescue organizations in France, as well as to the armed Jewish underground. Working in close cooperation with Saly Mayer, JDC representative in Switzerland, Schwarz provided funding which Mayer transmitted to Jewish communities throughout occupied Europe. Schwartz was also responsible for supplying funds for relief and resistance to Jews in the ghettos in Poland, for the shipment of relief parcels to Jewish refugees in the Soviet interior, for financing Swedish diplomat Raoul Wallenberg in Budapest, for underwriting illegal Jewish immigration to Palestine, and for providing money for Jewish institutions in Palestine. After the liberation Schwartz moved JDC headquarters back to Paris and began to send JDC teams to the newly established displaced persons camps in Germany, Austria and Italy. He negotiated agreements with the new governments of Eastern Europe to send JDC workers to their countries and channeled large sums to sustain the survivors and reestablish businesses and community institutions. Schwartz also played a key role in facilitating the Bricha, the illegal movement of Jewish refugees from eastern to western and southern Europe in the period between 1945 and 1948. After the closure of most of the DP camps Schwartz returned to the U.S., where in 1950 he became chairman of the United Jewish Appeal. From 1955 until his retirement in 1970 he served as executive vice president of the State of Israel Bonds organization.