Identification card issued to child survivor, Joseph Szwarcberg, by the American military government after his liberation from Buchenwald. 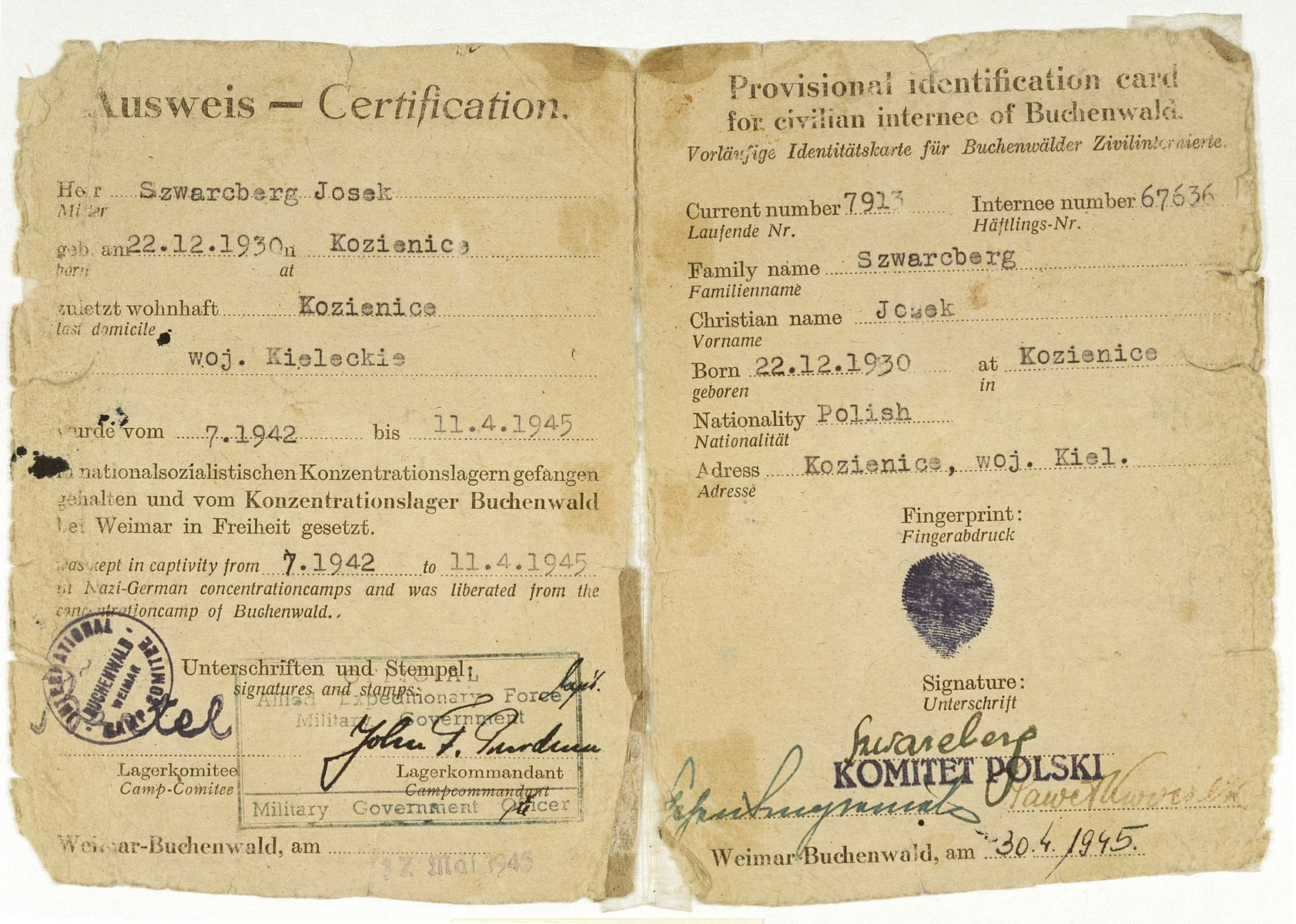 Identification card issued to child survivor, Joseph Szwarcberg, by the American military government after his liberation from Buchenwald.

[Sources: Hemmendinger, Judith and Krell, Robert. "The Children of Buchenwald." Gefen Publishers, 2000; Grobman, Alex. "Rekindling the Flame." Wayne State University Press, 1993; Hazan, Katy, "Chronologie de l'histoire de l'OSE L'action de l'OSE apres la guerre."
Biography
Joseph (Josek) Szwarcberg is the son of Mordechai Dawid and Mala Szwarcberg. He was born December 22, 1930 in Kozienice, Poland, where his father owned a wholesale leather goods business. Joseph had five older siblings: Sara (Sabina), Benjamin, Raize, Henia, and Abram. Joseph had a wonderful voice, and his father, who served on the religious court, often brought him to the synagogue where he sang solos. After the German occupation of Kozienice, the Szwarcbergs were forced into a ghetto. Joseph was responsible for finding food for his family while his father and brothers hid in their attic to evade the round-ups for forced labor. Joseph's mother died while in the ghetto. In August 1942 he and his brothers were sent to a nearby labor camp in Wolka. There, Joseph witnessed a camp guard shoot and kill his brother Benjamin. A few months later, on November 11, 1942, he was taken to Skarzysko. Joseph was only twelve years old at the time and had built up the soles of his shoes so that he would look taller and older. He was one of approximately sixty children who had illegally come into the camp. A female prisoner who had smuggled her diamonds into the camp, used them to bribe a guard to allow the children to stay. Joseph and ten other children were allowed to stay, but the other fifty were taken away and shot. Of the ten who remained, only five survived the war. Joseph earned extra food by singing for the Polish prisoners. He worked in a warehouse that supplied the raw materials for the ammunition factory and had to carry heavy loads that he could barely lift. Joseph subsequently came down with typhus, but had to continue to work despite his fever and weakness. One day Joseph and fourteen other prisoners were lined-up against a wall by a sadistic guard, who declared his intention to kill them. He then proceeded to fire his weapon above their heads, deliberately missing and laughing at the trick he had performed on the prisoners. In August 1944, Josef was transferred to Buchenwald. One day he spotted some new arrivals from Auschwitz. He ran up to one man convinced that he was his father only to be sorely disappointed that it was not. He later learned that his father had been shot during the death march from Auschwitz. Joseph was liberated at the age of fourteen by the American army on April 11, 1945. A few days later he was taken into care by the Red Cross. That June, Joseph joined a transport of 427 child survivors of Buchenwald to France. He remained under the care of the OSE (Oeuvre de Secours aux Enfants) until he immigrated to Australia three years later to join his sisters who had also survived.