Studio portrait of a Jewish woman with two of her children. 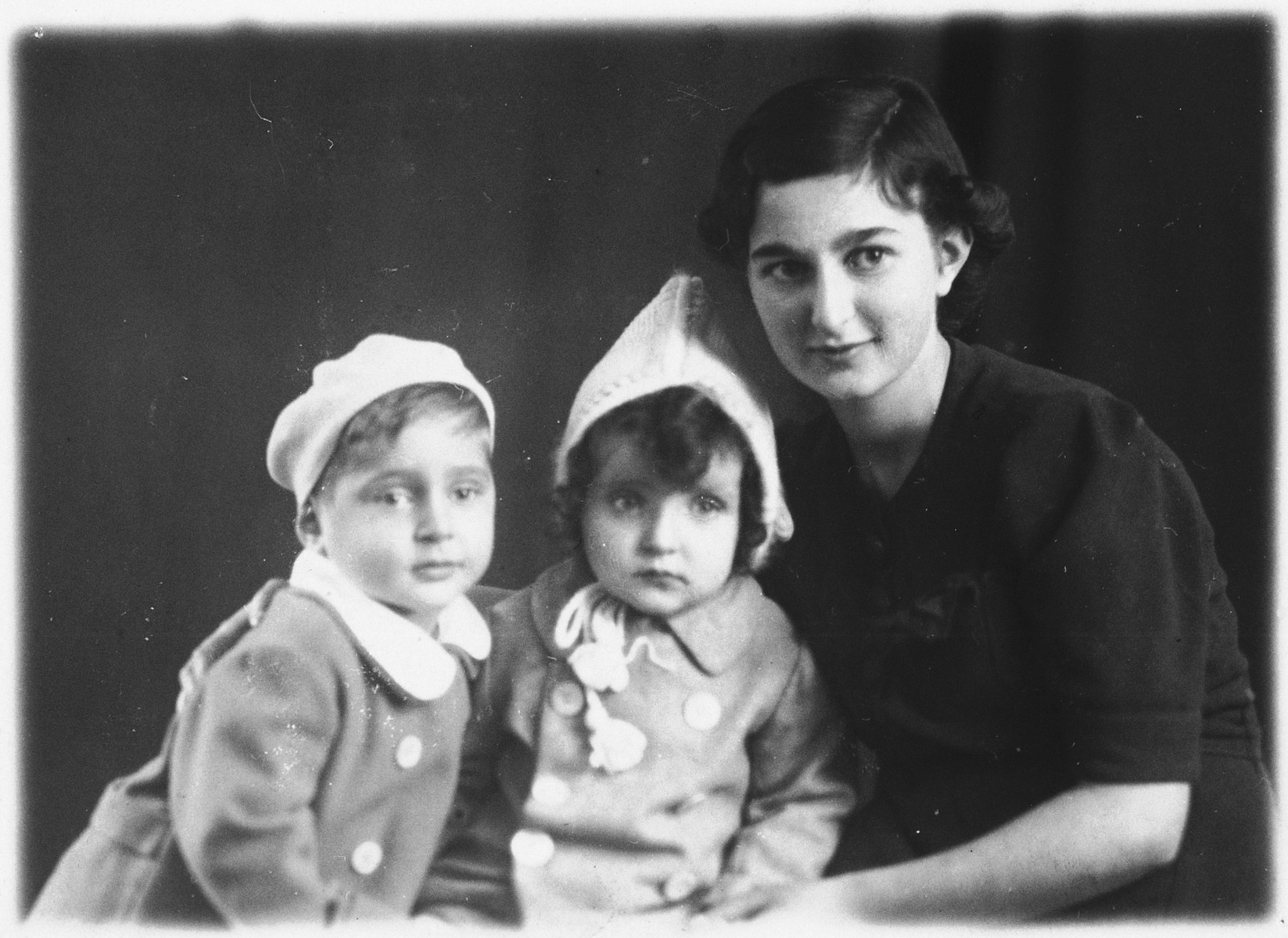 Studio portrait of a Jewish woman with two of her children.

Pictured are Mathilde Hirsch and her two youngest children, Werner and Rosalene.

Biography
Benjamin Hirsch is the son of Dr. Hermann and Mathilde (Auerbach) Hirsch. He was born September 19, 1932 in Frankfurt-am-Main, where his father was a dentist and a lay leader of the Jewish community. Benjamin was raised in an Orthodox home. He had six siblings: Flora (b. 1925) Sarah, Anselme (b. 1927), Jacob (b. 1931), Werner (b. 1936) and Roselene (b. 1938). When Benjamin was six-years-old, SS men broke into their home on the night of Kristallnacht demanding to see Dr. Hirsch. When Mathilde said that he wasn't home, the man pulled out a gun and threatened to kill each of the children unless he appeared. At that moment, Hermann came out from a hiding place and gave himself up. He was sent to Buchenwald, and Benjamin never saw him again. After the arrest, Mathilde resolved to do whatever she could to save her children. She learned that a Kindertransport was being formed to send children to France, and she enrolled her five oldest children. She decided that the two youngest children were too young to travel and would remain with her. Benjamin and his siblings left for Paris in early December 1938. Flora, who at thirteen was the oldest of the children, worked as an aide, helping to look after the younger ones. Upon their arrival, Flora and Sarah went to live with their uncle, Gusti. Anselme and Jacob went to a religious boarding school, and Benjamin went to the home of Nathan and Helen Samuels. After the German invasion of France, the children were evacuated from Paris. The OSE (Oeuvre de Secours aux Enfants) first sent Benjamin to the children's home, Villa Helvetia, in Montmorency and then to Masgelier. Meanwhile, in September 1940, HICEM (the Jewish overseas emigration association) began making plans to facilitate the immigration of Jewish children to the United States on special State Department visas. In May 1941 the OSE sent Benjamin to Marseilles to meet his brothers for the first children's convoy. Shortly before the children were about to leave for Spain, Benjamin came down with a severe stomach ache, which was diagnosed as an appendicitis. Anselme and Jacob went on ahead, and Benjamin, who by now was feeling better, went to join his sisters at the Chateau de Morrelles to wait for the next transport. In August, Flora, Sarah and Benjamin took a bus to Marseilles to begin their journey to America. From there they took a train to Spain and then Lisbon where they boarded the SS Mouzinho for the U.S.. Their mother had a cousin, Rabbi Selig Auerbach, who was a rabbi in Rome, Georgia. Though he did not have the resources to care for five more children, he offered to visit and assist them if they found foster homes nearby. Therefore the Hebrew Orphan's Home in Atlanta sponsored the Hirsch children and found homes for all of them in the city. After the war, Benjamin learned that his father had returned home from Buchenwald in early 1939 only to be rearrested a few years later. He was sent to Sachsenhausen and then transferred to Auschwitz, where he died on November 5, 1942. His mother and two younger siblings, Werner and Rosalene, were deported to their death in Auschwitz in the autumn of 1943.