Jewish DP youth are gathered around a table with cake and wine in the Gabersee DP camp. 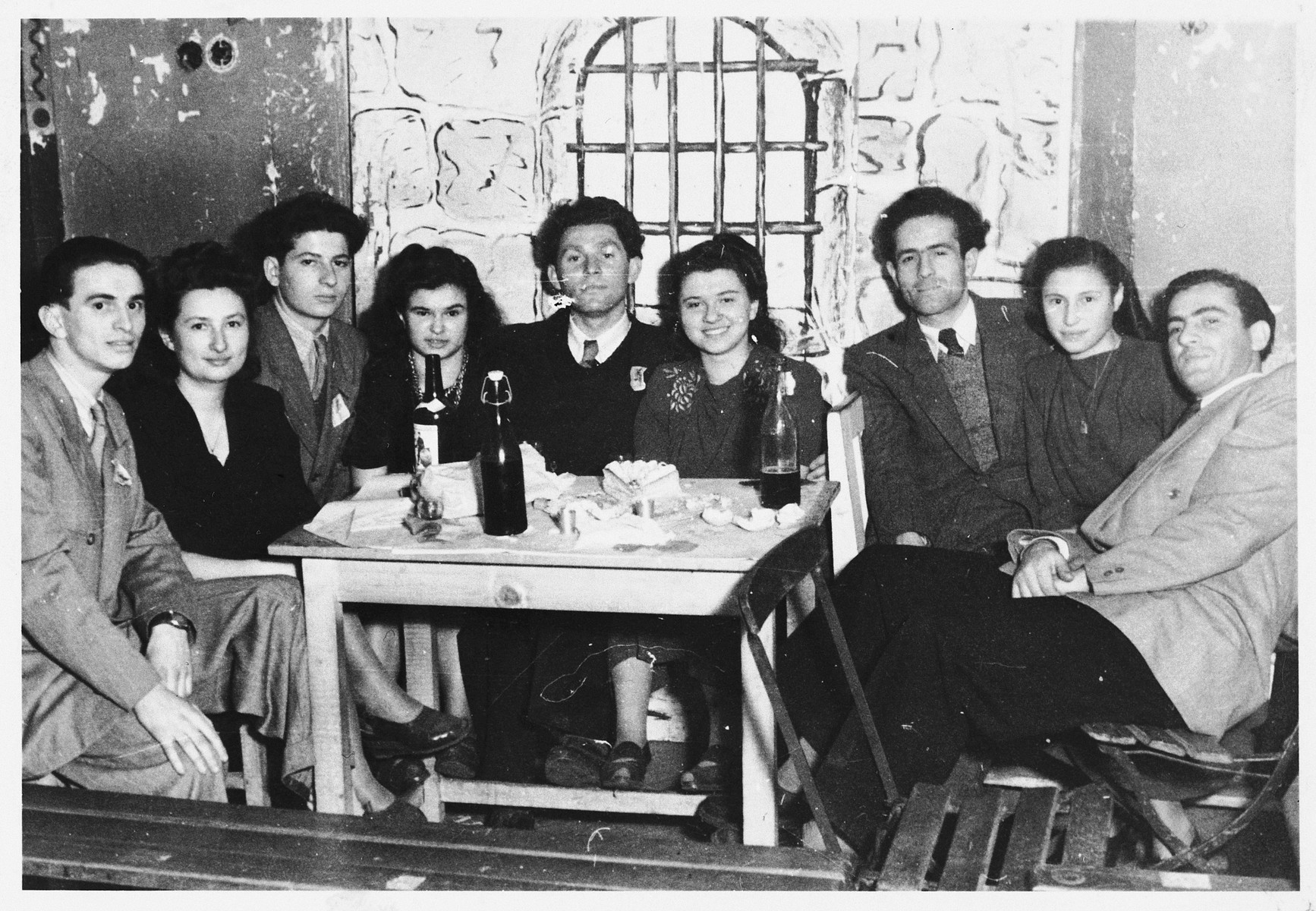 Jewish DP youth are gathered around a table with cake and wine in the Gabersee DP camp.

Among those pictured are David Wincygster (third from the right), Helen Spielman (fourth from the left), and her brother Arthur Spielman (far left).

Henia Spielman (now Helen Winchester) is the daughter of Simon and Czarna (Mosinger) Spielman. She was born January 22, 1931in Krakow. Her older brother, Arthur, was born December 10, 1928, and her younger sister, Bronia (now Barbara Firestone), was born February 14, 1939. Henia attended public school and was about to being the third grade when the war broke out in September 1939. In March 1941 the family was forced into the Krakow ghetto, but later, when it was reduced in size, they were able to escape to the suburb of Wola Duchacka, with the help of a Christian acquaintance. The Spielmans stayed in an isolated farmhouse. After about nine months they decided to flee to Hungary via Czechoslovakia. Simon and Czarna took Bronia, and the two older children went separately with smugglers. At the Hungarian border Henia and Arthur were caught and thrown into jail. Henia wrote her name in her cell in the hope of communicating her whereabouts to her family. From the jail she was transferred to a Jewish orphanage, where by coincidence she met her cousin Miriam. Miriam told her that Arthur had been brought there as well. Henia's parents also were arrested at the border. By chance, Czarna was thrown into the same cell as Henia had been in and discovered her daughter's name. After their release, Czarna and Simon managed to obtain false papers under the name of Nieczkowski and moved to Miskolc. There, they befriended a Polish officer and told him about their children's fate. He offered to help get them out of the orphanage, but could do so only one at a time. Miriam left first followed by Arthur. By the time it was Henia's turn, the Germans had occupied Hungary, and the opportunity for escape had been closed off. In April 1944, on the day the Jewish population of Miskolc was deported, the Polish officer found Henia outside and told her to follow him. They hid in a restaurant belonging to a friend for the day, and early the next morning reached Henia's parents' home. The Spielmans remained in Miskolc until their liberation on December 3, 1944. During their period in hiding, the family went to church and hung a large cross in their house, but Simon secretly put on tefillin (phylacteries) and prayed as a Jew every day. After the war the family went to Budapest and made contact with Simon's two sisters in the United States. They then moved to Bratislava, where they stayed for six months before making their way to Germany. They lived in the Gabersee DP camp for three years until they were able to immigrate to the U.S. in May 1949. Helen married David Winchester, whom she met in Gabersee, on March 17, 1951.