A young Jewish girl poses with the couple who hid her during the German occupation of Holland, prior to leaving their home after the war. 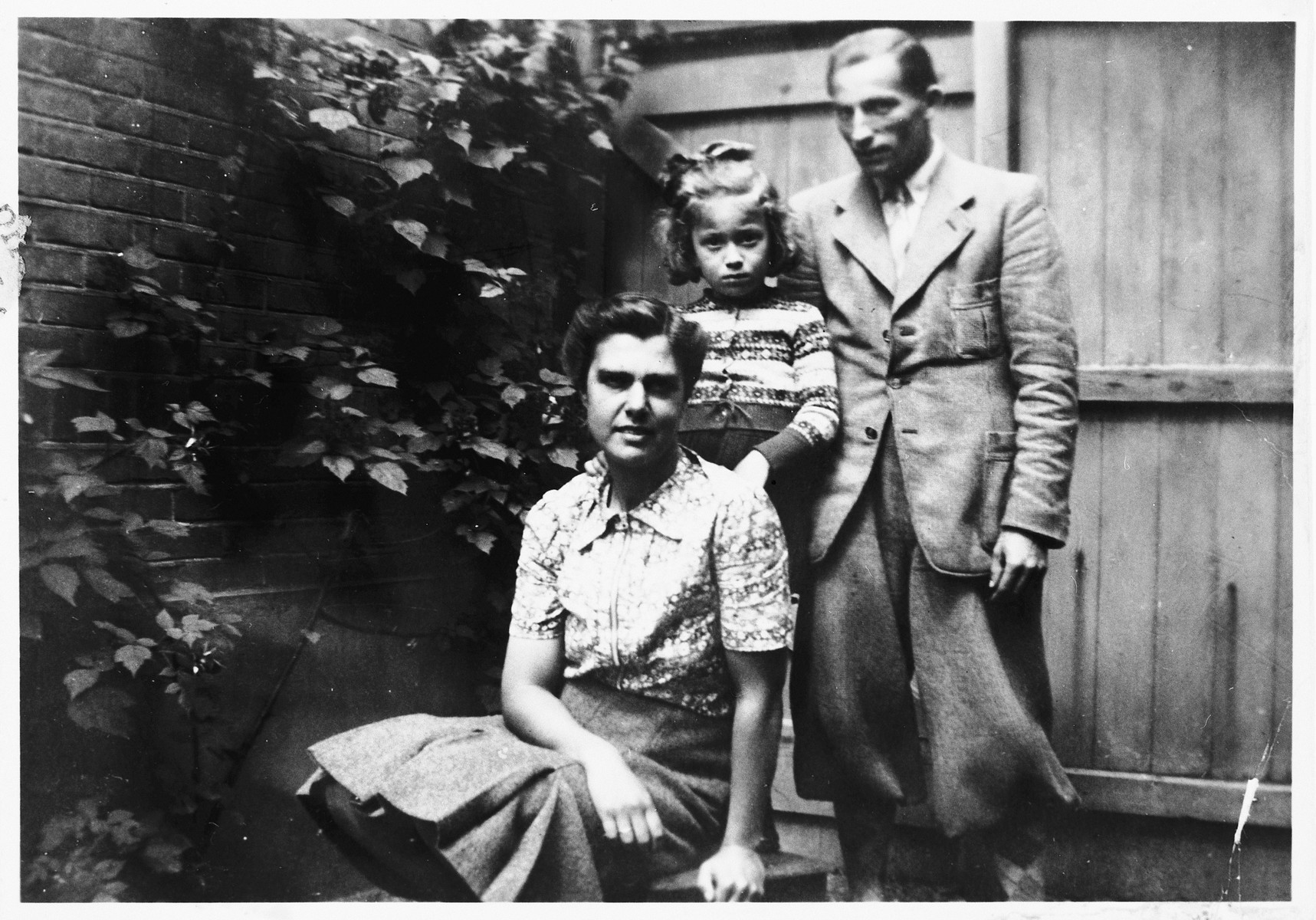 A young Jewish girl poses with the couple who hid her during the German occupation of Holland, prior to leaving their home after the war.

Pictured are Truusje Schoenfeld and her rescuers, Pedro and Truus de Bruin.

Biography
Geertruida (Truusje) Simone Schoenfeld (now Trudy Katzer) is the only child of Walther Isidor and Margareta (Katz) Schoenfeld. She was born July 14, 1939 in Amsterdam. Her parents, who were both born in Germany, moved to The Netherlands in 1936 or 1937 shortly after their marriage. Walther had been a law student in Germany until he was forced out as a Jew soon after the Nazi seizure of power. His two older brothers immigrated to the United States before the war. Margareta (Grete) came from a large traditional Jewish family. Her father was a cantor and teacher in a Jewish school. Grete had eight siblings, seven of whom immigrated to America and Palestine before the war. After moving to Holland, Walther earned a living selling handbags and working for the Jewish Council, while Grete worked as a milliner. Her parents, Levi and Bertha Katz, and brother, Werner, also settled in Holland. The Schoenfelds lived across the street from Mimi Grimberg da Silva Rosa. Mimi, who was a German Protestant, was married to a Jew of Portuguese descent, and their daughter Fransiska was a playmate of Truusje. After the German invasion of The Netherlands, Mimi became active in the underground. As the political situation deteriorated, Grete approached her to find a place to hide Truusje. Mimi secured false papers for the entire family. Subsequently, Walther and his father were deported to Theresienstadt via Westerbork, but both survived the war. Truusje was sent to a Christian family nearby, but she told the neighborhood children that she was Jewish and had to be sent home. Before Mimi could find a new hiding place for her, the Schoenfelds' apartment was raided by the police and the family ordered to report for deportation. Mimi discovered that the family had been arrested the next morning. She rode her bicycle to the courtyard where they were being held, and told the guard that she had lost her wallet and was coming to retrieve it. She entered the courtyard, grabbed Truusje and left. Truusje's parents remained behind. They were subsequently deported to Auschwitz, where they perished. Truusje stayed with one family for several weeks before being transferred to the home of Pedro and Truus de Bruin on the outskirts of Amsterdam. She remained in their home for the duration of the war. The de Bruins passed her off as their niece from the countryside. After the war, Truusje went to live with Mimi and her family until her grandfather Levi and Uncle Werner returned from Theresienstadt. She and her grandfather later flew to Sweden, where they boarded the SS Gripsholm for the United States. She settled in New York and lived with her mother's brother, Siegfried Katz, and his wife, Gertrude, who subsequently adopted her.