The Hertz family walks down a boardwalk while vacationing in Scheveningen. 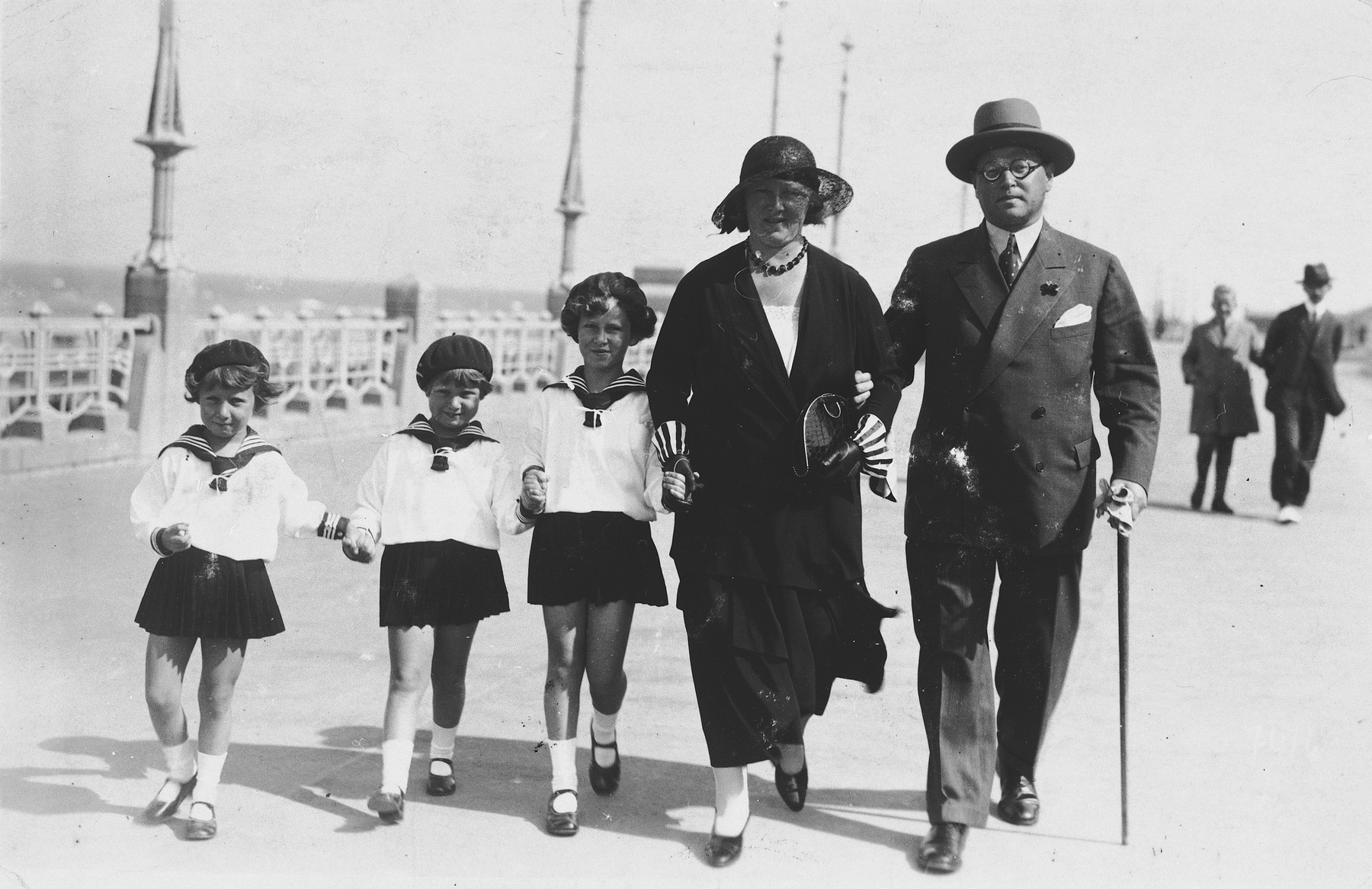 The Hertz family walks down a boardwalk while vacationing in Scheveningen.

Biography
Polly Bergtraun (born Polly Hertz) is the daughter of Alexander Leopold Hertz and Johanna Sophia Hertz-Snoek. She and her twin sister Dolly were born in Amsterdam on April 17, 1925. Their older sister Hella (now Rains) was born April 7, 1923. Johanna was born in Gogh, Germany. She moved to The Netherlands where she met and married Alexander, an affluent importer of California produce. The family was quite assimilated. Most of their friends were Dutch and they did not observe many Jewish rituals. Though Alexander did not believe that Holland would be effected by an impending European war, he nonetheless applied for and was approved for American visas. The visas were waiting for the family in the American consulate in Rotterdam when Germany invaded Holland in May 1940 precluding their ability to emigrate. During the next year the family were subjected to increasing antisemitic legislation. The girls had to attend a special Jewish high school, and Wehrmacht officers boarded in their house. A few months later, members of the SS expropriated their home, and the Hertz family had to move elsewhere. Christian friends urged them to go into hiding, and when Hella received an order to report to labor camp in Germany, the family decided to take advantage of their offer to help. Alexander and Hella went to Haarlem, and Johanna went with friends in The Hague. Over the next two years she had to move to 23 different locations. Dolly was brought to a farm in Almen in Overijsel where six other Jews also were hiding. In July 1942 Polly went to the home of Eddy (1906-1990) and Bep (Meuldijk) Kraijenbrink (1907-1990) and their two young children. Polly helped with housework and childcare and developed a close relationship, not only with her foster parents, but with their extended family as well. Eddy was a reserve officer and Bep worked with the underground. The Kraijenbrinks were friendly with Dudok van Heel, whose husband was a political prisoner. When the Kraijenbrinks later had to evacuate their own home, they and Polly moved into Mrs. van Heel’s estate in Bussum. There Mrs. Kraijenbrink gave birth to a baby girl. Ironically, some of Mrs. van Heel’s relatives were wealthy Dutch Nazis, and when the Kraifenbrinks were running out of food during the severe winter 1944, Polly visited these relatives and nearby farmers to barter clothing for food. When these same Nazi relatives decided to flee to Germany to escape the Allied advance, Dudok van Heel, the Kraijenbrinks and Polly moved into their estate and remained there until the end of the war. Polly was liberated on May 5, 1945 by the Canadian army. A few days later a friend of a friend came and reunited her with her family. Her father had fled to France in the hope of escaping to Switzerland. He narrowly escaped arrest and spent the rest of the war hidden by Catholic priests in Grenoble. Polly’s twin was not as fortunate. Dolly was betrayed and sent to Westerbork. From there she was deported to Auschwitz where she was killed in November 1942. After the war, Polly attended secretarial school in The Hague and in 1948 she immigrated to the United States and worked for the Netherlands Information Service for almost ten years. In 1957 she married Eric Bergtraun an Austrian Jew who survived the war in Shanghai.