The Maccabi motorcycle team prepares to leave Poland for Palestine. 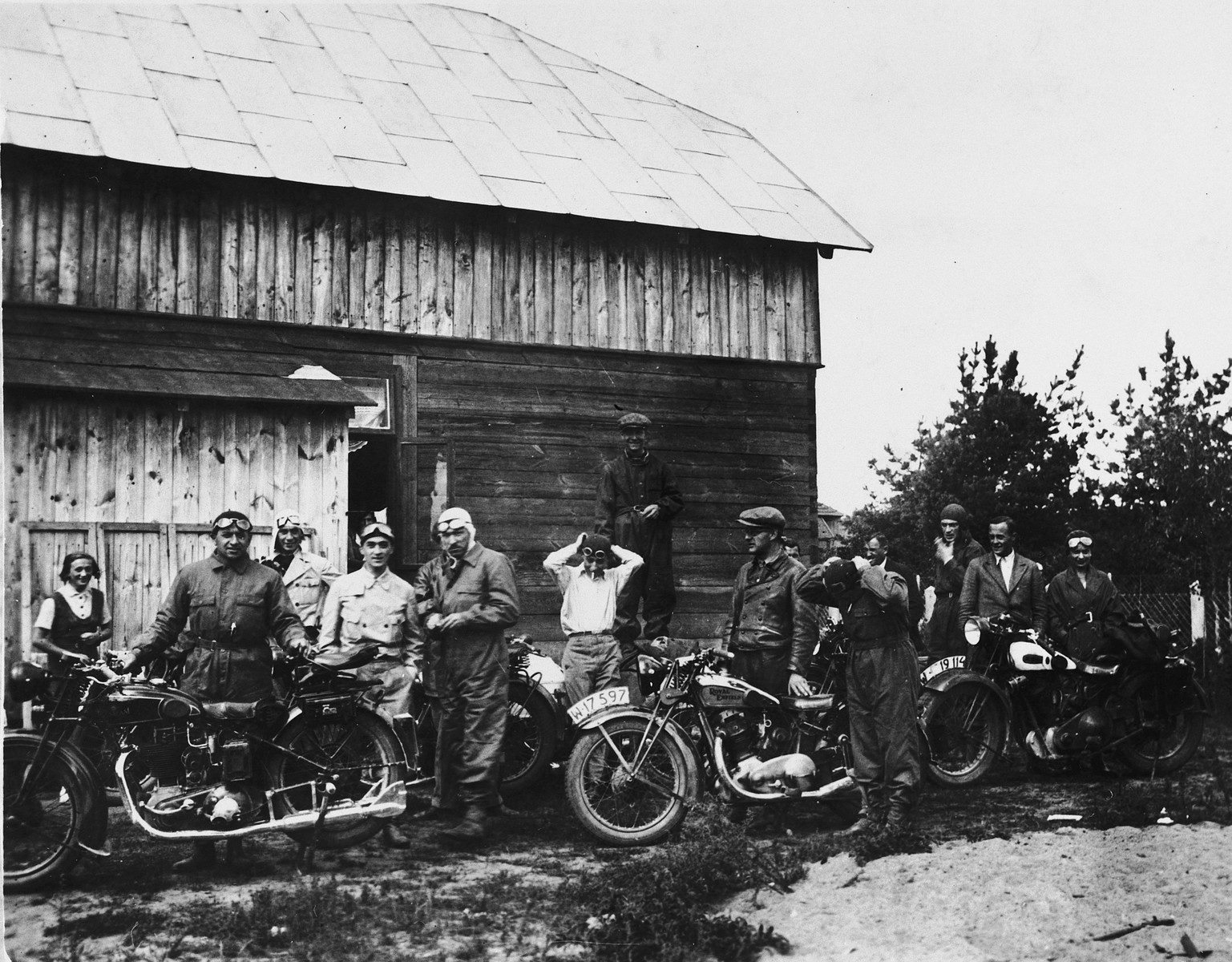 The Maccabi motorcycle team prepares to leave Poland for Palestine.

Among those pictured is Henry Starkopf.

Biography
Johanna Brainin (born Jasia Starkopf) is the daughter of Adam and Pela (nee Miller) Starkopf. Her parents were both born in Warsaw. They married in 1936 and continued to live in the home of Adam's parents, Miriam and Max Starkopf. Adam worked as an office manager and accountant at a leather goods factory. He had one older brother, Henry, who belonged to the Maccabi motorcycle team. In 1933 he went with the team to Palestine, where he defected and remained.

When the war broke out, Adam Starkopf was twenty-five years old. Young men were told to report to Brzesc for military duty, so Adam left together with three family friends: Jerzyk, Lutek, and Rysio Gold. They arrived Brzesc on September 15th, having walked through heavy shooting and bombing. Adam was hit by shrapnel and had to have a toe amputated. When he discovered that Germany and the Soviet Union had divided Poland into two zones, Adam decided to return home so as not to become permanently separated from his wife and parents. He arrived home on October 20 to find that his mother had died suddenly on Rosh Hashanah, in his wife Pela's arms. Thinking that her son must have died in the fighting on route to Brzesc, she had lost her will to live. When Adam initially left, Pela had urged her brother Ben to also go east. When Ben didn't return with Adam, Pela's parents became very upset, and Adam and Pela left again to search for him. Adam found him in a hospital in Kovel, but he had passed away only a half an hour earlier. Wanting to protect Pela from the truth, Adam told her that her brother had escaped to Palestine.

Adam and Pela tried to persuade their parents to join them in the Soviet sector, but when they refused, the couple decided to return to Warsaw so that family could stay together. They returned on New Years Day and Adam opened a toy store to support the family. However, early that spring the Germans looted and shut down their store, and the family was forced to support themselves by selling off their possessions. In October 1940, the Germans ordered that all Jews move into a ghetto; the Starkopfs were already living in the designated area so they did not have to move. Four months later, on January 14, 1941, Pela gave birth to a baby girl, Jasia. In order to support his family and parents, Adam regularly smuggled himself into the Aryan quarter to purchase provisions. On from the Aryan side via the cemetery. They brought him to the Gestapo headquarters, and for the next eight weeks Adam was held at Gesia Street. Pela arranged for his release, only for him to be rearrested three weeks later and severely beaten as punishment. In July the Germans decided to empty the prison and transfer the prisoners to waiting trucks for deportation. The transfer was not carried out in an orderly fashion, and in the ensuing chaos Adam managed to escape. He decided at that point that his family needed to leave the ghetto and try to live as Poles. Fortunately, Adam, Pela, and Jasia all were blond and blue-eyed and did not look characteristically Jewish. With the help of Oskar Galewski, a Jewish friend who was working for the resistance on the Aryan side, they obtained false papers. They took on the identities of Soviet immigrants Adam and Zofia Bludowski and pretended that Adam was a Polish army officer working for the Polish underground. Polish friends also assisted in their escape, including Mr. Kokkinakis, who acted as a surrogate grandfather to Jasia. On July 31, 1942, they escaped through the cemetery after first giving Jasia an injection so that she would sleep soundly. They hoped to bring their parents out after they were safely settled on the Aryan side; however, when Adam returned to the ghetto in early August he learned that his father and in-laws had been deported the day before.

By August 4, 1942 Adam and Pela had rented a room in the home of a Polish peasant in the village of Zambrzyniec. Through friends in Warsaw, they met a young Polish maid named Christina who was caring for a Jewish baby. They invited her to live with them, and in turn, she taught Adam and Pela about Catholicism. Christina later returned to Warsaw when the baby became sick and they lost track of her. Later, Adam found a job in a lumberyard in Sadowne about 400 miles away, near Treblinka, and they moved to a dilapidated cottage belonging to Jozef Rukat. While there, they witnessed local Poles attacking Jews who had escaped from a deportation train to Treblinka. After some time, Adam was promoted to a management position in the lumberyard and the family managed to move into nicer quarters. However, after two other Jewish families who were employed at the lumberyards and posing as Aryans were denounced and arrested, their neighbors became increasingly suspicious of the Bludovakis (Starkopfs). When Pela became sick from an abdominal cyst and required surgery, they felt it was a good opportunity to move away without it appearing as though they were fleeing in fear. During Pela's lengthy hospitalization and recuperation, Jasia stayed in a Catholic convent. After Pela's discharge in March, they returned to Sadowne but left Jasia with nuns. In late April, Adam found a new job with a building contractor named Mr. Kniazew, and he and Pela moved to Siedlce. They were libereated by the Soviet army in the summer of 1944. Following liberation, the family lived in Lublin, Otwock, and Lodz before going to the Feldafing displaced persons' camp in the American zone of Germany. On May 23, 1946 they immigrated to the United States on board the Marine Perch.

[Starkopf, Adam; Will to Live: One Family's Story of Surviving the Holocaust; New York, State University of New York Press, 1995]