Chaim Weitzmann testifies at a hearing conducted by the Anglo-American Committee of Inquiry on Palestine at the YMCA building in Jerusalem. 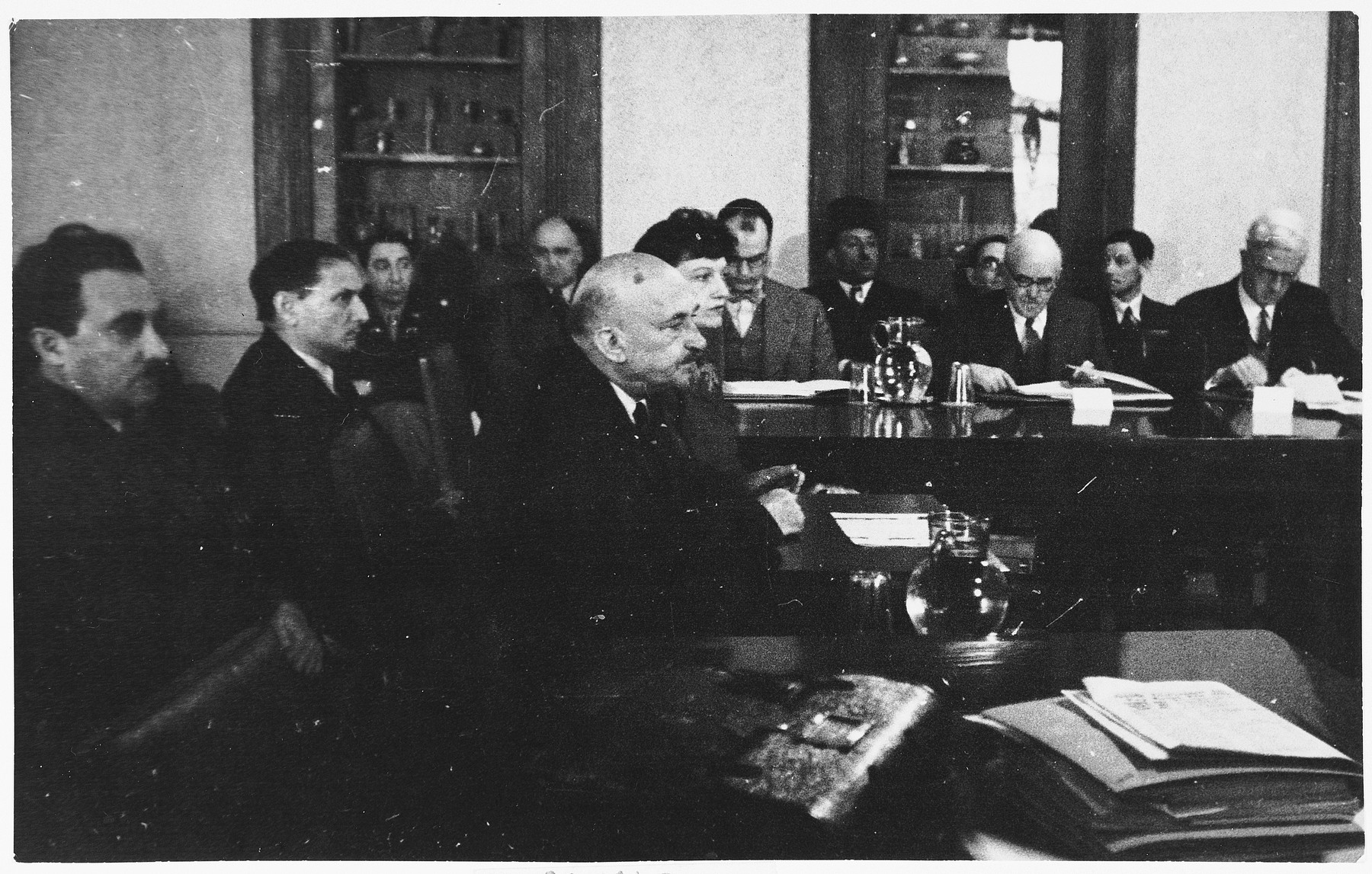 Chaim Weitzmann testifies at a hearing conducted by the Anglo-American Committee of Inquiry on Palestine at the YMCA building in Jerusalem.

Event History
The Anglo-American Committee of Inquiry was established in November 1945 to review the issue of Jewish immigration to Palestine. The British government first proposed the committee as a result of pressure from U.S. President Harry S. Truman, who repeatedly called for the British to allow 100,000 Jewish displaced persons into Palestine. Many considered the committee to be a stalling tactic on the part of the British, who were reluctant to open the gates of Palestine. Truman therefore suggested limiting the timetable of the committee to four months. The committee consisted of twelve members and was co-chaired by Joseph C. Hutcheson, Jr. and Sir John E. Singleton. The six British members were: Sir John E. Singleton, Jr., W.F. Crick, R.H.S. Crossman, Sir Frederick Leggett, R.E. Manningham-Buller and Lord Morrison. The six American members were: Joseph C. Hutcheson, Jr., Frank Aydelotte, Frank W. Buxton, Bartley C. Crum, James G. McDonald and William Phillips, The committee was charged with 1. examining political, economic and social conditions in Palestine as they related to the problem of Jewish immigration and settlement; 2. examining the position of the Jews in Europe who were the victims of Nazi persecution; 3. consulting with representative Arabs and Jews on the problems of Palestine; and 4. making recommendations to the British and American governments about remedial actions that should be taken. The committee assembled in Washington on January 4, 1946, met in London from January 23-February 4, and spent February 5-27 in Europe, where it conducted investigations in France, Germany, Austria, Czechoslovakia, Poland, Italy and Greece. From February 28-March 24 it visited the Middle East, conducting hearings and tours in Cairo (February 28-March 5), Palestine (March 6-28), Damascus and Beirut (March 15-20), Baghdad and Riyadh (March 16-21) and Amman (March 23-24). From the Middle East, the Committee retired to Lausanne, Switzerland, where it concluded its deliberations and prepared its report, which was issued on April 20, 1946. The Committee made several recommendations, including that: 1. 100,000 immigration certificates to Palestine should be issued immediately; 2. Palestine not be allowed to be dominated by either Arabs or Jews; 3. land sales in Palestine not be restricted; 4. the British mandate continue until a future United Nations trusteeship would emerge; and 5. the Jewish Agency for Palestine cooperate with the British government in ending acts of Jewish terrorism in Palestine. The last provision proved a major obstacle. The British government refused to implement the recommendations without the disarmament of the Jewish military underground organizations. The immigration certificates were therefore never issued. Unwilling to implement the recommendations of the committee, the British asked the UN to intervene. It responded by establishing the UN Special Committee on Palestine (UNSCOP) to continue the search for a solution to the Palestine problem.

https://www.ushmm.org/wlc/en/article.php?ModuleId=10005459.
Biography
Chaim Weizmann (1874-1952), first president of the State of Israel and distinguished biochemist. Born in Motol, Russia, Weizmann was the son of a timber merchant. After completing high school in nearby Pinsk, Weizmann set out in 1892 to study in Germany. While studying at the Institute of Technology in Berlin, Weizmann joined a vibrant circle of Zionist intellectuals, who came under the influence of the cultural Zionist ideologue, Ahad Haam. Following the appearance of Theodor Herzl in 1896, Weizmann began an active involvement with the new political Zionist movement. After serving as a delegate to the Second Zionist Congress in Basle in 1898, Weizmann moved to the Fribourg University in Switzerland to complete his doctorate. He taught at the University of Geneva from 1901 to 1904 before deciding to move to England. He settled in Manchester, where he began research at the university and later was given an appointment. In 1906 he married Vera Chatzman, a fellow Russian-Jewish immigrant. He continued to serve in the leadership bodies of the world Zionist movement while he pursued his scientific career. In 1907 he paid his first visit to Palestine, which led him to redouble his efforts to promote practical work there. In 1906 Weizmann had a chance opportunity to explain the Zionist idea to Prime Minister Arthur James Balfour in Manchester. Balfour was instantly won over. During World War I, with the assistance of the editor of the Manchester Guardian, Weizmann expanded his contacts in the British government to include Lloyd George and Herbert Samuel. His access to members of the British government was greatly enhanced by his scientific discovery, in 1916, of a process that produced acetone, a solvent needed for the production of munitions. In connection with this work, he moved to London, where he utilized his contacts to build up a structure of support for his Zionist political program among government leaders. His efforts, combined with other practical, political considerations, ultimately led to the signing of the Balfour Declaration in November 1917, in which Britain expressed sympathy with the goal of establishing a Jewish homeland in Palestine. In 1918 Weizmann was appointed head of the Zionist commission sent to Palestine to advise on the future development of the country. Subsequently, he led the Zionist delegation to the Versailles Peace Conference. Weizmann became president of the World Zionist Organization in 1920, a post he held until 1929, and then again from 1935 to 1946. He also headed the Jewish Agency for Palestine, which was established in 1929. In 1937 Weizmann moved to Palestine and settled in Rehovot, where he laid the foundations for what was to become the Weizmann Institute of Science. During the years leading up to World War II, Weizmann fought in vain to establish the Jewish Brigade and to prevent the enactment of the British White Paper of 1939, curtailing Jewish immigration to Palestine. After the war Weizmann worked to promote the establishment of the Jewish State, using his personal connections with British and American leaders. With the declaration of the State of Israel in 1948, Weizmann was chosen to serve as its first president. He remained in office until his death in 1952.

James Grover McDonald (1886-1964), American professor and diplomat. Born in Coldwater, Ohio, McDonald became a professor of history and political science at the University of Indiana. In 1919 he was appointed chairman of the Foreign Policy Association in New York and served in that capacity until 1933. After several visits to Nazi Germany, McDonald became convinced that the new German regime was going to take radical steps to solve the "Jewish question," and became increasingly disturbed by the indifference of the U.S. State Department to this state of affairs. In 1933, with the help of important German Jewish leaders, including James Rosenberg, Felix Warburg, Mildred Wertheimer, and Arthur and Herbert Henry Lehman, McDonald was appointed head of the newly created Office of the High Commissioner for Refugees from Germany within the League of Nations. However, from the very beginning of his tenure he faced serious obstacles, stemming from his lack of legitimacy as an American commissioner to an organization (the League of Nations) to which his country did not belong. He enjoyed the support neither of the U.S. State Department nor of key League members such as France and Britain. In addition, Germany, which had recently withdrawn from the League, argued that McDonald had no right to interfere in Germany's internal affairs. In 1935, when enactment of the Nuremberg Laws exacerbated the Jewish refugee problem, McDonald decided to resign in a dramatic fashion in an attempt to focus attention on the plight of the refugees. In his resignation speech, which was delivered on December 3, 1935 and published in the New York Times, McDonald accused the German government of pursuing a policy of racial extermination and condemned the members of the League for their inaction. In 1936 McDonald took a position on the editorial staff of The New York Times, and in 1938 he assumed the presidency of the Brooklyn Institute of Arts and Sciences. In July 1938 McDonald was a participant at the international refugee conference in Evian-les-Bains, France, convened by Roosevelt in the wake of the German annexation of Austria. At the same time Roosevelt established the Presidents Advisory Committee on Political Refugees (PAC) and appointed McDonald to be its chairman. The PAC was a quasi-governmental agency tasked to serve as a liaison between the government and numerous private agencies involved with refugees. However, McDonald was given no budget with which to operate. He was also plagued by the opposition of the U.S. State Department, which rejected nearly every suggestion posed by the new agency to alleviate the plight of the refugees. In the fall of 1940 McDonald clashed most directly with the State Department when it refused PAC 's request for permission to grant special visas to prominent European political and cultural leaders. Discouraged, McDonald turned down a vague offer to head the American delegation to the Bermuda refugee conference in April 1943. McDonald's sympathy with the cause of Zionism and his longstanding opposition to British efforts to prevent large-scale immigration to Palestine won him a place on the postwar Anglo-American Committee of Inquiry on Palestine, appointed by President Truman. After the establishment of the State of Israel in May 1948, McDonald was appointed U.S. Special Representative to the Jewish State, and in March 1949, the first American ambassador to Israel. He remained in that position until 1951.