Jewish friends who have met for tea, including the parents of Anne Frank, pose around a table in a private home in Mannheim, Germany, shortly before many of them fled the country as refugees of the Nazi regime. 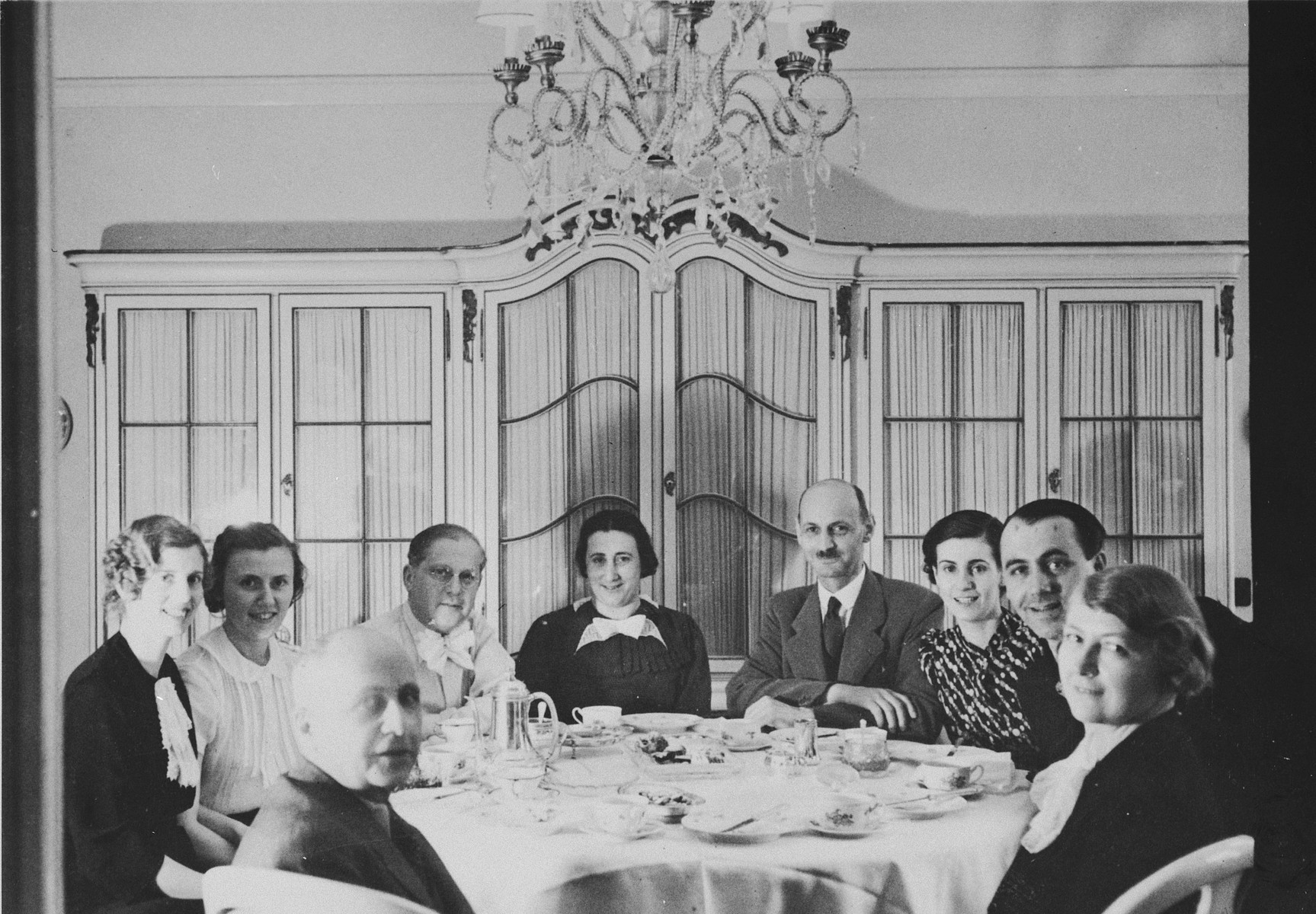 Jewish friends who have met for tea, including the parents of Anne Frank, pose around a table in a private home in Mannheim, Germany, shortly before many of them fled the country as refugees of the Nazi regime.

Biography
Anne Frank (1929-1945), teenage author of a diary composed while living in hiding in German-occupied Amsterdam during World War II. Anne was the daughter of Edith (Hollaender) and Otto Heinrich Frank. She was born Annelies Marie Frank on June 12, 1929 in Frankfurt, Germany, where her father was a moderately successful businessman. Anne had one sister, Margot Betti (b. February 16, 1926). Soon after the Nazi rise to power in January 1933, the Frank family decided to leave Germany. Otto went to Amsterdam, where he had close contacts. He found an apartment and quickly brought over the rest of the family. There, he established the Opekta company, a firm that produced and distributed pectin for use in the preparation of jam. Several years later, in 1938, he started a second company called Pectacon, which produced spices for making sausage. In this business venture Otto partnered with Hermann van Pels, a German Jewish refugee, who had recently fled from Osnabrueck with his wife Auguste and son Peter. Anne and her sister quickly adapted to the new Dutch surroundings and language. They both attended the Montessori school, and the family joined the liberal Jewish synagogue.

After the German invasion of The Netherlands in May 1940, the Frank family soon began to feel the impact of the new anti-Jewish policy. In the fall of 1940, with the help of several non-Jewish friends, Otto arranged for his two companies to be Aryanized on paper so that they could continue to operate. The following year, when Jews were banned from the public schools, Anne and Margot were transferred to the Jewish Lyceum. Already early in 1942 Otto began preparations for moving his family into hiding. He selected the vacant annex to his office at Prinsengracht 263 to be their refuge and slowly transferred the family's possessions. The Frank's decision to activate their plans to go into hiding was precipitated by the receipt of a letter from the Nazi-run Central Office for Jewish Emigration on July 5, 1942 ordering 16-year-old Margot to register for labor service. The very next day the family moved into the annex, and one week later, they were joined by the three members of the van Pels family. An eighth person, the dentist Fritz Pfeffer, who had fled from Berlin in 1938, arrived in November 1942. Only four employees of Otto's companies knew of the "Secret Annex" and took part in the care of the Jews hidden there: Victor Kugler, Johannes Kleiman, Elli Voskuijl and Miep Gies. For the next two years they smuggled in supplies to feed, clothe and entertain the group, often at great risk to themselves.

On August 4, 1944 the Gruene Polizei (Security Police) raided the annex after receiving an anonymous tip. All eight occupants were arrested, as were Kugler and Kleiman (who both survived). One of the police raiders demanded money and jewels from the hidden Jews. In an attempt to conceal the loot, he emptied an attache case he found on the premises that was filled with papers. Among those papers were Anne Frank's journals and photo album. After the police left, Gies and Voskuijl went back into the annex and removed many of these personal items. The eight hidden Jews were taken to Westerbork on August 8, 1944, and on September 3, were placed on the last transport leaving the transit camp for Auschwitz. Upon their arrival in Auschwitz-Birkenau, Hermann van Pels was immediately sent to the gas chambers. Pfeffer was transferred to the Neuengamme concentration camp, where he died on December 20, 1944. All of the women were initially assigned to the women's barracks at Birkenau. Edith Frank died in this camp on January 6, 1945. Anne and Margot were transferred to Bergen-Belsen in October 1944, where they both died of typhus in early March 1945. Auguste and Peter van Pels also died in the spring of 1945: Auguste, somewhere in Germany or Czechoslovakia, and Peter in Mauthausen. Otto Frank was the only member of the group to survive. He was liberated by the Soviets in Auschwitz in January 1945. When he returned to Amsterdam, Gies gave him Anne's journals, and two years later, in June 1947, Otto published the first version of the diaries under the title "The Secret Annex."

Anne's journals cover the period from June 12, 1942, a few weeks before the Franks went into hiding, to August 4, 1944, when the annex was raided. After a year of keeping her diary, Anne began to rewrite some of her entries into stories. In March of 1944 she heard on a clandestine Dutch Free Radio Oranje broadcast from England, that Dutch citizens were being asked to submit their private diaries for collection after the war for historical purposes. This motivated her to rework her diary into a book, a project on which she worked assiduously from May 20 until her arrest. Five notebooks and more than 300 loose pages of Anne's writings survived the war, including numerous short stories, fairy tales, essays and the beginnings of a novel.

Gabrielle Gilbert (born Gabrielle Kahn) is the daughter of Richard and Annelies (Koppel) Kahn. She was born July 24, 1927 in Mannheim, Germany, where her father was an attorney for the Deutsche Bank. The Kahns were a prosperous, assimilated Jewish family. In 1933 after Hitler came to power, the Kahns fled to Paris, leaving almost all of their possessions behind. Gabrielle and her governess were sent to London, but joined her parents in Paris after a few months. Annelies' parents, Paul and Helena Koppel, were on vacation outside Germany at the time of the Nazi seizure of power and elected to immigrate then and there to the United States, rather than return to Germany. Before leaving Germany, Richard Kahn distributed many valuable possessions among friends and family members. The goods were then sold and the resulting revenue supported the Kahns during their long years of wandering. In 1934 the family moved to The Netherlands, where they lived for eight years, first in Amsterdam and then in Amstelveen. While in Amsterdam, the Kahns socialized with the family of Anne Frank, and the children attended school together. Richard Kahn and Otto Frank, the father of Anne Frank, had served in the German army together during World War I. After the war, they remained friends and Richard aided Otto in his business endeavors. When the Germans invaded Holland in May of 1940, the Kahns were living in Blaricum, a village to the east of Amsterdam. During the occupation the Kahns hid for a year and a half with the family of Gabrielle's Catholic nanny, Irene Kaufer. Richard used his legal connections to prevail upon the mayor of Blaricum to erase the family's names from the town register, thus providing them with a measure of protection from arrest. Richard was able to leave the house a few times to go to nearby Hilversum to apply for the documents he needed for his family's emigration. With the assistance of a former law school colleague, who had become a Nazi official, Richard was able to secure these papers in the fall of 1941 and arrange for the family to be picked up by car in the middle of the night and driven out of the country. The family followed a circuitous route through Belgium, France, Spain and Portugal before sailing for the United States. The Kahns eventually settled in upstate New York. They were supported initially by Governor Herbert Henry Lehman, the Democratic governor of New York, who was Annelies' uncle.

Gabrielle (Kahn) Gilbert's sons, Scott and Clement, attended Grace Church School in New York, where the family became friends with the school's administrator, Rev. Al Grant. For a school project, Scott brought in his mother's photos with the Frank family to illustrate his family's background. Rev. Grant made copies of the photographs and ultimately passed them along to his granddaughter, Penny Boyer.