A group of girls enjoy a laugh on the grounds of Chateau de la Guette. 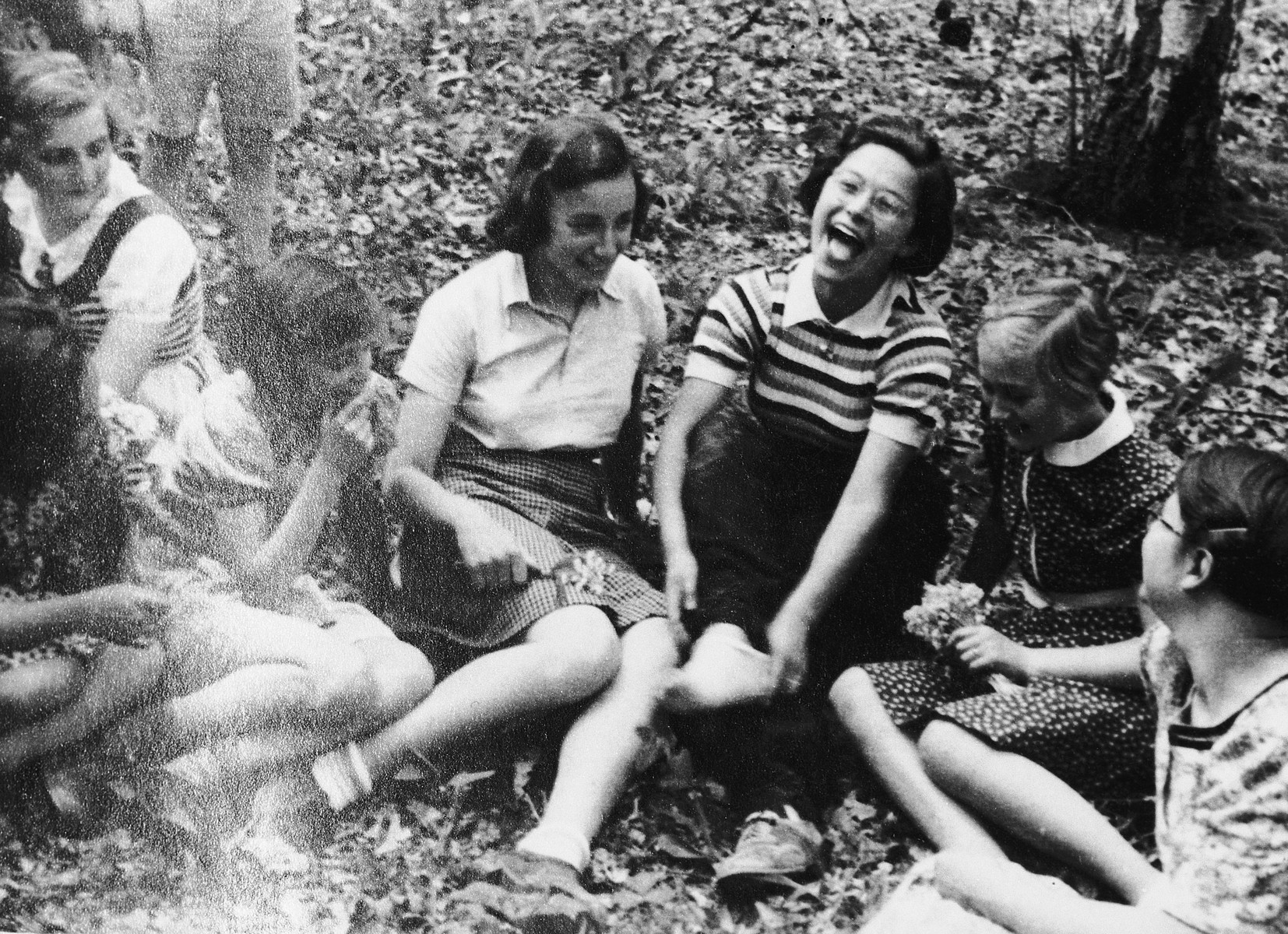 A group of girls enjoy a laugh on the grounds of Chateau de la Guette.

Gisela Edel is second from the right.

Event History
Chateau de la Guette was a mansion owned by Edouard and Germaine de Rothschild located in the Seine-et-Marne district near Paris. Between March 1939 and May 1940, la Guette served as a home for 130 German Jewish refugee children between the ages of nine and fifteen. The home was a major project of Le comite israelite pour les enfants verrant d'Allemagne et l'Europe Centrale, an assistance committee founded by Germaine de Rothschild in the wake of the Kristallnacht pogrom, to get Jewish children out of Nazi Germany and Austria. The children arrived in March and April 1939, in convoys from the Palatinate, Berlin and Vienna. La Guette was directed first by Willy Katz and subsequently by Ernst Jablonski. In the summer of 1939, nine fourteen and fifteen-year-old girls were sent to a boarding school in St. Briac (Bretagne) to learn French. The other children remained in la Guette until it was evacuated in May 1940 to the village of La Bourboule in the Massif Central region where it was directed by Flore Loinger, wife of Georges Loinger. Henry Pohoryles served as an educator. There, the children were housed at the Hotel des Anglais. Some of the older girls worked at the hotel and other establishments in the village, while the older boys were hired as farmhands or apprenticed to local aritsans. Others were sent to a boarding school in Clermont-Ferrand to further their education. At the end of 1941, after the departure of the Rothschilds for the U.S., the home was integrated into the OSE network, and the children were transferred to various centers. In 1942, two groups of children were allowed to emigrate to the U.S. via Lisbon. Of those who remained in France, ten were later deported and all but one perished. A few managed to escape to Switzerland or joined the resistance, and the rest survived on false papers, hidden in monasteries or with French families until the end of the war.
Biography
Naomi Elath (born Gisela Edel) is the daughter of Yaakov Edel and Henrietta (nee Seelig) Edel. She was born on March 12, 1928 in Stettin, Germany where her father worked in a men's clothing store. Though not Orthodox, the family observed the Sabbath rituals and major Jewish holidays. Gisela attended the Jewish Elementary School (Juedische Volkshule) after it opened in 1934. In 1936 the family had to move because the Nazis seized their old home to use as a printing press. Later that year, in December 1936, Gisela's father was arrested supposedly on charges of Rassenschande. He was released about nine months later in October. Gisela witnessed his arrest since she was home recovering from diphtheria, but her mother tried to hold the truth from Gisela telling her that her father was working in another store branch in Hamburg. Yaakov then lost his job after the owner of the clothing store sold his business. Her parents tried to immigrate to the United States but were unable to acquire visas. On the day of Kristallnacht, Gisela went to school as usual to discover that the Gestapo had arrested the teachers. She was told to return home and wait for further announcements. After that she told her parents that she wanted to try to leave Germany. After some time she returned to school and continued attending as before until a social worker came to her home and told her she was going to France. On March 20, 1939 she traveled to Berlin with her mother. There, along with a group of other German and Austrian Jewish children, she boarded a train to France. After spending a few days in the Rothschild hospital in Paris, Gisela was sent to the Rothschild estate, Chateau de la Guette. For a year she lived at the Chateau enjoying its spacious grounds and learning French. However, after the German invasion of France in May 1940, the children were evacuated from La Guette to the village of La Bourboule in the Massif Central region. At the end of December 1941, Gisela moved to another children's home, Le Couret, where she stayed until November 13, 1943. She then was sent to an old age home attached to a convent organized by 10 nuns. She lived there clandestinely under the name Giselle Bedel until the underground arranged for her to join a group of five children who were led by a guide across the Pyrenees Mountains in June 1944. After crossing the border, the children lived in Barcelona for two months and then moved to Portugal where they stayed in a home near Lisbon for another three months. In November 1944 they sailed to Palestine on a Youth Aliyah transport and Gisela went to Kfar Ruppin. Gisela's parents along with the rest of the Stettin Jewish community were deported to Piaski, near Lublin, Poland in February 1940 and perished in the Holocaust.