Five Jewish friends share a park bench by the side of a street in Siedlce. 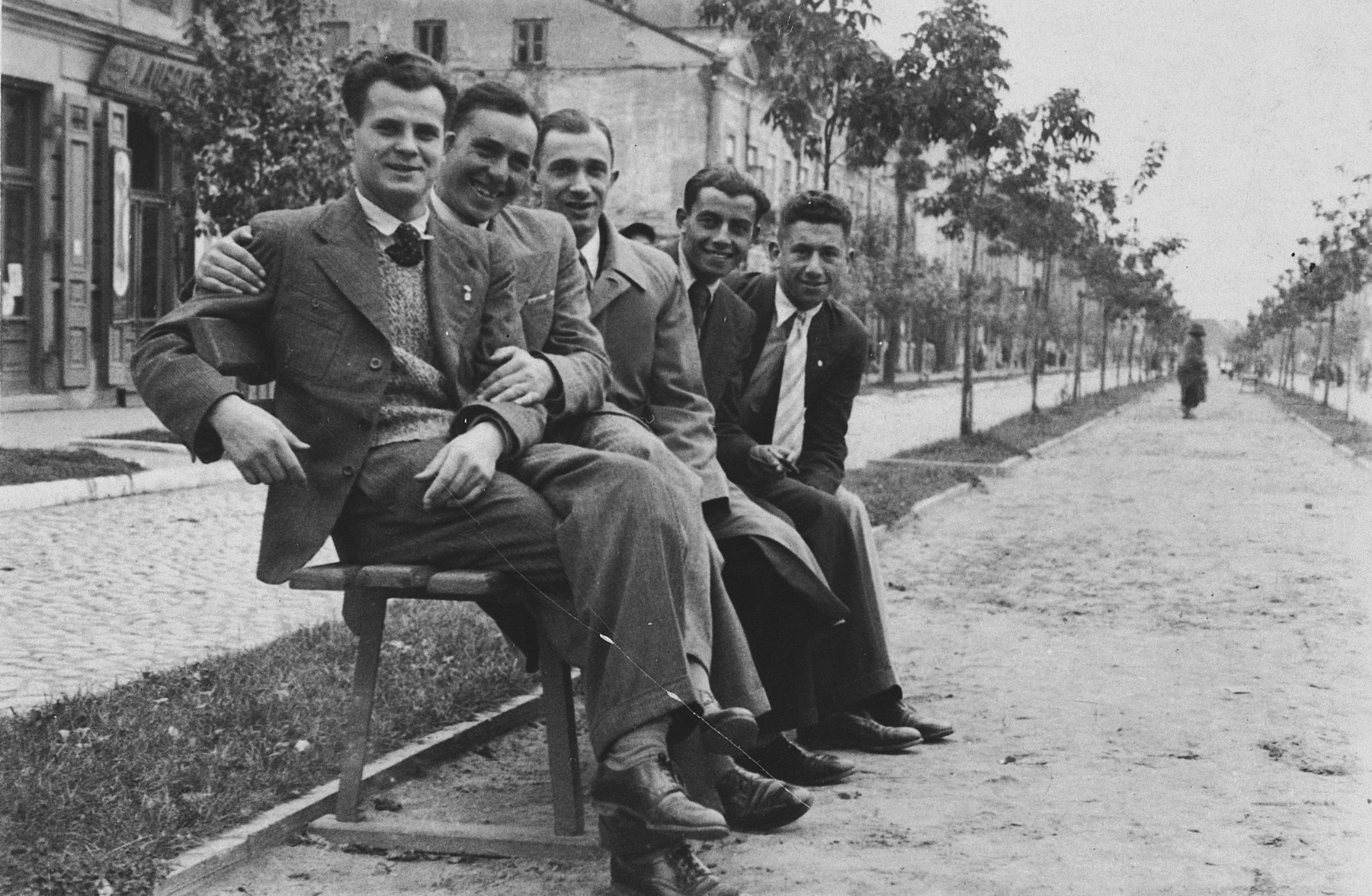 Five Jewish friends share a park bench by the side of a street in Siedlce.

Biography
Jan Emil Karpinski (born Emanuel Alberg) is the son of Izaak Alberg and Frida Zalcman Alberg. He was born on June 2, 1912 in Siedlce, Poland where his father worked as an accountant and secretary for the Yiddishe Kunst (Jewish Writers and Artists Association). Emil's older brother, Baruch Boniek Alberg, was an engineer. In February 1940, about half a year after the start of World War II, the Germans forced them into the Siedlce ghetto. Emil, who had studied law at Vilnius University until 1939 tutored Jewish youth in the ghetto as well as some Polish youth outside the ghetto. Emil's father died in the ghetto in April 1942. During the winter of 1942, Emil joined the Polish Socialist resistance organization and hoped that they would be able to obtain a false identification card for him. His sister-in-law Sala Radzynska Alberg and his nephew Michal found safe refuge with Jozef and Cyla Moskowiak in Warsaw. On August 21 and 22 the Germans started to liquidate the ghetto and deported the residents to the Treblinka concentration camp. Emil's mother was shot and killed during the liquidation action. Emil hid in the local hospital, and at the end of the aktion he, his brother Boniek and 600 other able-bodied Jews were chosen for slave labor. After a few weeks, Emil escaped and hid for a few weeks in nearby villages, but when he was unable to obtain a false identification card, he returned to the ghetto. During the next few weeks he somehow found 2,000 ZL to purchase a false Kennkarte under the name of Jan Emil Karpinski, and on November 11, 1942, he again escaped from the ghetto. Emil found refuge in Lupiny, Poland along with his relative, Jozef Szlichter. In January 1943 the Siedlce ghetto was liquidated. Adela Moskowiak a good friend of he Alberg family rescued Boniek Alberg by bribing a Polish policeman. Unfortunately Boniek contracted typhus and died in Adela Moskowiak's house in spite of medical care that she had arranged for him. In March 1943 Emil traveled to Warsaw and found his sister-in-law and nephew hidden in the Moskowiak apartment. After a few weeks Emil found a job as a general laborer with an electrical company working for the SS. He pretended to be somewhat retarded to avoid contacts with his employer, Komorowski. On one occasion Emil and his boss went into the destroyed Warsaw ghetto to install electrical outlets in the Gesia Street prison where some 600 Jewish men and women were incarcerated. In the spring of 1944 Emil met his high school friend, Dr. Tadeusz Charemza, and he asked him for a cyanide pill in case he was captured. Dr. Charemza refused but instead offered Emil a circumcision reversal surgery which Emil underwent to a few days later. In June 1944 Emil received monetary aid for himself, his sister-in-law and nephew from the American Joint Distribution Committee. It was sent via the Polish government-in-exile in London, England and was distributed by the Committee for Aiding Jews in Poland (Komitet Pomocy Zydom). This money enabled Emil to avoid hunger for the first time since the outbreak of the war. Emil spent some time working for his boss in a village called Pustelnik, near Warsaw, and in August 1944, during the Warsaw uprising, he arranged for Sala and Michal Alberg to join him there. On September 15, 1944, the Soviet Army liberated Pustelnik. After the liberation Emil kept his wartime name. He married Helena Umer in June 1945. They and their three children left Poland and immigrated to Israel in 1968. Sala and Michael Alberg left Poland for Paris in 1947.