Peretz and Eliyahou Siaky pose in the garden with their shovels. 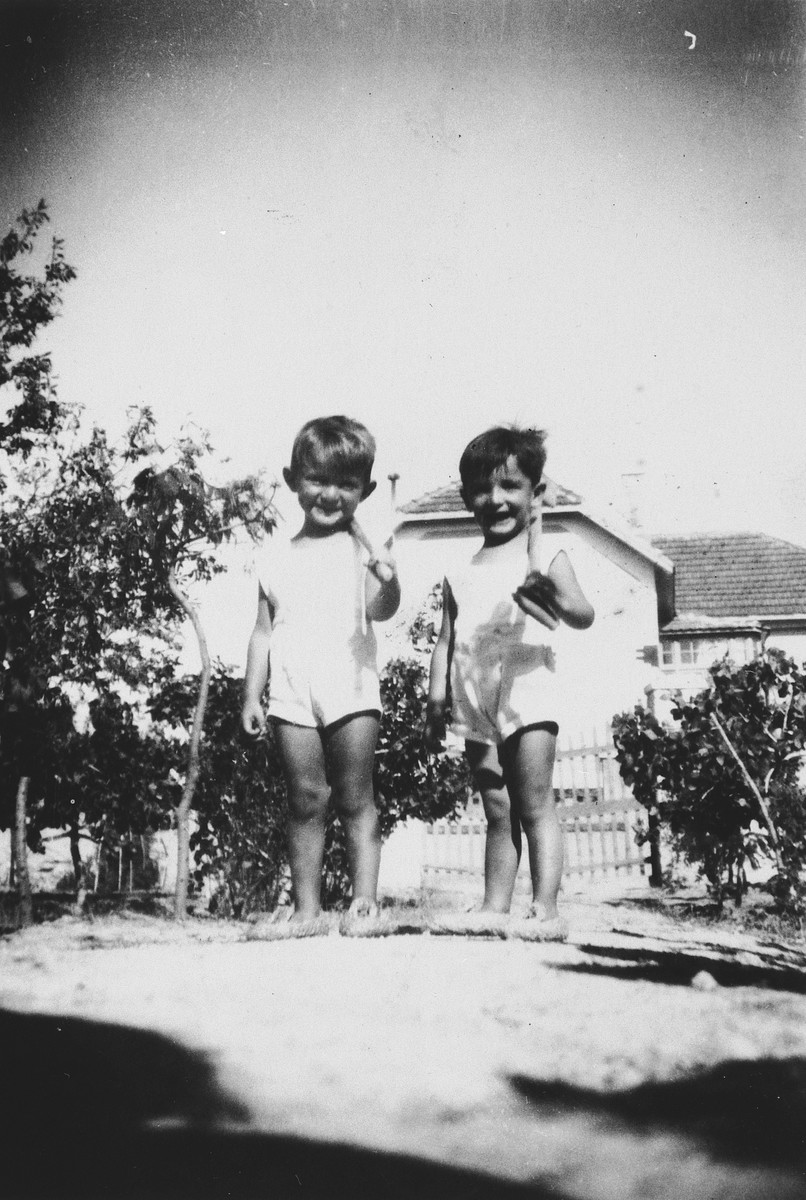 Peretz and Eliyahou Siaky pose in the garden with their shovels.

Biography
Peretz and Eliyahou are the twin sons of Heskiya and Yanna Patzanovsky Siaky. They were born on December 27, 1930 in Athens, Greece. Their father Heskiya was born in 1884 in the town of Larisa, Greece and was a judge in the Supreme Court of Appeals in Athens. The twins have one sister, Hanna, born on August 10, 1941 in Athens. Their mother, Yanna Patzanovsky (b. 1903 in Lodz, Poland) immigrated with her family to Hamburg, Germany when she was four years old. She later moved to Switzerland to work as the director of an orphanage. Heskiyah met her while he was vacationing in Switzerland and brought her back to Athens with him. The twins attended elementary school in Athens and then the American College High School in 1942 and for part of 1943. When persecution in Greece began in September 1943, only about 85,000 Jews lived in Athens. Many local people helped Jews get false identification cards, and the boys obtained them through their father's connections under the names Elias and Petros Papachristou. A lawyer friend of their father's found the family a hiding place in a small town. The family gathered in the central bus station of Athens and went by truck 120 km to the town of Livadia. They lived with a villager named Nikos Kotzikoros who grew olives and other vegetables. The family was given a large room, and they shared a small kitchen and a toilet in an outside shack with the landlord's family. The lawyer's union provided the family with a salary to pay rent and daily expenses. Some neighbors might have known they were Jewish, but they were told that the children had whooping cough and needed the fresh air. Germans were on the alert for Greek partisans hiding in this area, and the boys were interrogated occasionally. The Germans also checked their papers. Once the Gestapo searched their father in the market and asked him if he was a Jew. Since the twins had learned German from their mother, Eliyahou went out into the streets to listen to what the Germans were saying. Once he learned that the Germans had sent a group to burn a house where partisans were hiding, and Eliyahou was able to warn them. He also collected bullets that German soldiers accidentally dropped and gave them to the partisans who came to their house. When the Germans retreated from Greece in September 1944, the family returned to their home in Athens which had remained intact. Their neighbors were very happy to see them, and the boys returned to the American College from 1944 until early summer of 1945. In August 1945 the twins received legal immigration certificates to Palestine. They sailed from Pireas on the 5th of August and arrived in Haifa three days later, accompanied by British warships. After staying in the Atlit immigrant camp for a week, they went to live with an aunt in Kibbutz Givat Brenner. Their parents and sister remained in Greece until their father retired in 1950, and then they also moved to Israel.