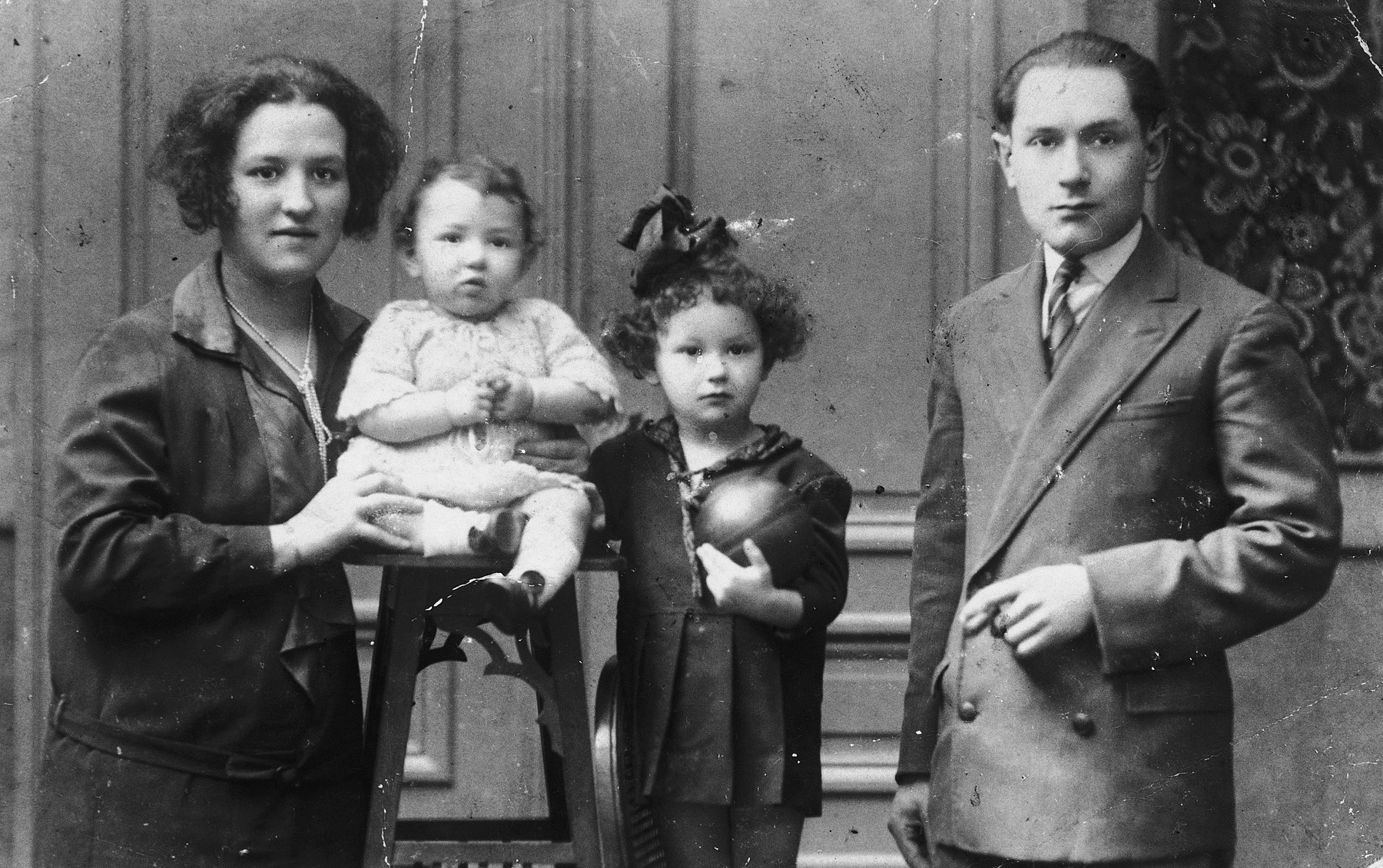 From left to right are Chaja Perla, Catharina, Tauba and Israel Mayer Frydland. Israel Mayer and the two girls perished in the Holocaust.

Biography
Rachelle Bashe (born Rachelle Frydland) is the daughter of Israel Mayer Frydland and Chaja Perla Bornkind Frydland. Rachelle had two older sisters Tauba (b. 1/27/26) and Catharina (b. 9/30/28). Rachelle's parents and older sisters were born in Poland and came to Belgium in either 1929 or 1930. Rachelle was born on June 22, 1935 in Etterbeeck, Belgium where her parents manufactured handbags in their apartment. Her older sisters helped care for her while her parents worked. After Germany invaded Belgium on May 10, 1940 her family fled to Switzerland. After they were turned back at the border into France, they decided to return to Belgium. However, Rachelle's grandmother, Chana Bornkind, whose temporary visa had expired that month was prohibited from returning to Belgium. Instead she was sent to an internment camp in France. Soon after their return, Chaja gave birth to a fourth daughter, Myriam (now Keyes) on December 15, 1940. For the next year and a half, the Frydlands remained in their apartment, though they were subjected to various restrictions including food rationing, wearing a Jewish star, curfews, and expulsion from school. Then in July 1942 Tauba and Catharina received a summons to report for forced labor for the Germans. They were promised that they would be able to return home on weekends. Tauba reported to the police station, but as Catharina was only fourteen-years-old, the family decided she should remain at home. The following week German police arrested Catharina for disobeying orders. Both girls were taken to the Malines transit camp, and in August 1942 they were sent on the first transport to leave from Belgium to Auschwitz where they were murdered upon arrival. Israel and Chaja then decided to find hiding places for their younger daughters and later to go into hiding themselves. Through the intervention of the CDJ (Comite de Defense des Juifs), Rachelle and Myriam were brought to the convent Du Tres Saint Sauveur in Anderlecht. Though Myriam, who was only twenty months old, initially was very scared, both girls soon settled into their new surroundings and routine. They were given new identities as Raymonde and Marie Frere. Eventually, fifteen girls between the ages of 20 months to 12 years hid in the convent. The nuns also sheltered a nineteen-year-old Jewish woman named Gutki Stolnicki who cared for the children like a mother. Rachelle and Myriam lived fairly contentedly in the convent for nine months. Rachelle performed small tasks such as peeling potatoes, shelling peas and making beds for the younger children. The girls lived isolated from the events around them, but on the morning of May 20th 1943 a German Gestapo officer entered the convent to search for Jewish children. He was accompanied by an interpreter and the notorious Jewish collaborator, known as "Le Gros Jacques". They made the children line up while they examined their ration cards. Three children who had returned to school after having been baptized were missing. The Gestapo threatened to arrest one nun for each missing child unless the three appeared the following day. After they left, the Mother Superior, Marie Amelie (Leloup Eugenie), contacted the CDJ and Cardinal Van Roey for help. The Cardinal in turn contacted the Queen Mother Elisabeth who tried unsuccessfully to appeal to the Germans. Meanwhile, members of the Jewish underground, heard of the impending raid and planned an escape in consultation with the Mother Superior. The nuns prepared small bundles of food and clothing for each child, and Marie Aurelie left the children's food ration cards in clear view. In the middle of the night, four Jewish members of the resistance, Paul Halter, Tobie Cymberknopf, Bernard Fenerberg and Jankiel Parancevitch together two non-Jewish colleagues, Floris Desmedt and Andree Ermel raided the cloister and staged a mock kidnapping. They locked the nuns in a room, cut phone lines and ordered the children to get dressed. At first the children feared that the Gestapo had returned until they heard the intruders speaking Yiddish. After the children had safely reached a secure destination, the nuns called for help and notified the police. When the Gestapo came to investigate, the nuns somehow successfully convinced them that they had no part in kidnappings and as a result, suffered no retaliations. From the safe house, the underground brought the children to different locations. Andree Ermel carried Myriam during the escape and subsequently brought her to her own mother, Celine Ermel. Myriam remained with her until August 1951. Rachelle, who was sick with a high fever, remained in the safe house for two days and then went to the home of a widow in Laeken, a borough of Brussels. In addition to Rachelle, the widow was also caring for nine of her own children and another Jewish child. As a result of food rationing, there was very little food to go around, and the children even had to take turns wearing socks and underwear. After some time Rachelle moved to the home of a kind, elderly couple, Mr. and Mrs. Soupart, in La Louviere in southern Belgium where she enjoyed more fresh air and better food. Rachelle remained in touch with them until they passed away in 1957 and 1958. Shortly after the war Rachelle reunited with her mother and then spent time in a rehabilitation sanitarium to recover from a previous bout of scarlet fever and also from pleurisy before returning home. Her father, Israel Mayer Frydland, had been picked up in a raid when he ventured out of his hiding place and sent to a concentration camp. He died in April 1945, shortly before end of war, during a death march from Flossenbuerg. Rachelle's grandmother returned from a French internment camp but died from tuberculosis on March 1, 1948 at the age of 67. Myriam remained with her rescuers until 1951 when she, Rachelle and their mother immigrated to the United States on board the SS Washington. In 2001 Yad Vashem honored Sister Marie Amelie, Andree Ermel and her parents Marcel and Celine Ermel as Righteous Among the Nations. Rachelle has nominated Mr. and Mrs. Soupart to be recognized as Righteous Among the Nations as well.