Czech soldiers stand at attention in front of the Czernin Palace. 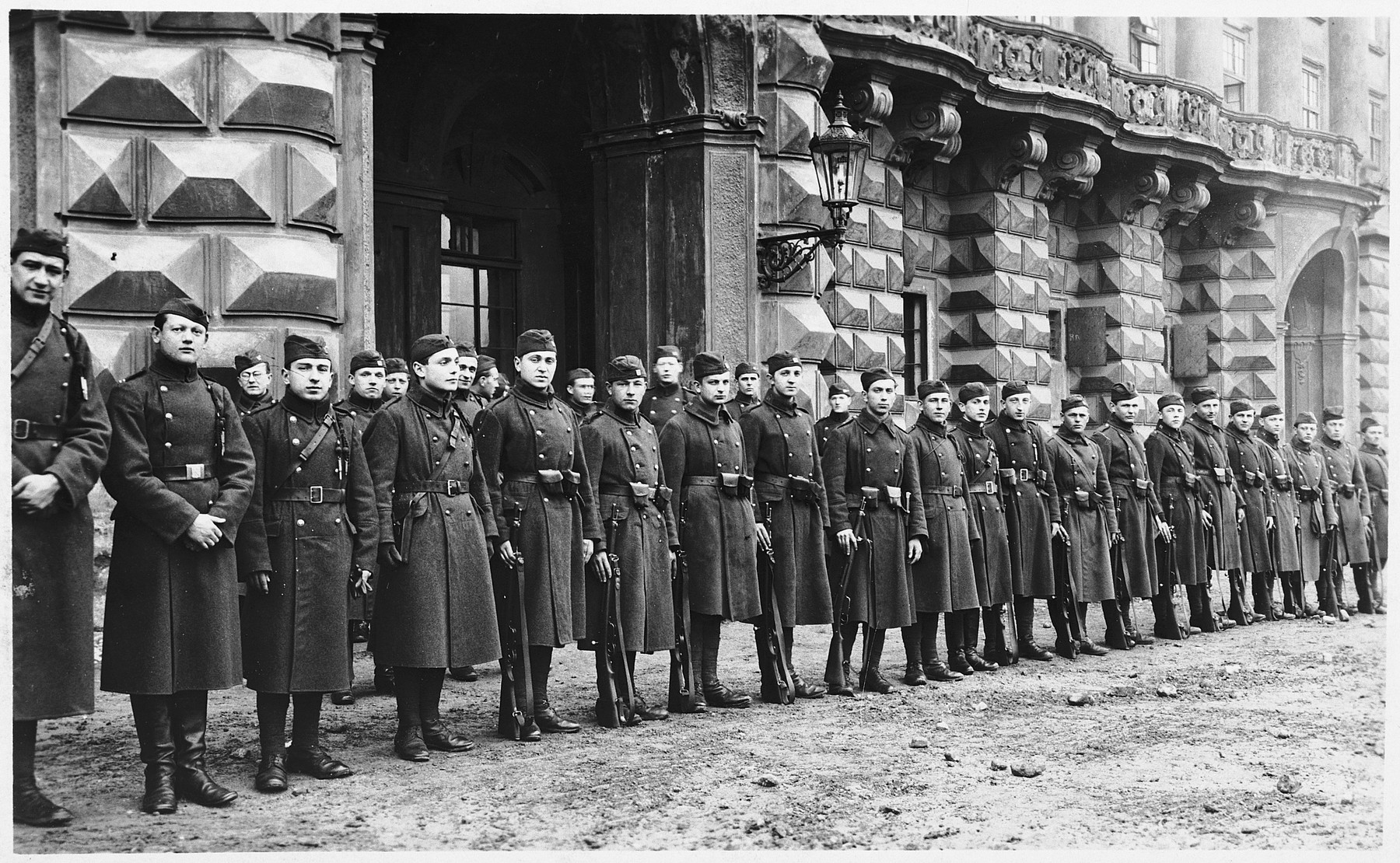 Czech soldiers stand at attention in front of the Czernin Palace.

Ota Margolius is pictured fourth from the left.

Biography
Ines Renner (born Ines Margolius) is the daughter of Ota Margolius and Katerina Spitzer Margolius. Ines was born in Prague on October 8, 1931. Ota was born on February 4, 1905 in Prague, and Katerina was born December 14, 1906 in Tullnerbach, Austria. Ota served in the Czech army 1925 for a year and a half. After his discharge he worked for his father's spirit distillery and wine distribution business. Ota was also a superb athlete and played most sports. He was a member of the Czech national field hockey team and a leader of the Jewish sports club, Hagibor in Prague. He met Katerina through Hagibor. She had attended art school in Vienna and worked as a milliner. They were married on October 28, 1930, and the Hagibor club presented them with a photo album as a wedding gift. Katerina's brother, Joseph Spitzer, moved to Chile before the war with his wife and daughter. Ota also could have received a visa for Chile or Cuba in 1937 but he refused to go both because as a Czech patriot he did not want to abandon his country, and he also did not want to leave his elderly parents alone. However, after Germany took control of Bohemia, the following year, he tried to get immigration visas for the family for America, but was unsuccessful. On August 8, 1942 the Margolius family was deported to the Theresienstadt concentration camp. All of Ota's family was also sent there. The following year, in August 1943, Ota's parents, Gustav and Gisela Margolius, and his sister and brother were deported to Auschwitz where they perished. Ota, Katerina and Ines remained in Theresienstadt until October 28, 1944 when they too were put on a transport to Auschwitz. However, Ota and nineteen other young men were pulled from the train and forced to bury the remains of prisoners who had been killed earlier and destroy all evidence of such activities. Upon completion of their work, these twenty men were massacred. Katerina and Ines arrived in Auschwitz but after a couple of days they were transferred to Bergen Belsen on November 4, 1944. They remained there until February 7, 1945 at which time they were sent to Buchenwald. Finally as the war was winding down in April, 1945 they were sent back to Theresienstadt where they were liberated by the Red Army on May 8, 1945. After the war, Katerina and Ines moved to Chile to be near her brother Joseph. Ines met her husband Armando Renner in Valdivia, Chile and they married in January 1949. Armando was born in Budapest and immigrated to Chile in 1939. His parents, a sister and brother were saved by Wallenberg. Another sister were killed in the Holocaust with her husband and two children.