Faculty and students in the Jewish high school in Czestochowa. 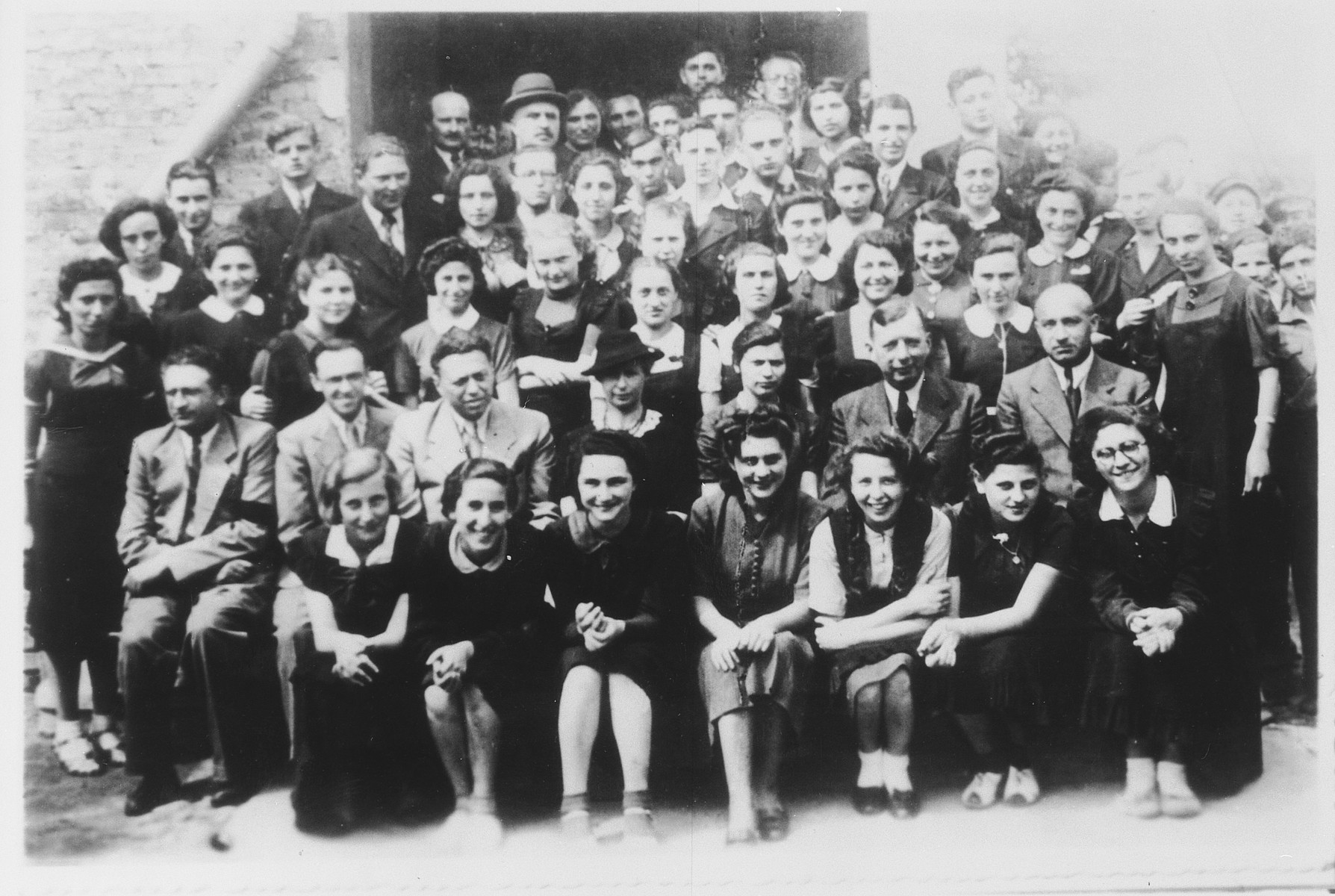 Faculty and students in the Jewish high school in Czestochowa.

Leopold Pfefferberg, the physical education teacher, is pictured in the fourth row, third from the left.

Biography
Ludmilla Pfefferberg Page (born Ludmilla Lewinson) ) is the daughter of Dr. Zygfryd Lewinson and Dr. Maria Lewinson. She was born on July 15, 1920 in Kishinev, Romania where both of her parents worked as physicians. Her father was born February 2, 1887, and he died of natural causes before the war on December 8, 1934. Ludmilla's mother was born March 23, 1889. The Lewinsons moved from Romania to Lodz, Poland. In November 1939 Ludmilla was deported from Lodz to Krakow where she met Leopold Pfefferberg.

Leopold Pfefferberg (later Page) was the son of David Pfefferberg and Mina (Goldfluss) Pfefferberg. He was born on March 20, 1913 in Krakow, Poland where his father was a business representative and his mother was an interior decorator. Leopold's younger sister Pauline was born in 1915. Leopold graduated from both high school and Jagiellonian University in Krakow. He earned his masters degree from the university in philosophy and physical education and taught high school until the start of World War II when the Germans closed all Jewish schools. He then did forced labor for the Germans. Leopold and Ludmilla married on July 7, 1940, and then were forced into the Krakow Ghetto in March of 1941. Two years later, in March of 1943, Leopold and Ludmilla were sent to the Plaszow concentration camp. Leopold was then transferred to Gross Rosen concentration camp, and Ludmilla was deported to Auschwitz in November 1944. She remained there for three weeks until Oskar Schindler intervened to transfer her to his new plant in the Brünnlitz concentration camp in Czechoslovakia where she reunited with Leopold. Leopold and Ludmilla continued to work for Oskar Schindler until their liberation by the Soviet army on May 8, 1945. After liberation, Leopold spent several weeks recuperating from dysentery in Brünnlitz. After he recovered, he and Ludmilla tried to go to Palestine. They stayed in Budapest for three months, but were unsuccessful in reaching Palestine. Finally, they decided to illegally go to the American zone of occupation in Germany via Czechoslovakia in December 1945. They lived in Munich for a year and a half while waiting for papers to move to the United States where Leopold worked for U.N.R.R.A. as a director of an education center for displaced children. In April, 1947, they left for New York with the assistance of the Joint Distribution Committee. Leopold and Ludmilla left from Bremen and traveled to New York on the "Marine Perch." They stayed in New York until 1950 and eventually moved to Beverly Hills where Leopold opened a leather goods store.

All of Leopold and Ludmilla's immediate family perished in the Holocaust. Leopold's parents were killed in either 1941 or 1942. His sister and her husband Edward Digmant were caught with Aryan papers. They were arrested and executed in a Warsaw prison in 1943 or '44. Ludmilla believes her mother was killed in 1942 in Belzec. Leopold also lost almost 100 members of his extended family including numerous aunts, uncles, and cousins.

Leopold constantly pitched the idea of writing a book about Oskar Schindler to anyone he could think of. One day the Australian author Thomas Keneally came into his store and learned of Schindler's rescue work. Schindler's List was published in 1982 and became an international best-seller. Leopold eventually persuaded Steven Spielberg to direct a movie based on the book.